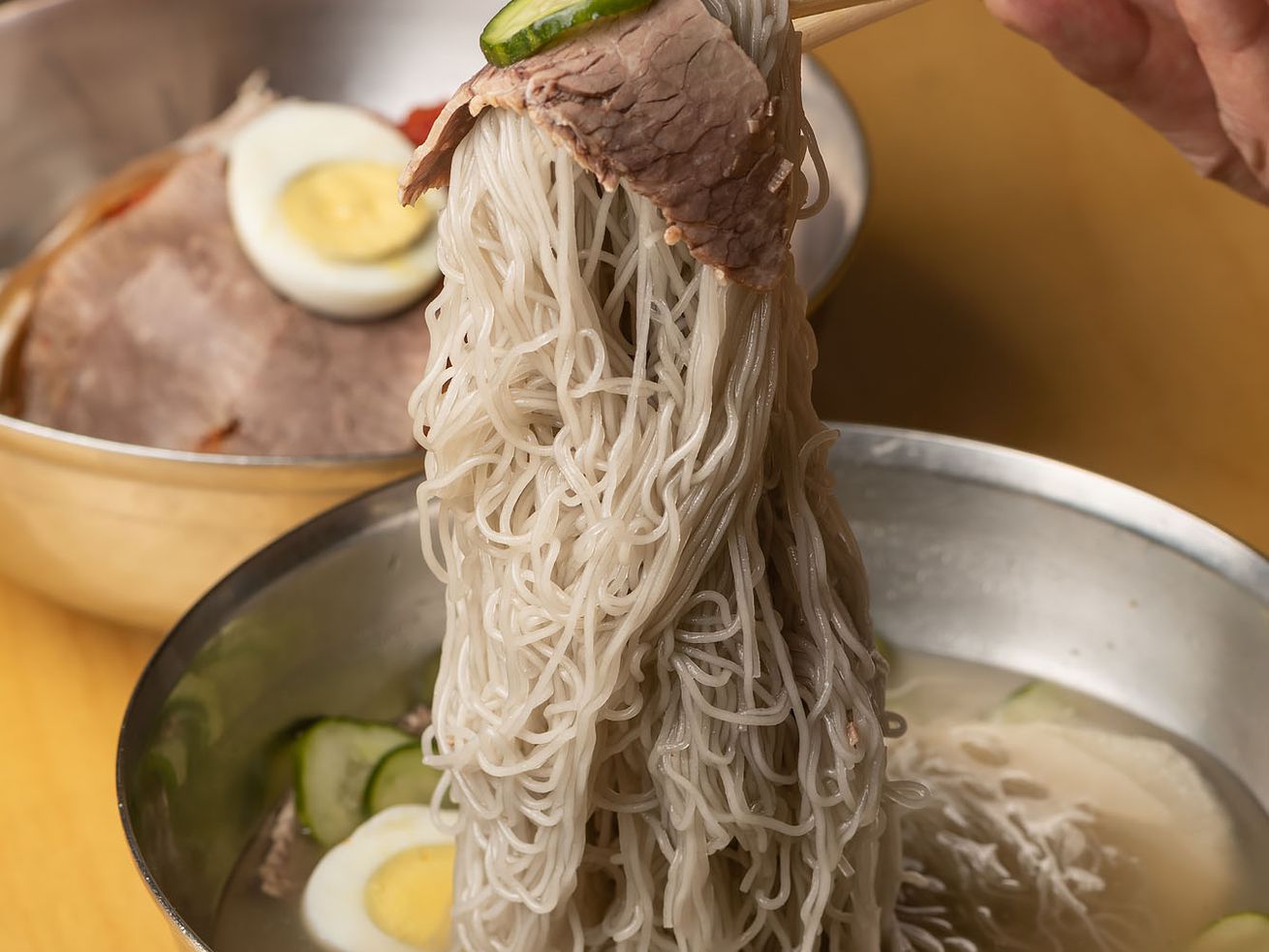 “I remember when we used to do 1,000 noodles a day,” Samuel Oh says in longing disbelief. Ham Hung is slow, and it’s about 6:30 on a Wednesday night. Earlier, he was up on the roof trying to repair the vent hoods (Sam is the owner and handyman of the restaurant), but it started raining so the fix will have to wait. Los Angeles is cold and murky just days before Memorial Day weekend, and that’s not great news. Sam has a scorned looked on his face as he glances out the window.

His seasonal depression seems to be a little more acute because Ham Hung specializes in naengmyeon, the refreshing North Korean cold noodle that made a stir at last year’s Korean Summit in Seoul, when North Korean president Jim Jong Un said he had brought some of the dish to share with South Korean president Moon Jae-In.

Naengmyeon is a seasonal dish for the older generation, best when eaten in the thick of summer heat. Served with a cup of piping hot soup broth, there’s a constant warming and cooling of the body between the ice cold and steaming hot broths. Back home in Hamhung, North Korea (where the restaurant gets its namesake), a lot of cold noodle restaurants close in the winter. Not here in Los Angeles, where Oh serves both Hamhung style naengmyeon (bibim-naengmyeon) and Pyongyang style (mul-naengmyeon) year-round. For better or worse, it’s the dish on which he proudly hangs his hat.

Everything about Ham Hung is a throwback. Even the extruder Sam uses to make his noodles was built in 1985 (the same year Ham Hung opened). The machine is American-made, a rarity because it’s almost easier and cheaper to get them shipped in from Korea. The one at Ham Hung, however, includes a vat that holds 50 gallons of water, which Sam tells me is about double the size of any other extruder reservoir in the city. That means the restaurant had the capacity to handle a tremendous number of orders, although those days have passed.

The extruder, now over 30 years old, is elegant yet massive, operating on hydraulic oil like a meat grinder in a butcher shop. The stainless-steel shines bright because it’s has been cared for, kept in pristine condition like a relic in a church. There’s something beautiful about its impracticality. It takes up one entire corner of an already cramped kitchen space.

As Sam feeds the potato starch dough through the machine, the noodles spill directly into near-boiling water. Most days, the massive vat only has to boil single orders of naengmyeon at a time. After about 10 seconds of whisking around the noodles with a fine mesh sieve, Oh immediately pulls them to out and shocks them in an ice bath before placing into a stainless steel boil. The entire process, from extruder to water to bowl, takes just under 2 minutes. It’s difficult to find noodles as fresh as this anywhere.

Chilly beef broths and cold noodles haven’t really made much headway in the American culinary lexicon. Looking around the restaurant, naengmyeon seems to be a hard sell to the traditional American palate. The Pyongyang style consists of buckwheat noodles served in an icy broth made of brisket and dongchimi, a thin pickling liquid. However, there’s a lot of familiarity in the bibim-naengmyeon. For starters, it’s dressed in dadaeki (red chili paste), a touchstone for people with a base level knowledge of Korean food. Sam uses a secret recipe for his own dadaeki, and it tastes unctuous and tangy. Ham Hung style noodles aren’t weighed down by too much gluten. They’re easy to digest, keeping you moving even on the hottest of days. Bibim-naengmyeon is typically made with potato starch, and it’s difficult to beat the freshness and quality of the ones at Ham Sung.

Oh’s recipe, something he has tweaked over decades, calls for the addition of sweet potato starch and roughly 5% wheat flour. This combination creates maximum elasticity, making the noodles undeniably resilient and delightfully chewy.]

There aren’t many restaurants in America focusing on naengmyeon because it’s not a profitable model. Sam says the dish is often an accessory to Korean menus in Los Angeles, not a specific focus. Plenty of restaurants are content with using frozen noodles instead of going through some arduous process of making the dough process and purchasing expensive, bulky machinery. That’s the great thing about Ham Hung. The restaurant bends over backwards to serve a brilliant, yet underappreciated dish. When Sam took over the restaurant from his parents in 1998, they beat it into his brain to stay traditional.

He now seems equal parts regretful and proud, “I don’t make that much money. Why do I go through this? It’s just stubbornness,” he says. Sam relies on the older Korean generations, a generation that has a specific craving for cold noodles, and a generation that Sam says is dying off. He points to another gentleman across the restaurant, who looks to be a bit younger than Sam, “He had no clue what it was. His parents never showed him,” Oh says.

Unlike restaurants in North Korea, Ham Hung won’t close in the winter. Sam serves galbitang (beef short rip soup) and kimchi stew with pork belly to cater to the winter crowds. Currently, he supplies the Netflix offices with chicken and pork bulgogi a few times a week through a new catering service called Eat Club. He finds ways to make money when the sun doesn’t shine. Still, he’s got a 50-gallon vat of boiling water ready to go at a moment’s notice should there be a surge in cold noodle interest. It might not ever happen, but the flavors and practices of naengmyeon demand acknowledgement. In the meantime, like a lot of people in Los Angeles, Sam stares out the window, waiting for people to notice his hard work.