Outside a La Brea Avenue strip club on a recent Friday night, protesters drew stares, supportive horn honks, and the occasional catcall from interested passersby. Above them, Crazy Girls’ blue neon sign promises “Live Girls Girls Girls,” but the 20-plus dancers, activists, and allies gathered on the sidewalk have signs of their own, featuring slogans like “Heels On, Walk Off” and “Abolish House Fees, Don’t Pay to Work.” One protester with a megaphone leads the others in chants: “Hell no, we won’t pole!” and “Club owners are telling lies, strippers need to unionize!”

“We’re out here because the change in employment status has gone from independent contractor to employee,” says Antonia Crane, a stripper, sex worker, writer, activist, and one of the leaders of Soldiers of Pole, the pro-unionization group responsible for organizing the protest.

In the Spring of 2018, the California Supreme Court issued a seismic ruling clarifying and restricting what constitutes an independent contractor. After decades of being classified as contractors, exotic dancers are now considered strip club employees, which means they’ll enjoy laws governing minimum wage, discrimination, sexual misconduct, worker compensation, and other protections.

As clubs have begun to transition to the new reality, dancers claim there’s been pushback and foul play. “A lot of the girls are saying that [clubs are] manipulating the numbers and they’re not getting paid for all of the hours they work,” says Domino Rey, a former Crazy Girls dancer and member of Soldiers of Pole.

While protests are one way dancers can get the attention of a club’s management, they’re also launching a unionization effort. “We have a right to force management to come to the table and abolish stage fees and wage theft and racist business practices and make a safe and sane work environment for dancers,” Crane says. “The only way to do that is to unionize.” 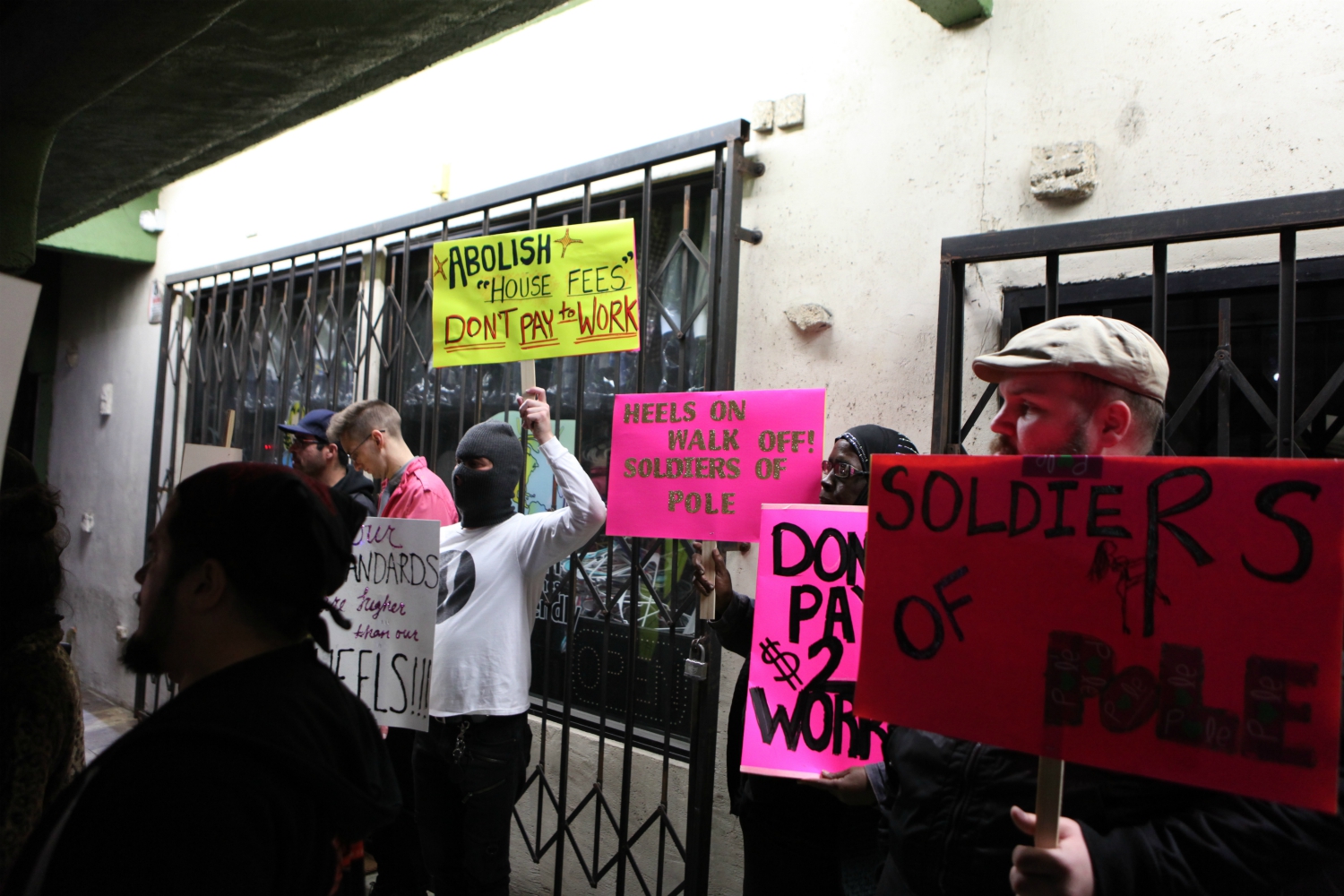 Long before the idea of a “side hustle” entered the zeitgeist, strippers found themselves relegated to the same category as more traditionally self-employed professionals like electricians and plumbers. Independent contractor status “is often seen as a way for employers to shirk responsibilities such as worker’s compensation, payroll tax, [and] providing benefits that might customarily be provided to other people considered employees,” explains Thomas Lenz, a labor law professor at USC Gould School of Law.

In the late 1980s, a notorious San Francisco strip club, the Mitchell Brothers O’Farrell Street Theater, stopped giving its dancers a wage. Instead, performers would have to pay the theater in exchange for the chance to earn tips. These “house fees” became increasingly higher and more common by the ‘90s, according to Crane, in part as a result of aggressive expansion by chains like Spearmint Rhino and Déjà Vu. She points to San Francisco, where Déjà Vu purchased scores of locally owned strip clubs in 1997, some of which Crane worked for at the time, and experienced the implementation of the new fees.

As independent contractors, dancers were also left without protections against discrimination or recourse for labor disputes. “There was a period of time in which I was treated differently, and even if I was allowed to stay because my pole tricks got really good or I was a valuable employee, I noticed that my other sisters of color were not able to stay as long,” says NatsHoney, a stripper and cannabis entrepreneur who did not attend the rally.

According to demonstrators at the Crazy Girls protest, dancers were often vulnerable to sexual misconduct as well. “I was sexually assaulted in my club and ended up getting fired over the incident,” Zara Moon, a local dancer, says. “It was pretty frustrating to come to my management and try to explain what happened—this very traumatic event that happened—and instead of being treated like a human being, I was treated like a liability.”

Dancers have won numerous cases over the years in which courts have validated their employee status, netting millions of dollars in damages and lost wages, but strip clubs’ hiring practices drew little lawmaker scrutiny until more traditional (read: male) lines of work felt the impact. The Court’s decision, Dynamex Operations West Inc. v. Superior Court, clarifies that employers can only designate someone as an independent contractor if their work falls outside of the main scope of the business. Dancers in a strip club, it follows, would not fit this definition. They are the business.

According to Crane, the change in status hasn’t stopped clubs from implementing bogus policies, like requiring performers to do their first handful of dances for free, while the club pockets the tips. She accuses Spearmint Rhino and Déjà Vu, one of the largest strip club chains in the world, of offsetting their new tax burden onto the dancers in an unfairly punitive way. “They use the money that they collect from us to pay some sort of payroll tax, federal and state taxes,” she claims.

Déjà Vu has been at the center of multiple class action lawsuits in recent years, including an ongoing suit in California involving more than 5,800 dancers at 25 California clubs who say they were wrongly categorized as independent contractors. As recently as January, dancers filed a second class action suit alleging that Déjà Vu had slashed pay in retaliation for the first. Crane believes it was an effort to make employee status as unappealing as possible. While the club points to increased administrative costs and employee-related taxes, the suit argues that dancers’ pay has been diminished “far beyond any amount that would be arguably justified to offset their increased costs in classifying the dancers as employees.”

In the fall, dancers at Déjà Vu found a notice posted in their locker rooms preparing them for the change of status. According to a photo taken by one dancer who asked to remain anonymous, the notice read that due to “lawsuits and ongoing demands by the suing dancers and their attorneys, the club is now being compelled by Court order to eliminate the independent contractor option and require all dancers become the club’s employees.”

Another L.A.-based club has circulated a “Release of Claims Contract,” according to one dancer, that would protect the club from any former claims of wage theft. “‘The ‘Dancer’ further represents that she will not file any lawsuit…in any court, at any time regarding any acts, promises, allegations, utterances, writings, representations, rumors or omissions” that took place before the agreement, reads a PDF of the contract. In return for signing the legally suspect contract, the dancers receive $119, says the woman, who asked to remain anonymous out of fears of losing her job.

The clubs’ anti-employee-status campaign may be working. As they begin showing up for work on the night of the protest, Crazy Girls dancers seem unreceptive, almost hostile, to the outreach. One protestor slips a tube of pink lip gloss featuring Soldiers of Pole’s information to a dancer with green hair, as if she were passing a note during class. In response, the dancer vigorously thumps the tube down onto a nearby ledge. A bouncer proceeds to picks it up and casually tosses it into the street.

As the night progresses, some of the club’s other workers succumb to their curiosity and wander nearer to the crowd. One security guard asks what they’re protesting.

“We should be, but we’re not,” another stripper chimes in.

“What do you mean you should be?”

Crane says that Soldiers of Pole has spoken with two unions that could potentially back a strippers’ union. Support from an established union would give Crane and the Soldiers the “resources to effectively reach the dancers inside all of the clubs and communicate and unify.” Any potential union would need to receive a simple majority among its constituent dancers, so messaging plays a big part in the run up to a vote for both the pro-union dancers along with the (typically) anti-union management.

Crazy Girls’ management blames the doorstep protest on prospective dancers that get rejected and current dancers that get disciplined. “I just know we have a lot of girls that get upset, that doesn’t get hired, or when they’re problematic inside the club,” says Sergio Blandino, general manager of Crazy Girls.

“They try to retaliate and try to sue or try to protest, or go to go to the news or write papers or Instagram bash,” he says. “But a lot of these girls—I mean, they’re exotic dancers, you know what I mean? So they’re all opportunists. Those are the girls that they’ll do anything for a money bag.”

But according to Crane, their goals go beyond money. “Our hugest priority is probably a safe and sane work environment,” she says. “That looks like having a hand in hiring security and what security means and looks like, rather than just having a circle of bros and people who are lazy.”