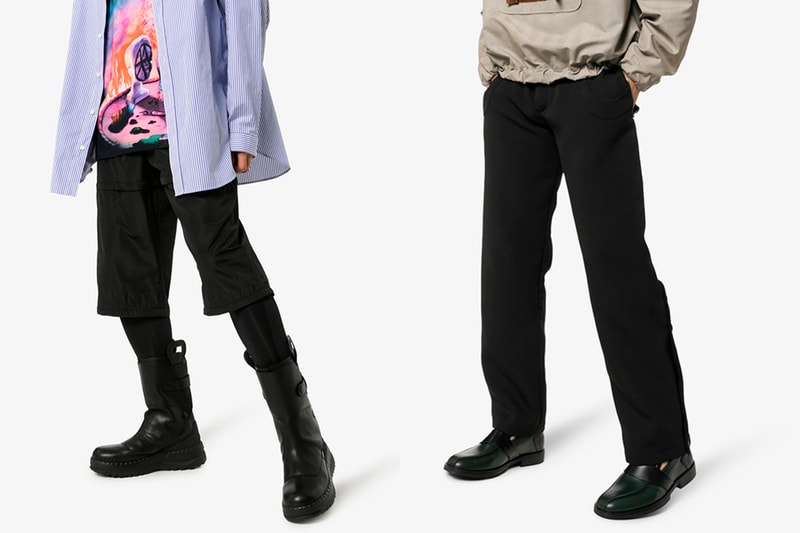 Kiko Kostadinov first showcased his Fall/Winter 2019 footwear collaboration with CamperLab during his LFW:M Runway show. Now, both the loafer and mid-calf boot have dropped, extending the duo’s longstanding partnership.

Alongside his extensive ASICS collection, Kostadinov presented the CamperLab silhouettes in a collection which referenced classic American designs. Two-tone loafers, chunky boots and minimalistic slip-ons were shown alongside the now-released green loafers and biker-themed boots.

The green loafers are made from 100% leather and feature a two-tone design, using black to highlight the almond-shaped toe, heel tab, tongue strap and rubber block-heeled sole unit. The clean design is sophisticated yet streetwear-indebted thanks to their contemporary take on a traditional silhouette. Removable dual-branded EVA insoles have been incorporated for added comfort.

Kostadinov and CamperLab have also released the mid-calf boot. This pair is a fusion of form and function and are also made from 100% leather. Design details include a rear zipper, a smooth yet carved rubber sole unit, a rounded toe, buckles, buttons and a set of pull tabs on the collar that feature contrasting red stitching. Unlike the loafer, the boot features debossed branding on the GORE-TEX-equipped heel.

The Kiko Kostadinov x CamperLab loafer is priced at $260 USD and the mid-calf boot is priced at $379 USD. Take a look at the two new silhouettes in the gallery above, and pick them both up from retailers such as Browns while stocks last.

In other news, Balenciaga has released a new iteration of its Track.2 sneaker.