Before the digital age, there was AM radio and disc jockeys who broke the hits on stations like KHJ.

In director Quentin Tarantino’s new film, Once Upon a Time in Hollywood, not only do the sets, wardrobe, and street transformations create an authentic setting, so does the music. We are treated to Toy Head & the Traits, the Mamas & the Papas, Neil Diamond, Deep Purple, Vanilla Fudge, and Paul Revere and the Raiders, among others. And yet Tarantino takes it a step even further. The film is an homage to Los Angeles in 1969, and features radio station KHJ, also known as Boss Radio, which created a format that changed the sound and content of pop radio in the ’60s. Tarantino and his longtime music supervisor, Mary Ramos, listened through 14 hours of original KHJ airchecks from 1969 to set the perfect tone…and the result is…well, a bit emotional.

On the film’s opening night, I was lucky enough to attend a screening at Tarantino’s own New Beverly Cinema. As the enthusiastic crowd waited for the movie to start, some of those airchecks played on the loud speaker. (For those raised firmly in the era of iPods and music streaming, airchecks are breaks between songs when DJs remind you what station you’re listening to, which songs you’re about to hear, and which ones you’ve already heard.)

Hearing those original Boss Radio jingles and commercials brought tears to my ears. I was a child of the 1970s, and would often fall asleep with a little transistor radio tucked under my pillow playing the Bee Gees and the Jackson 5. AM radio was the only way to hear new music back then, and I’m sure those memories provided the same sentiment for Tarantino. In fact, he even named the production company for the movie Boss Film Productions.

In Once Upon a Time in Hollywood, every character is listening to KHJ, likely because KHJ was the coolest in the land. The soundtrack doesn’t feel like classic rock regurgitation, but instead like we’re listening to these legendary songs for the first time. Hearing the “Real Don Steele” or “Charlie Tuna” introduce each tune makes it feels fresh, even though the airchecks are 50 years old.

KHJ transformed itself into Southern California’s Top 30 powerhouse in 1965. All the kids were listening to it. There was no need to flip the dial for your favorite song because you always kept it on KHJ. You never adjusted the volume, and you never turned it down. KHJ played up and down our neighborhood streets, and if you were too young to cruise a car, then all you needed was a transistor radio. I actually had a one-ear earphone for my Zenith radio that my parents purchased at Adray’s, the family-owned electronics store that closed its doors for good in 1998.

Now let’s discuss the the disc jockeys, who were just popular as their set lists. Humble Harve, the Real Don Steele, Charlie Tuna, Sam Riddle, Johnny Williams, and Robert W Morgan were stars in their own right with catchphrases like, “93 KHJayyyyy!,” “Boss radio!,” “Million-dollar weekend!,” and ”Tina Delgado Is Alive!!!” We never found out who Tina Delgado was but that didn’t keep you from screaming along. Eventually the Real Don Steele ended up with his own show on KHJ TV station, Channel 9.

KHJ also specialized in creatively designed commercials that almost sounded like the songs being played. Record stores such as Wallach’s Music City gave away Boss 30 lists each week and trading those with your friends was a poplar thing to do. And let’s not forget about those crazy contests. Whether they were giving away tickets (by dialing them on a rotary phone!) to the premiere of Help! at Carthy Circle or the Doors at the Hollywood Bowl, KHJ played a significant role in providing musical experiences to their listeners. Once they even gave away four VW Beetles—one for each Beatle. I remember their “Grand-A-Day Giveaways” and $50 dollar gift certificates to Ohrbach’s and Sears. This was also the heyday of hi-fi stereos, and they were always giving those away, provided by Fedco. I remember frantically dialing in to be that right number caller. When a classmate won a big kahuna tiki charm from the Real Don Steele, I was super jealous. 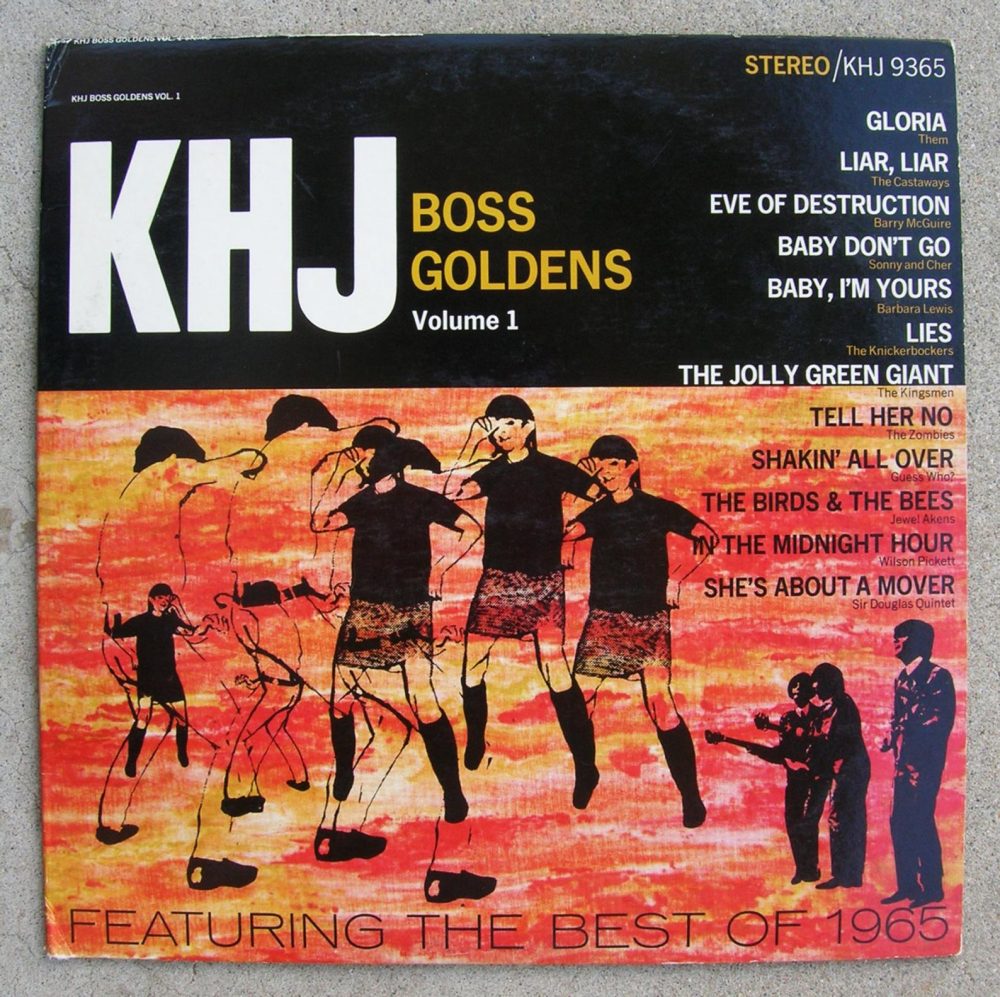 My parents had a KHJ vinyl record of top hits from 1965. It included: “Eve of Destruction” by Barry McQuire, “Baby, I’m Yours” by Barbara Lewis, “The Jolly Green Giant” by the Kingsmen, “She’s About a Mover” by Sir Douglas Quintet, “Baby Don’t Go” by Sonny and Cher, “Tell Her No” by the Zombies, “Gloria” by Them, “Shakin’ All Over” by the Guess Who, and “Midnight Hour” by Wilson Pickett. Thankfully it was passed down to me and I play it often.

I can’t imagine writing a history piece on KHJ without giving some context on the other rival AM stations—especially KRLA or KFWB. When Dave Hull, the Hullabaloo’er, wanted to put down KHJ he would say, “They haven’t even earned their fourth letter yet!” But, it was all in good fun.

Today, music stations are much more segregated by genre. Sirius XM, for example, provides stations that cater to specific musical tastes, and on Pandora you can build your own playlists. None of that’s a bad thing, but when KHJ ruled radio, they played it all, from Motown to psychedelic rock to crooners to country to bubblegum. It was all on the same radio station.

KHJ was the only station I listened to until an older friend told me, “AM is dead. It’s all about FM now.” And that was the end of AM radio for me. But the colossal impact of KHJ can not be overstated. AM radio was everything, and to some it provided the soundtrack of our lives.

Tarantino’s illustrious career has culminated in a stylish, nostalgic journey back to a time and place that in some ways exists only in the director’s mind. But the authentic airchecks help keep it rooted in a shared reality, much like Wolfman Jack did in American Graffiti. I highly suggest buying the soundtrack, which is replete with original KHJ soundbites.

RELATED: In Once Upon a Time in Hollywood Tarantino Recreates the Lost L.A. of His Imagination

The post KHJ, L.A.’s Coolest AM Radio Station, Is Basically a Background Actor in “Once Upon a Time in Hollywood” appeared first on Los Angeles Magazine.