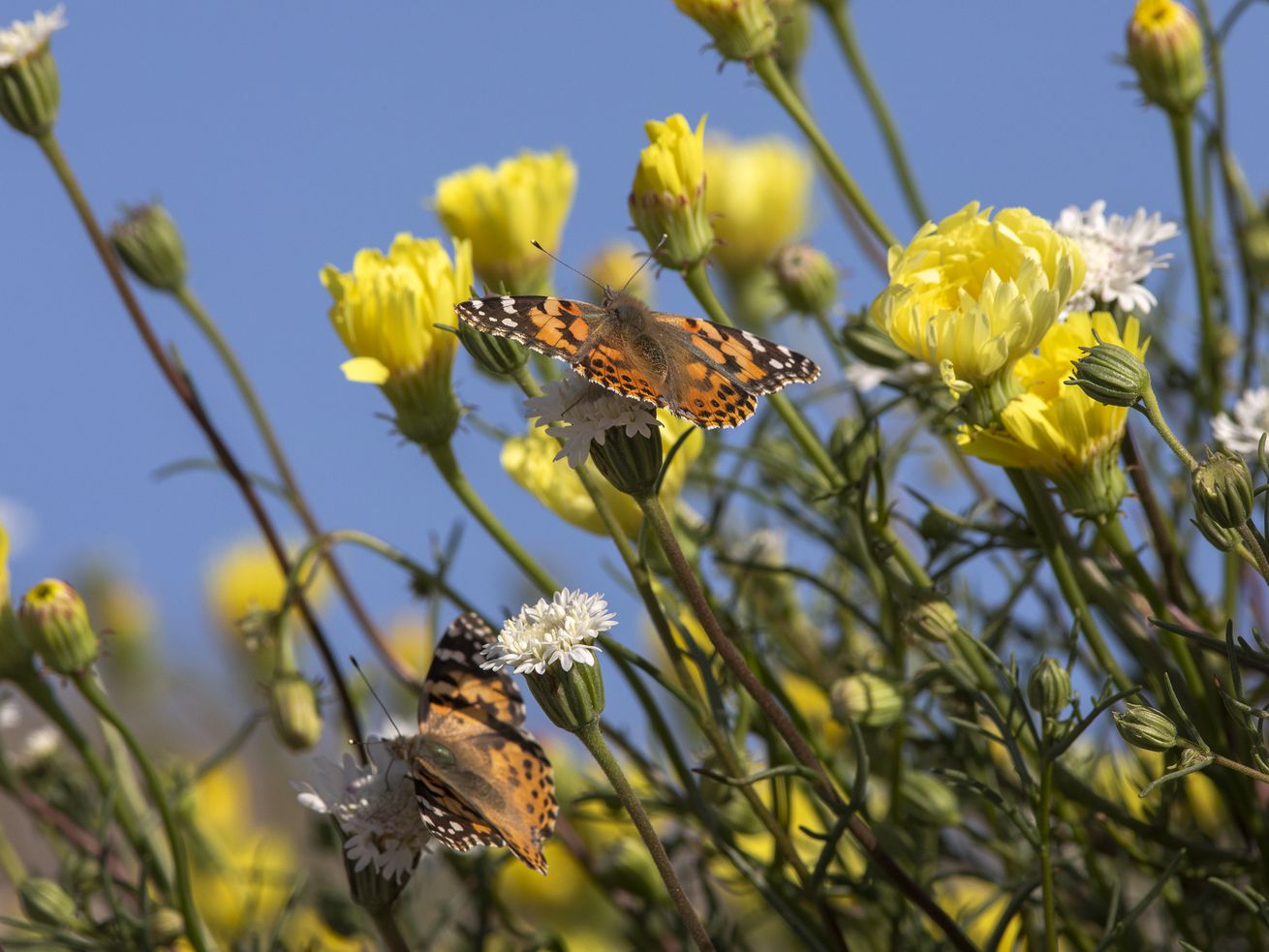 First came the chartreuse hillsides. Then the purple, yellow, and white wildflowers. Now, there are orange and black butterflies.

They’re painted ladies, to be exact. By the millions, the butterflies are fluttering through Southern California, feasting on a proliferation of herbaceous plants like cheeseweed and hollyhock.

It’s part of their normal movement north from the dry deserts of Mexico to the lush Cascade Range in the Pacific Northwest. But the population is outsized this year, the latest colorful natural phenomenon produced by winter’s abundant rainfall and a cooler February that has kept the plants from drying out.

Brown says their movement through Southern California probably started about one week ago. That’s when residents started calling into the museum to report what they were seeing.

The painted ladies have been spotted flickering around Los Angeles, from the Walk of Fame to South Bay beaches, and across Southern California, including in and around Palm Springs.

“We were seeing at least 100 of them a minute,” he says. “That’s just looking out one window. We’re talking about a population in the millions, easily no question.”

In the deserts outside of Southern California, Yanega says there are caterpillars “everywhere.”

“I know people who do field work out there, and they’re saying, ‘Holy crap,’” he says.

Ian Recchio, curator of reptiles and amphibians at the LA Zoo, agrees that he’s seen more painted ladies on recent trips to the Mojave desert than he has in Griffith Park.

“Unfortunately, I’m seeing most of them smash into my window as I’m driving,” he says.

It takes the larvae about one month to reach development, so if the weather doesn’t get too hot or too dry soon, the high volume of butterflies could carry on for another month or even three months, Yanega says. “As long as there’s green vegetation, then we should be seeing them.”

An adult butterfly typically only lives a couple of weeks. Their flight north is typically made up of multiple generations, with a butterfly going a certain distance, then laying eggs. Its brood will hatch and continue north.

That’s similar to the famed migration of monarch butterflies, which are commonly mistaken for painted ladies.

Brown says the movement of painted ladies isn’t as dramatic, but it is far more ubiquitous—painted ladies are found around the globe.

“The migration is not only happening here in North America. It happens between Africa and Europe as well,” he says. “It really is a worldwide phenomenon.”

Southern California friends: I just sat on the beach in the South Bay for two hours while 1,000s of butterflies flew around and past me. What kind are they? What is happening? #butterflies pic.twitter.com/n1IrEaBy0D

With rainfall 5.91 inches above normal in Downtown LA since October, according to the National Weather Service, Recchio says LA should expect to see more insects this spring. “The bottom line is we’re getting a lot of rain that equals more bugs—bugs of all kind,” he says.

And that means more butterflies. Recchio says there are other types of lady butterflies that are more unique to Southern California that will benefit.

“Southern California is a biodiversity hotspot,” he says. “We have amazing butterfly diversity in this part of the world.”

But these painted ladies are native—and that’s something to celebrate, says Yanega.

“It’s one of the few times where we can have an outbreak of something and be guilt free,” he says. “This is cool.”