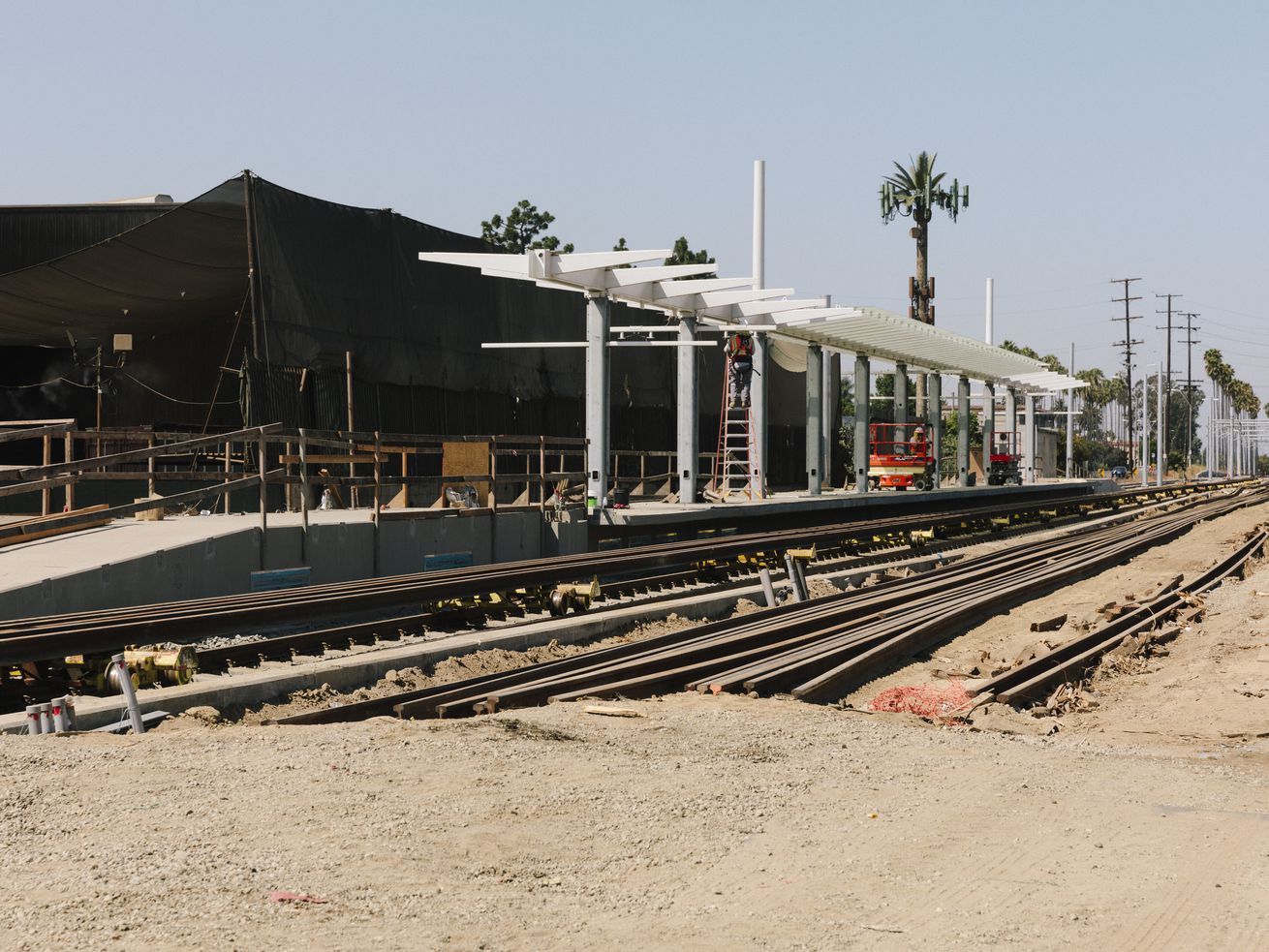 When the line opens, riders will have to end their rail journeys more than one mile from the nearest airport terminal

For more than three decades, Los Angeles officials have pursued a rail connection to the city’s largest airport. Starting next year, a new train line will come close—but will pull up short of it.

Eventually, that gap will be closed by a people mover at LAX, set to break ground this week. It will link up with Metro’s under-construction Crenshaw/LAX light rail line—which, in spite of its name—won’t actually go to the airport.

Once on the people mover, riders will be able to bypass long lines of taxis and bus shuttles aboard sleek, automated shuttle pods.

But the Crenshaw/LAX train, which will run for 8.5 miles through South Los Angeles, from the Expo Line’s Crenshaw Station to the South Bay, will finish three years before the people mover opens. Passengers on the new Metro line will initially have to end their rail journeys more than one mile from the nearest terminal.

That’s bound to be a familiar feeling for anyone who’s used the Green Line to access the airport. For 24 years, the rail route has brought riders to within two miles of LAX before cutting south for Redondo Beach and forcing airport-bound passengers to travel the rest of the way via bus shuttle.

In 1980 and again in 1990, 2008, and 2016, Los Angeles County voters approved sales tax increases to fund a wide range of transportation initiatives, including many ambitious rail projects. Each time, transit planners promised that train service to LAX, in one form or another, would be a key part of the spending plan.

But time and again, budget limitations and shifting priorities delayed delivery of those promises.

In the 1980s, plans for what’s now the Green Line, called for a northern extension of the 20-mile rail route that would access LAX en route to the San Fernando Valley (later, local officials even envisioned a rail connection from the airport all the way to Palmdale).

The Green Line’s cost soon swelled far beyond initial estimates, due in part to disagreements over what type of train cars to buy for the line. Former Los Angeles mayor Tom Bradley envisioned a fully automated line with driverless cars, and transportation officials spent more than $60 million developing the technology before punting on the idea.

In an attempt to “buy American,” the county’s transportation commission also broke off a contract with a Japanese manufacturer to provide train cars for the route. Eventually, the commission settled on a less cost-efficient contract with the same company.

But costs weren’t the only thing that eventually derailed a Green Line extension to the airport. Federal Aviation Administration officials warned that the train’s elevated track and electronics could interfere with operations at the airport and suggested that a train should be built underground instead.

Short on funds and concerned about safety, transit planners eventually shifted focus to other projects, as LAX officials unveiled early plans for the people mover system.

Two decades later, Metro’s Board of Directors faced similar challenges when evaluating construction plans for the Crenshaw/LAX Line. Early in the planning process for the train line, local officials had latched onto the idea that the train would connect to the LAX people mover at Aviation Boulevard.

Still, at the urging of County Supervisor Don Knabe and others, Metro continued to study options to connect the rail line directly to the airport even after the project had broken ground.

Agency decision makers ultimately decided against a direct connection as challenges to the project’s viability mounted.

Metro staff estimated that a stop at LAX itself, which would have to be constructed below ground, would add $2 billion or more to the project’s total cost. Then-CEO Art Leahy also pointed out that getting the Transportation Security Administration to sign off on a tunneling project below the airport could be challenging in a post-9/11 security climate.

Beyond cost, linking trains to the people mover (which will be built by LAX operator Los Angeles World Airports, not Metro) does offer some advantages over a direct airport connection.

For one thing, the future station linking the Crenshaw/LAX Line to the airport’s shuttle system, can be shared by future train lines—like a planned rail route through the Sepulveda Pass.

The people mover will also stop at each terminal, allowing baggage-laden passengers to easily reach their gates without walking long distances through the airport. Building a subway with stops at each of the airport’s nine terminals would be a challenge—as well as an inconvenience for riders traveling elsewhere.

The people mover connection will likely feel familiar to travelers used to traveling in and out of New York City. A shuttle system at JFK links passengers to the city’s subway network, and plans are now in the works for a similar setup at LaGuardia Airport.