Paul Gonzales, who police say tricked at least 20 women into buying him expensive meals by asking them out via dating sites and then running out on the bill, is reportedly looking for love—or at least something to eat—once again.

Earlier this year, Gonzales served 120 days in jail for the scam, but one of his victims says she believes the voracious Lothario has returned to the world of internet matchmaking. Gaily Hanna, a 53-year-old hairdresser in Los Angeles who had an unfortunate dinner date with Gonzales in 2017, says that late last month she spotted a profile on OKCupid.com with photos of Gonzales. 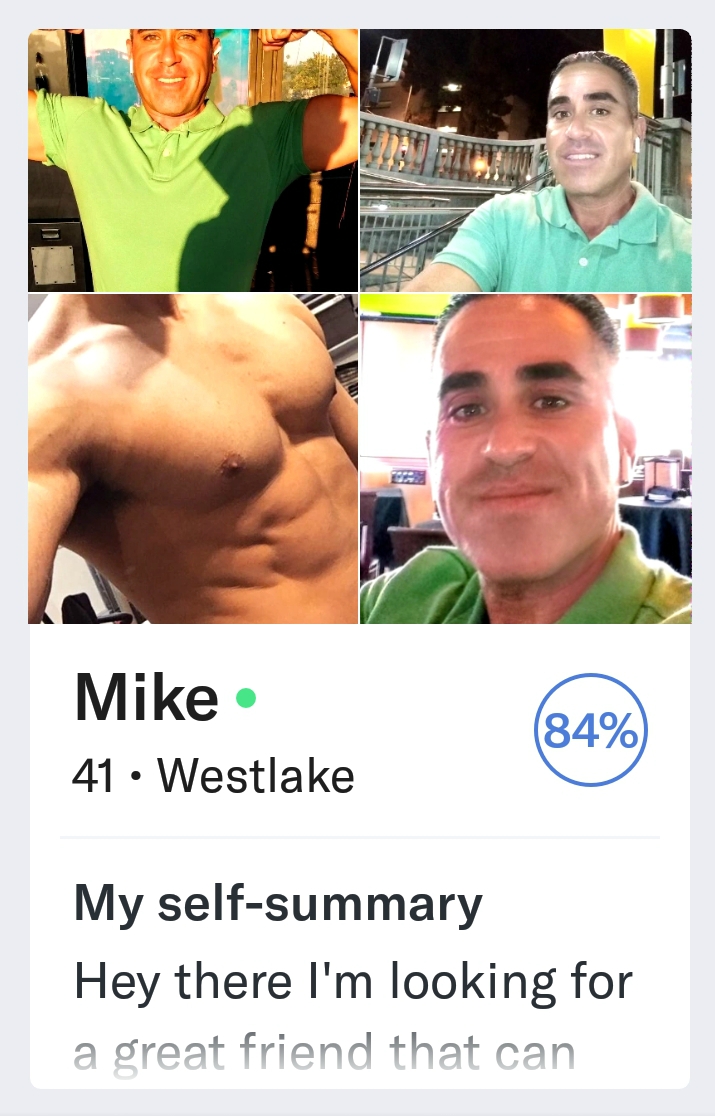 The profile appears to show Gonzales, 45, going by the name “Mike” and claiming to be a 41-year-old in Westwood seeking a “long-term” relationship. Hanna contacted the user, telling him he has “nice eyes” in the hopes that he would confirm his identity, but she says the profile disappeared soon after.

Although Hanna filed a report with police over the phone after Gonzales ran out on her mid-date, the media didn’t get on the story until months later, and the Pasadena detective who broke the case never contacted her. Hanna’s account of the disaster date, however, fits the Dasher’s now infamous M.O.

After chatting briefly on PlentyOfFish.com, Hanna says she agreed to an impromptu dinner at BJ’s Restaurant & Brewhouse in Pasadena, where Gonzales was already working on appetizers when Hanna arrived.

“When he stood up he was much shorter then I had expected, and I wanted to leave,” Hanna says. “But I felt like I was being way too shallow. The waiter continued to bring him food, and he explained to me that since he is a fitness trainer, he eats an exorbitant amount, and people are usually surprised by it. I was surprised that he was eating cheesy shrimp and stuff that people into fitness normally don’t. He told me to go ahead and order whatever I wanted.”

Hanna says she only ordered a lettuce wrap so as not to take advantage of her date’s generosity, while Gonzales proceeded to polish off an entrée, a salad, and coffee.

Then, “He started texting and looking at me strangely. He said he was waiting to hear about his sick aunt or something. He then excused himself to use the restroom. Five minutes went by, then ten, when I finally decided to ask the waiter if he had seen the little joker.”

Of course, he was gone. Hanna says she tried to text him, but Gonzales had already blocked her number. The restaurant didn’t stick her with Gonzales’s part of the bill, but Hanna says she’s still embarrassed by the event, especially since she once wrote a guide to internet dating.

“I didn’t follow any of my own rules, and was being spontaneous, as I thought it was cool somebody was asking me to dinner,” she says. “I can guarantee you he’s doing the same thing now.”

According to NBC 4 News, Gonzales was barred from dating sites PlentyOfFish and Bumble.

The post Is the Dine-and-Dash Dater Looking for Love (and Free Food) Again? appeared first on Los Angeles Magazine.