There is no greater host in all of the Hollywood industrial complex than Michael Chow, aka Mr. Chow of the legendary luxe Chinese restaurants where the glitterati have gathered since he opened the first location’s doors in London in 1968 (the Beverly Hills location followed in 1974).

For his restaurant empire’s 50th anniversary a year ago, he hosted a party at his gigunda 60,000-square-foot, two-story Vernon art studio, replete with guests as eclectic (and famous) as Anjelica Huston, Jerry Hall, and Quincy Jones; a performance by Billy Idol (boyfriend of daughter China Chow); a live Chinese New Year celebration with dragon dancers, and more gorgeous food, champagne, and pure glitz than the Vanity Fair Oscars party could ever dream of. The crowd was chockablock with socialites, artists, art dealers, fashionistas, L.A. glam stalwarts, etc. Just movie stars? Michael Chow can top that.

On Saturday, February 9, he managed to repeat with another fabulous fête. The talented, almost-80-year-old Mr. Chow married Vanessa Rano, his girlfriend of two years, in a ceremony at the First Congregational Church of Los Angeles. Chow divorced his third wife, Eva, in 2017 after 25 years of marriage, and met social work graduate student Vanessa (age 30), the story goes, in an elevator. Just to recap, Michael Chow’s first wife was then-supermodel Grace Coddington, who became the legendary Vogue editor and stylist; his second was famed fashionista/model/jewelry designer Tina Chow, who tragically died of AIDS at the age of 41.

For the wedding and subsequent reception in Vernon, the dress code was “timeless.” Of course, L.A. has its own interpretation of that. Designer Susan Becker made her own red and black sequin kimono coat (some sold at Just One Eye in Hollywood), which was nearly the victim of a big champagne spill in the all-white first level of Chow’s sparkling spare studio, filled with his own large splatter paintings—some made just for the wedding and the bride’s 30th birthday. “If Michael sees that,” Becker noted, “he’ll have a heart attack.” Looks that dotted the room: the New Museum’s Abby Pucker in a Comme Des Garçons black and white polka dot leather motorcycle jacket over a white-and-black CDG gown; full-on evening gowns in red and gold; kimonos, mini skirts with boots, a helluva lot of sequins; Bai Ling in a silver foil micro-mini—and top Hollywood lawyer Bert Fields appearing in priest’s robes, while his art dealer wife Barbara Guggenheim donned a sharp white pantsuit. 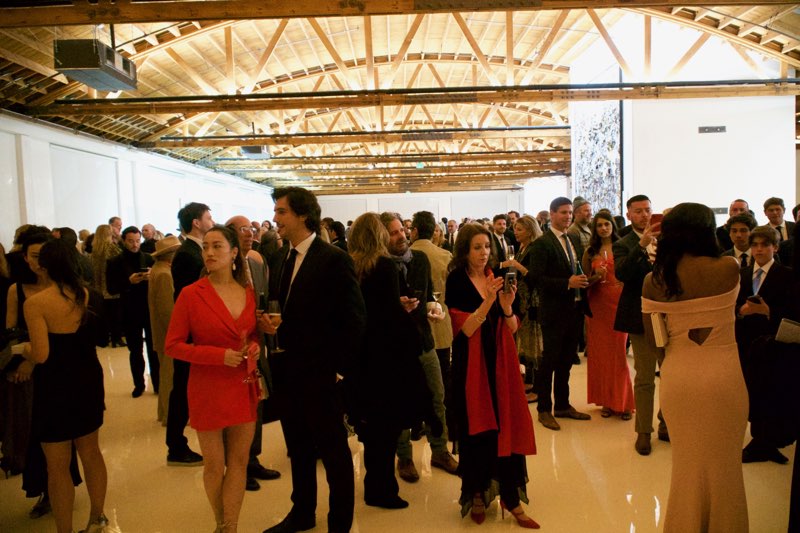 Mr. Chow himself wore traditional showman tails and his timeless round black specs, while the bride wore a lace gown with a skirt so poofed that the svelte Rano was almost dwarfed by it.

The reception kicked off what could be referred to as L.A.’s Art Week, with Frieze L.A. commencing on Friday. And a lot of art world denizens were on hand to celebrate: art collector Beth Rudin DeWoody and her photographer husband Firooz Zahedi, collector Nicolas Berggruen with producer Noor Alfallah, art dealers Eric Shiner (who staged an exhibit of Michael Chow’s work at the Andy Warhol Museum), Bret Gorvy, Patrick Painter, Harmonia Rosales, Gina Edensvard, artist Chris Anderson, antiques dealer Jao Fai Chen, Roca Partner’s Ravi Sarin, Harmonia Rosales with lawyer Michael Eisner, Terezia Revesova, and Ed Begley Jr. Let us not forget that Michael Chow forged inroads into the New York and L.A. art worlds early on—by feeding artists for free in their penniless days—and his own pricey art collection includes Basquiats, Warhols, and works by Alex Israel and Kenny Scharf, both of whom were at the wedding reception.

Upstairs in the gallery, an all-girl classical quartet shrouded all in white created some ethereal moodiness, until a bell rang for guests to descend down some winding stairs all draped in white flowers created by Jeff Leatham, who designed the lobby of the Four Seasons in L.A. and the Four Seasons George V in Paris. Swiss artist Urs Fischer’s life-size wax sculpture of Chow, lit candles protruding from the top of its head, was the site of many selfies. 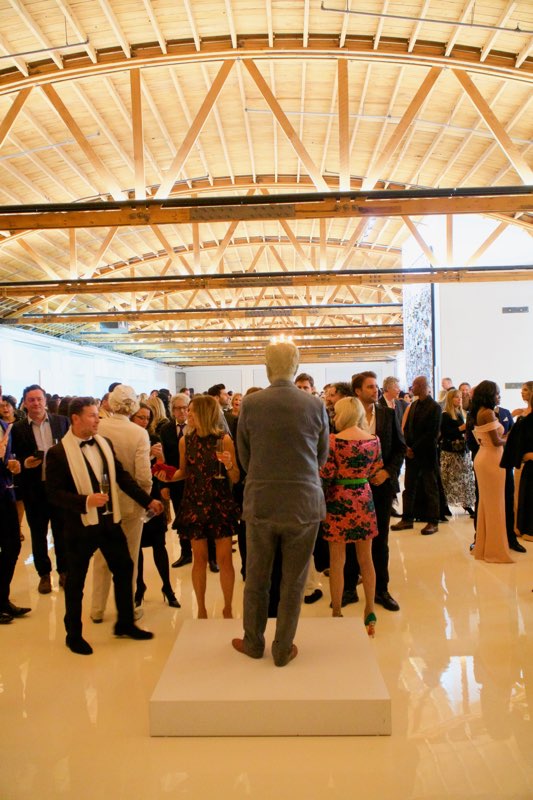 The enormous bottom floor was crowned by a ceiling obscured by thousands of star-shaped silver mylar balloons. The minute the crowd finished licking their lips over the candied walnut prawns, sea bass, garlic noodles, Beijing chicken, and the like, Michael Chow took to the dance floor all by himself, to show off some pretty smooth moves. A very large video screen above a stage announced that this was the wedding of “V + M”. 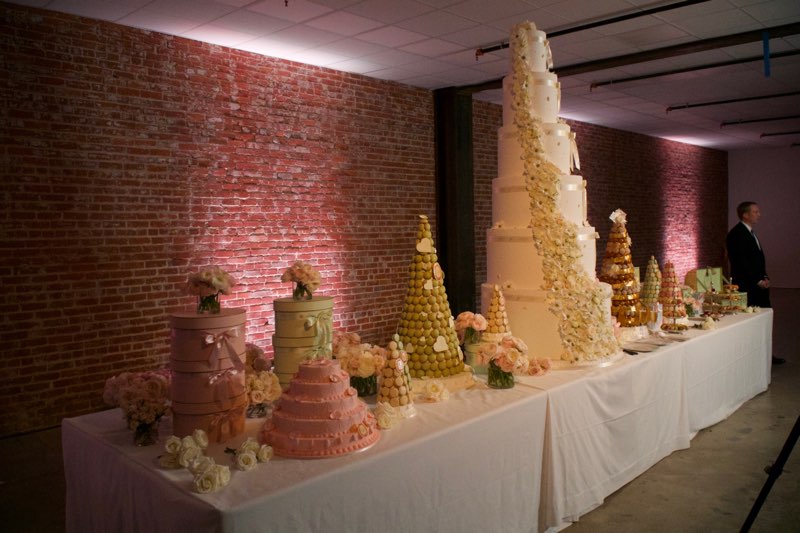 Outside of amazing people watching, you just didn’t know where to put your eyes. In a peripheral room, hidden behind columns, a spread of mega cakes by Laduree bakery was laid out across several tables. There were macaron trees of every flavor (mocha, matcha tea, pistachio, rose), and of course a giant white wedding cake with more levels than the loft that the bride and groom sliced for photos (it looked like a red velvet interior) but then was never consumed. Perhaps it just took too much work to cut the cake. The crowd settled for daintier delights all the same.

In another room, guest could commemorate their attendance in a video booth, for which guests could pose with boxing gloves, fake money, confetti, and top hats and act out little fantasies, recorded in dreamy slo-mo, to be emailed to them the next day.

After the DJ wrapped up (playing a lot of Motown and R&B hits), two professional tango dancers hit the floor, followed by a traditional Chinese Lion Dance snaking suddenly through the room, accompanied by gongs and bells, with small dancers lining up under the giant costumes. And if that wasn’t enough feast for the senses, a video of Saturday’s daytime service played after dinner, then got eclipsed by a performance by Wyclef Jean. Sure, nobody dances in L.A.—except at a Mr. Chow party. And they say nobody eats in L.A. either—except when confronted with a giant buffet of Mr. Chow delights.

And Mr. Chow? Well, he was born this way. Turns out, his father was a grandmaster of the Beijing Opera, and now he’s a ringmaster himself—of restaurants, art, entertaining and, let’s not forget, real estate. His former mansion, resided in with wife Eva, is on the market for a cool 78 mil. Perhaps just a tad more than he paid for this, his fourth wedding.

Well, fourth time’s the charm, as they say. Or they do now.

RELATED: 3 New Restaurants You Have to Try This February