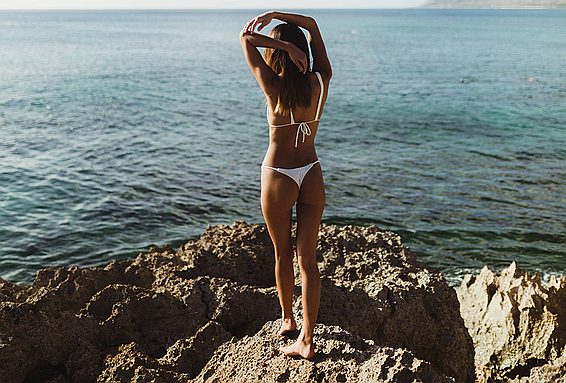 In one fell swoop, liposuction removes stubborn,
hard-to-lose fat—on the chin, neck, arms, thighs,
abdomen, buttocks, and even calves and ankles—
through a vacuum apparatus. “In an ideal world,
liposuction is best for problem areas that are out
of proportion with the rest of the body, such as isolated
saddlebags or a little pooch in the lower abdomen,” says
Nashville plastic surgeon Mary Gingrass, MD. “It’s a
body-sculpting procedure, not a weight-loss procedure.”

Today, in addition to traditional liposuction, the
procedure can also be done using different energy-emitting technologies like ultrasound, radio frequency and lasers, which work to enhance the clinical outcome
over traditional liposuction. Despite the use of other
modalities, the procedure is still surgical, or at times
minimally invasive, and can require general, deep,
monitored sedation or local (tumescent) anesthesia.

You May Also Like: Can This Quick Injection Mimic Liposuction?

Las Vegas plastic surgeon Julio Garcia, MD notes that
no matter which type of liposuction is performed, the
training and experience of the doctor performing the
procedure will affect the outcome. “Ask to see before-and-after cases, the surgeon’s board certification and the
accreditation of the surgical facility. Do the homework
ahead of time and you’ll get the best results.”

There’s More Than One Type of Lipo

There are so many brand
names for different types
of liposuction, which can be
confusing, but Barcelona, Spain
plastic surgeon Dr. Ahmad Saad
says to think of liposuction
modalities as different “families”
under which the various brand
names fall. “The first family is
traditional, suction-assisted
liposuction. The second family is
ultrasound, which separates the
fat from the collagen matrix in
the tissues. Then there are lasers
and radio frequency, which are
also thermal and heat the fat.
And lastly, there is power-assisted
liposuction, which involves
the cannula moving with
reciprocation (or rotating).”
According to Dr. Gingrass,
a surgeon can employ more
than one type of liposuction
during the same procedure:
“You really shouldn’t shop for
the modality of liposuction; you
should shop for a thoughtful,
experienced surgeon, and then
let them decide what technique
or device they would use in order
to get the best surgical result.
I will frequently use various
types of liposuction for different
areas on the same person.”

This 27-year-old patient wanted a better contour for her thighs.
Atlanta plastic surgeon Carmen M. Kavali, MD sculpted the legs
using liposuction to give the thighs a slimmer shape.

The traditional version is best for
those with localized fat deposits
and good skin tone.

How It Works: Hollow metal
tubes called cannulas are used to
remove fat from areas of the body.

Benefits: It’s most effective in
areas where the tissue is less
fibrous. This tried-and-true
form of liposuction has years
of research backing its safety
and effectiveness.

Limitations: Maintaining realistic
expectations is crucial. Some
surgeons feel that traditional
liposuction does not work well
in secondary cases.

This method is useful in primary
and repeat procedures for
treating larger areas of fat, or in
combination with other surgical
body-contouring procedures.

How It Works: Ultrasound
liposuction is a two-step process.
High-frequency energy from
ultrasound waves liquefy fat
so that it can be suctioned out.

Benefits: It works well on
fibrous, fatty areas like the
back, hips and stomach.

Limitations: Some patients report
that their skin is left feeling
numb during recovery. If too
much ultrasound is used, there is
a greater chance of postoperative
seromas, which may require
aspiration of the fluid.

While laser
liposuction has been marketed
as a better technique, accurate
scientific studies fail to show a
clear benefit from laser energy
used to heat tissues.

How It Works: Fiber-optic lasers
heat up tissues to break down fat.

Benefits: Purportedly less
swelling and bruising than
other techniques, but this is not
supported by scientific data.

This option (BodyTite and
FaceTite) is fairly new and
claims to tighten and tone.

How It Works: Performed under local anesthesia, a
small incision is made in the
area to be treated and a radio
frequency–transmitting electrode
is inserted. Radio-frequency
waves are guided through the
fatty tissue to liquefy the fat,
which is immediately suctioned
from the body with a cannula.

Benefits: It purportedly tightens
loose skin by stimulating the
production of collagen.

This option makes use of special
equipment to give the cannula the
power necessary to dislodge fat.

How It Works: A power-assisted
liposuction (PAL) cannula moves
back and forth to suction out fat.
This technique is also the most
similar to traditional lipo.

Benefits: Less force is needed, so
some doctors claim that tissues
aren’t damaged as much, but
there is no data supporting this.

Limitations: There are limitations
to all liposuction procedures, so
realistic expectations are key.

Before and During
A small incision will be made at
or near the designated area(s). A
solution of saline and anesthetics
or epinephrine, called tumescent
fluid, is first injected to break up
the fat cells and allow them to be
easily removed with a cannula.
The fat is then suctioned out and
the area(s) is stitched up.

The First Few Days
The skin will be bruised and swollen
for the first few days, but expect to
be up and walking right away. Good
circulation is essential to prevent
blood clots. Compression garments
and foam pads are used to diminish
swelling and bruising.

The First Few Weeks
A noticeable difference can be seen
and there should be no bruising.

The First Few Months
The final results will be visible and
may continue to improve over the
next six months.

Procedure Time
It will vary based on the areas
being treated.

Recovery Time
Three to 21 days, depending on
the treatment and area treated;
plan to avoid strenuous activity
for three weeks.

Is the Fat Really Gone Forever?

A consultation is key to learning more about the benefits and limitations of
liposuction, but asking the experts a few burning questions doesn’t hurt.

Do I have too much fat
for liposuction?
“The ideal candidate is
within 20 percent of his
or her ideal weight and
has good skin tone and
limited amounts of fat,”
advises Dr. Saad. “Those
with lax skin or stretch
marks may not respond
well because their skin
may not recoil when the
fat is removed.” Eugene,
OR plastic surgeon Mark
Jewell, MD cautions:
“Patients with large bellies,
where there is limited
fat under the skin and
large amounts of fat inside
the abdomen, cannot
achieve a good outcome
through liposuction.”

Can I lipo more than one
body part at a time?
“It’s actually uncommon
to suction just one area at
a time,” says Dr. Gingrass.
“If a patient would benefit
from liposuction of several
areas, we would typically
do them all in the same
operation.” In some cases it
may be prudent to perform
larger combinations of
procedures in stages in
order to maximize results.

Will my fat return
after liposuction?
“We remove the majority
of the fat cells,” says
Dr. Garcia, “but we don’t
remove all of the fat
because we want to leave a nice, smooth layer there.
So, if the patient gains
weight, the fat cells that
were left can grow in size.”

Unable to achieve a flat tummy with diet and exercise alone, this
27-year-old patient sought Newton Centre, MA plastic surgeon
Joseph A. Russo, MD for liposuction and a Thermi250 treatment.

Is there a limit to how
much fat you can take?
“There isn’t an exact limit,”
says Dr. Gingrass, “but the
American Society of Plastic
Surgeons advises that risks
significantly increase when
more than 11 pounds are
removed in one sitting. But,
every situation is different.
In cases where more fat is
removed or combined with
other surgical procedures,
it may be best that the
patient is observed
overnight in a proper
postoperative facility.”

Doctor, Is This Normal?

These six side effects typically accompany a liposuction
procedure. Here’s what to expect:

Sacrs Because liposuction incisions are
so small, they are rarely visible to someone
other than the patient.

Swelling and Bruising The lower
extremities are more susceptible to fluid
retention. Swelling decreases rapidly; however,
bruising may persist for up to three weeks.

Hyperpigmentation Occasionally,
there may be some darkness in the skin where
lipo has been performed. “This is caused by
hemosiderin, a pigment produced when red
blood cells break down,” says Dr. Jewell.
“This may take a few months to go away.

Hypersensitivity Expect to feel slight
discomfort. Any severe pain is reason to
immediately call your doctor.

Uneven Appearance Contour irregularities
can occur as remaining fat settles. Massage,
topical creams and external ultrasound may
help. “I have my patients undergo a lymphatic drainage massage after one week, then at 10
days, and again after that,” advises Dr. Saad.

Numbness This temporary side effect is
normal and results from disturbing the small
nerve fibers below the skin. Only in very
rare instances is numbness permanent.

This 37-year-old patient wanted a BBL alternative. Los Angeles plastic
surgeon Peter Lee, MD injected 10 vials of Sculptra Aesthetic into each
buttock during her first visit, and five vials per side at her second visit.

More than likely, the popularity
of the peach emoji shape is thanks
to the Brazilian Butt Lift (BBL).
Utilizing harvested fat taken from
the body during liposuction, fat
transfer is performed and placed
back into the derrière to create
a rounder, fuller shape. “It has
been a key part of my Mommy Makeover procedure for more than
a decade,” says Shreveport, LA
plastic surgeon Simeon Wall Jr,
MD. “I take the SAFELipo fat,
and using Expansion Vibration
Lipofilling (EVL), place it into the
part of the buttock that gives it
a rounder, fuller, more athletic
appearance. Most of my patients
want the smallest waist possible
with a higher, tighter buttock
and a proportional silhouette.”

While the BBL remains one of
the most popular procedures, it
also comes with risks. If performed
incorrectly, injecting fat into the
buttock can lead to vital problems,
including a fat embolism. If fat
enters the bloodstream, it can
block the lungs, leading to death.

La Jolla, CA plastic surgeon
Robert Singer, MD says more
patients are becoming aware of
the risks: “While extensive research
into making the procedure safer
is being carried out, patients
should be aware of potential complications—not only the
benefits—before undergoing
this, as well as any procedure.”
As a result, doctors are utilizing
BBL alternatives like thread lifts;
radio-frequency treatments;
Emsculpt muscle toning, and
Sculptra Aesthetic injections
(thread lifts and Sculptra Aesthetic
have not been FDA-approved for
this use) to temporarily plump the
butt. Dr. Jewell stresses that these
new modalities have not yet been
proven: “The clinical outcomes
have never been studied with
regards to long-term aesthetics,
safety or patient satisfaction.”