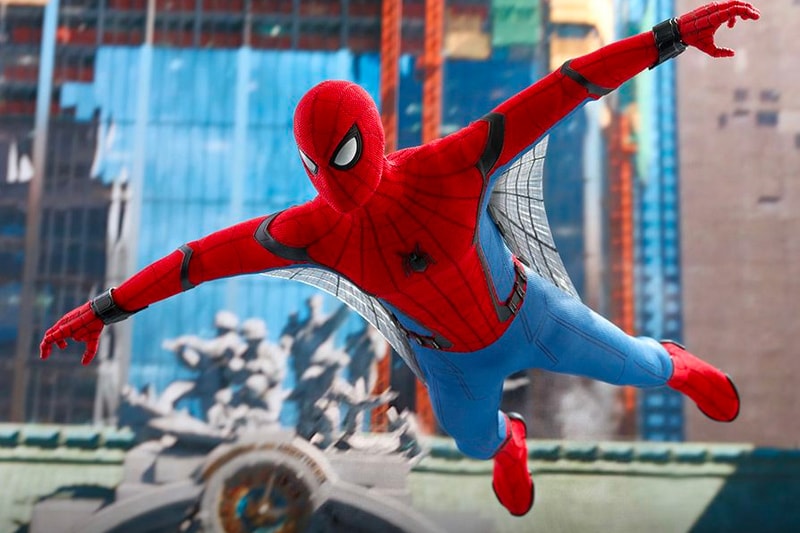 With Spider-Man: Far From Home‘s release just around the corner, Hot Toys has once again teamed up with Marvel, this time for a special Movie Promo Edition of the friendly neighborhood  Spider-Man.

Featuring the last suit Tony Stark aka Iron Man created for his fellow Avenger, the movie-accurate 1/6th scale figure stands 28.5 cm tall, and boasts a whopping 30 points of articulation. Coupled with a redesigned highly stretchy Spider-suit, Peter Parker can be positioned in any acrobatic stance you want. The suit comes with magnetic web-wings, extra web-shooters, and various spider web strings, with four sets of interchangeable eye visors for different expressions. The usual variations of fists and open hands will also be available. The whole package comes with a dynamic movie-themed figure display stand.

The Hot Toys Spider-Man: Far From Home Movie Promo Edition Spider-Man 1/6th scale figure is expected to release in the latter half of 2019, and will have a price tag of $1,280 HKD, or roughly $165 USD.

And for more Spider-Man: Far From Home news, check out some new footage in the Chinese version of its trailer.

【Spider-Man: Far From Home 1/6th scale Spider-Man Collectible Figure (Movie Promo Edition) 】 ‘So nice to finally meet you, Spider-Man.’ – Nick Fury. Spider-Man: Far From Home is hitting theatres in less than a month. In this upcoming sequel of Spider-Man, Peter is going to take a break from school, from crime fighting, from being “Spider-Man”! He will be travelling with his friends across Europe, yet their tour is interrupted by a series of threatening events. Our beloved neighborhood Spidey must step up to take on new threats in a world that has changed forever. Capturing the web-slinging adventures of everyone’s favorite wall-crawler, Hot Toys is excited to present the 1/6th scale Spider-Man Collectible Figure (Movie Promo Edition) inspired by the upcoming blockbuster as a special release! The movie-accurate collectible figure is specially crafted based on the appearance of Spider-Man in the movie. It features a finely developed masked head sculpt with four pairs of interchangeable eye pieces to create numerous Spider-Man’s expressions, expertly tailored Spider-Man battle outfit suit with fine details, a pair of magnetically attachable web-wings, a variety of spider-web shooting effect parts, and a dynamic figure stand. Hot Toys fans shouldn’t pass up the chance to pick up this one-of-a-kind Spider-Man figure that is available exclusively in selected markets! #Marvel #SixthScale #Spider-man