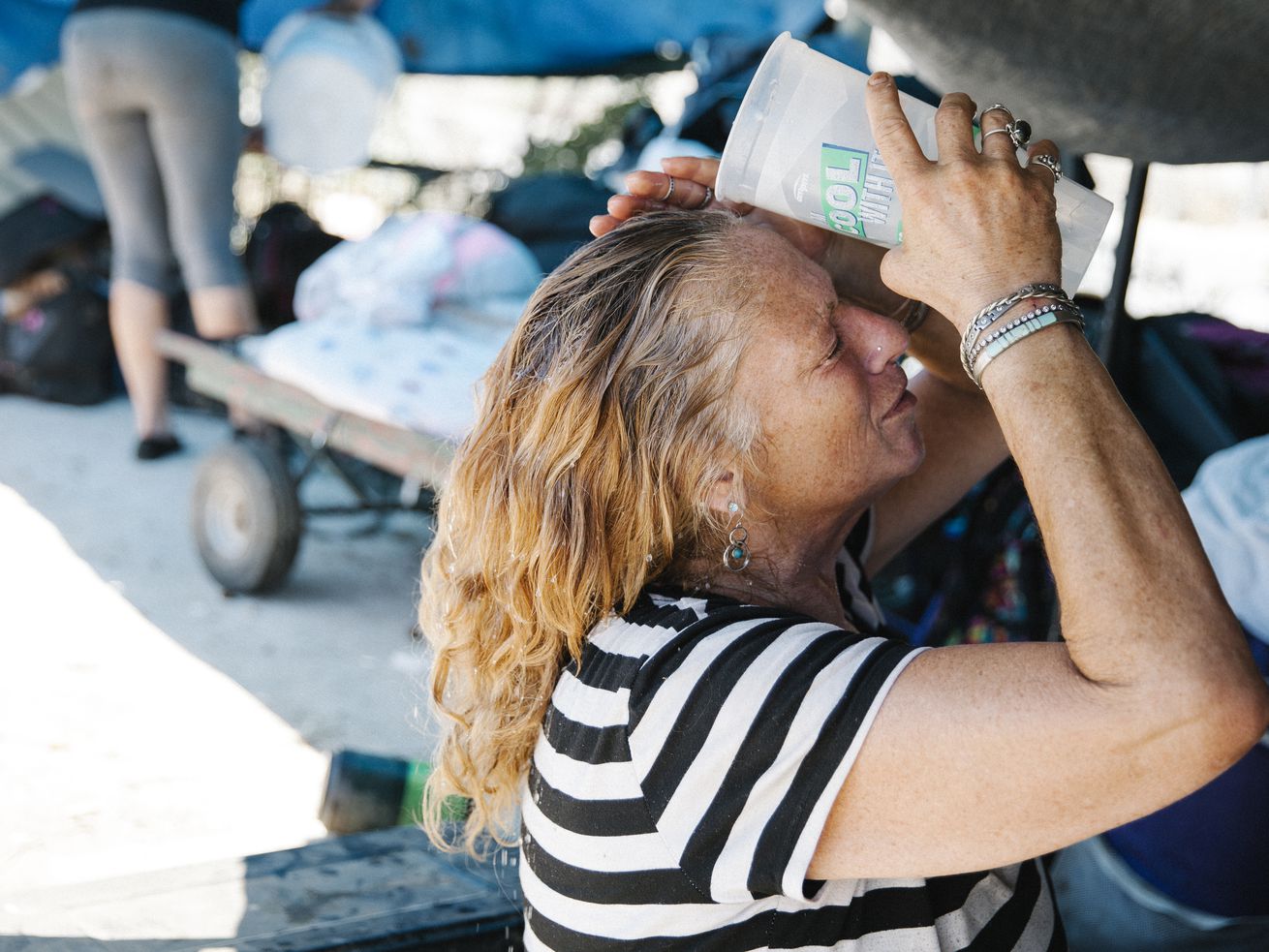 To cool off, Kimberly Wetter trickles water over her head.

“I consider myself a strong woman. I can survive this, but I don’t want to anymore. It’s hard being homeless”

It’s 1:30 p.m., and the temperature is 96 degrees. Kimberly Wetter, 57, grabs a cup of water and pours it over her head, a cooling-off ritual she repeats four to five times daily. Wetter lives in an encampment along the train tracks, and shade is scarce.

It’s one of the hottest days of the summer so far this year in Chatsworth, a neighborhood on the west side of the San Fernando Valley, a region where 8,047 people are homeless. Only a few scattered clouds dot the sky, and they quickly dissipate. The temperature will climb as the afternoon wears on.

Wetter lives with her boyfriend of six years and her daughter, who is pregnant. Their encampment lies between Metrolink train tracks and a wash with a makeshift bridge. They’ve set up camp at this particular site for a few months, but Wetter has lived in the Valley for about two decades.

The only shade in the area comes from a few palm trees that don’t provide much shade at all. Across the way, people trickle into an air-conditioned movie theater and fitness studio. But Wetter doesn’t have the advantage of A/C.

To stay cool, she drinks as much water as possible and tries to stay idle in the shade. That mostly means sitting under a black tarp with the sides lifted, hoping to catch the breeze. But it often feels more like a sauna than a reprieve.

With so much sun exposure, Wetter, and her daughter and boyfriend, say they have experienced symptoms of dehydration and heat exhaustion.

Wetter recalls trying to run errands in a heat wave last summer, on a day when the mercury climbed to 117 degrees. She got on her bike, rode to the store, loaded up her cargo trailer, and attempted to ride back. “It was so hot. I thought I was going to die,” she says. “I had to stop two times. It was hard to breathe. And then you feel cold, but you’re hot and tired.” When she finally made it back, she poured water over her head and tried to rest. “That’s all you can do. Just relax. Try to stay cool.”

From 2016 to 2018, seven homeless residents in Los Angeles County, aged 42 to 67, died because of hyperthermia or heat stroke. Four of those deaths occurred last year; they all occurred in the summer, according to county coroner data.

In the summer, dehydration is the most common condition that Carrie Kowalski treats. She’s a physician’s assistant who serves on a street medicine team with Venice Family Clinic.

“Heat can be a real issue for our patients because they often times don’t have reliable access to water or shade,” Kowalski says. “Even something like 80 degrees, if you’re in the direct sun, could be a problem.”

Wetter says she’s dehydrated all the time. “My heart palpitates, and when you stand up you get really lightheaded. The way your body begs you to drink water. The way your skin feels. My skin is all messed up now,” she says, as she pinches her skin, full of sunspots.

“People can be more easily agitated and irritated when they’re hot,” says Nilli Jacob, a mental health specialist who works with LA Family Housing. “The heat is not going away, because they don’t necessarily have a cool place to go. It can make things seem more hopeless for them.”

It’s not easy to find relief.

The nearest public library is a 12-minute bike ride away. The Winnetka Recreation Center is closer at seven minutes, but it’s closed during the day for summer programming. Wetter often rides her bike eight minutes to the nearby McDonald’s to cool off—until she’s kicked out.

Most stores are a seven- to 16-minute bike ride away; that’s enough time to cause adverse symptoms on a hot day for someone who’s dehydrated, says Kowalski.

Sometimes at night, Wetter and her daughter go on rides to cool off. “It’s so nice at night. It’s cool, and there’s no cars. It’s peaceful,” she says. But it’s usually a brief respite. The area, surrounded by large industrial and commercial buildings, is desolate in the dark. “You can’t be by yourself if you’re a woman out here,” she says. “It’s just too dangerous.”

Plus, it’s risky to leave possessions behind at camp; they can be stolen or swept up in city-lead cleanups.

The sheriff’s department has jurisdiction over the train-track side. Wetter and her campmates say deputies come every couple of months to kick them out. On the side across the wash, they say LAPD officers show up at least once a week.

“When the LAPD messes with us, we go to the tracks. Then when the sheriffs mess with us, we’ve got to come back,” Wetter says. “They give you 15 minutes to grab your stuff and walk over the bridge. If we don’t move we’ll be arrested, charged with trespassing, and things will be destroyed and our dogs will go to the pound.”

This cat-and-mouse game is not only frustrating, it’s potentially dangerous given the physical exertion of moving things back and forth in the heat.

“[Physical] activity will lead to increased sweating, which will further the risk for dehydration,” says Kowalski. But they have no other choice. At night it’s too dark to see, even with flashlights. Their only option is to pack things early in the morning, but even then, the weather is already warm.

Wetter says she became homeless after leaving an abusive marriage. She had raised seven kids but had no money or work experience to fall back on. She lived on her own for a stint, in an apartment in Sylmar.

When she lost that apartment, she moved in with friends, but when that lease was up, she and her boyfriend, Alex Sotello, had nowhere to go. In the last two and a half years, they’ve cycled between the sidewalk and another encampment near the train tracks that she jokingly called “the gated community.” When they got kicked out a few months ago, they moved to this location.

Under the tarp, Wetter sits next to Sotello and her daughter as they try to escape the heat. It’s not much better, though. During the interview, my phone turned off from overheating.

Wetter jokes that she wants to write a book titled Sittin’ Here. She lets out a raspy laugh. Staying put under the tarp is is one of the few activities she can do. If it’s not the heat keeping her from moving about, it’s excruciating back pain. “This is our life right now, sitting here,” she says.

Water is running low. Sotello has to bike over to the store to buy more. “[People with homes] come from the elements and they can go and turn on the air conditioning,” he says. “Say I work out there, and I come here. It’s the same thing. No change in temperature.” There’s no escape from the elements.

They all agree that heat is worse than the cold. “You can always get warm, whether it’s candles or clothes. It’s hard to get cool,” Wetter says.

Wetter is hopeful they’ll be able to get out of this situation soon. She’s waiting for a housing voucher to be approved. To do so, she has to follow certain guidelines. They include going to doctor’s appointments, a task that can be difficult when it means walking or biking in the sun.

“I consider myself a strong woman. I can survive this, but I don’t want to anymore,” she says. “It’s hard being homeless.”

Wetter loves to cook. Mexican rice and enchiladas are her specialty. Even in the encampment she manages to cook up dishes like pork chops and rice or chicken and gravy on little stove tops. She often cooks enough to share with others to make sure they don’t go hungry.

Her dream is to have a place of her own where she can prepare Sunday dinners for her grandkids. “I saw my granddaughter’s pictures on Facebook the other day, and she’s just so cute,” she says. Time feels like it’s suspended for a moment as she thinks about her grandkids. Her green eyes sparkle when the sun hits them.