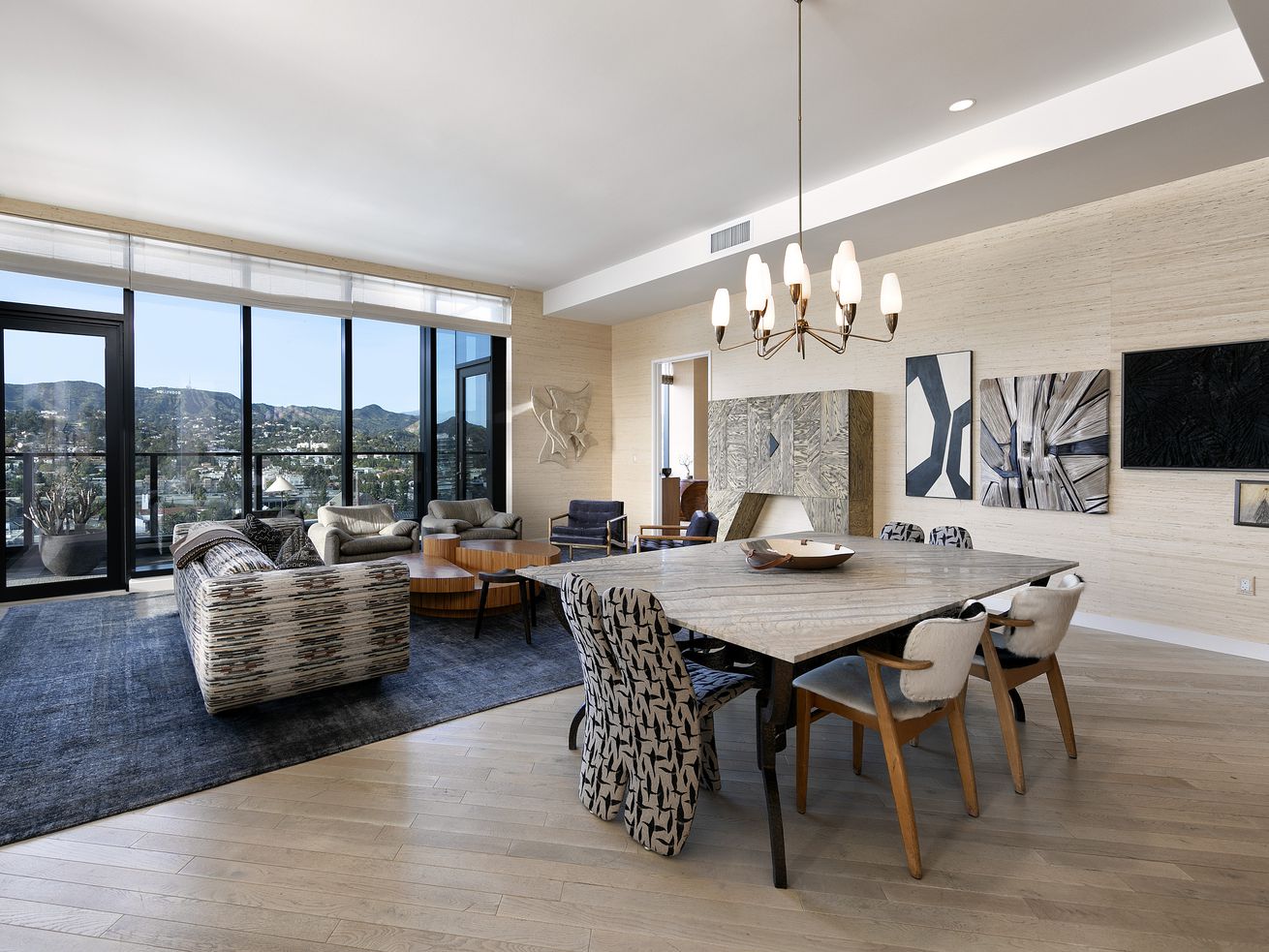 In the Golden Age of Hollywood, luxurious apartments rose up around the flourishing movie studios. Among the finest was Garden Court Apartments, a classical four-story brick building that opened on the boulevard in 1935. It had a ballroom and tennis courts and 190 lavishly decorated units with “hand-carved furniture, Oriental rugs, and baby grand pianos.”

The wealthy didn’t stick to Hollywood for long. They moved on to sprawling mansions in the hills, and from the ’70s through the early 2000s, the neighborhood, as famous as it was, became known among Angelenos for grit—not glamor.

Now it’s 2019, the Golden Age of Streaming. The studios and amenities are different, but ritzy Hollywood apartments are back.

A year-long lease has been signed for the penthouse at Columbia Square Living, a glass tower that rises 22 stories at the corner of Selma and El Centro—for $30,000 per month, according to Michelle McManus, business manager at property management company Alliance Residential.

The three-bedroom apartment features a wood-paneled walk-in closet, custom light fixtures designed by Kelly Wearstler, and floor-to-ceiling windows with views of the Hollywood Sign. The tower has a porte cochere, complimentary bikes, and a “24-hour attended covered parking garage.” There’s a rooftop pool, bar, restaurant, and play area for dogs.

“People want to move in with the lifestyle,” McManus says. “They want a doorman that knows their name, a valet who can park their car.”

It’s one of four furnished penthouses in the building, all leased for 12 months at $22,000 to $30,000 per month, according to McManus. One block away, at the newly opened The Argyle, a penthouse is available for a one-year lease at $16,995 per month.

For $25,000 a month, you could rent a four-bedroom single-family house with a pool in Los Feliz Village—but you’d have hire someone to park your car. For the Hollywood high-rises, it’s also about proximity to work.

Those changes have unfolded over the past five years, as more and more apartments have opened alongside coworking spaces like Neuehouse, private clubs like H.Club, and media companies, namely Viacom and Netflix, which will rent more than 1 million square feet of office space in Hollywood by 2020. The streaming company has 10 corporate units at Columbia Square Living, according to McManus.

“Focusing on the penthouses is inflammatory,” says David Ambroz, a city planning commissioner who has lived in Hollywood since 2006. “The more interesting article is the number of affordable, workforce housing, market-rate units, and and tourist infrastructure that’s been built.”

From 2006 to 2016, residential development in a large swath of Hollywood accounted for nearly 9 percent of all new housing built in Los Angeles, according to a report from the Hollywood Property Owners Alliance and Central Hollywood Coalition.

The newest large-scale residential development to open is El Centro, a beautifully-landscaped complex with a saltwater swimming pool, fire pits, and a gym, yoga studio, and sauna and interiors by Los Angeles-based design collective Commune.

It was developed alongside the Eastown complex. The two projects brought more than 1,000 new apartments to the boulevard, including about 100 affordable units earmarked for low-income tenants. Market-rate studios rent from about $2,400.

“It’s gratifying to see that Hollywood is still an attractive place and that people both want to live and work here,” says Richard Adkins president of Hollywood Heritage’s board of directors.

“But there are still so many projects in the process of being planned or built,” he says. “I don’t think we’ve witnessed the end of the changes.”

Plus, as Adkins points out, some of the Golden Age apartments are still desirable addresses.

While the Garden Court Apartments were torn down in 1984, ultimately replaced with a DSW, seafood buffet, and LA Fitness, the Trianon and La Leyenda are still standing. You can rent a one-bedroom for $2,385 in the the castle-like Hollywood Tower on Franklin Avenue.

When it opened in 1929, the building offered childcare, as well as personal maid, cook, butler, laundry, and valet service. There was, according to National Register of Historic Places records, “a private subterranean garage in this ‘aristocrat among Hollywood apartment hotels.’”

Maybe Hollywood hasn’t changed all that much.