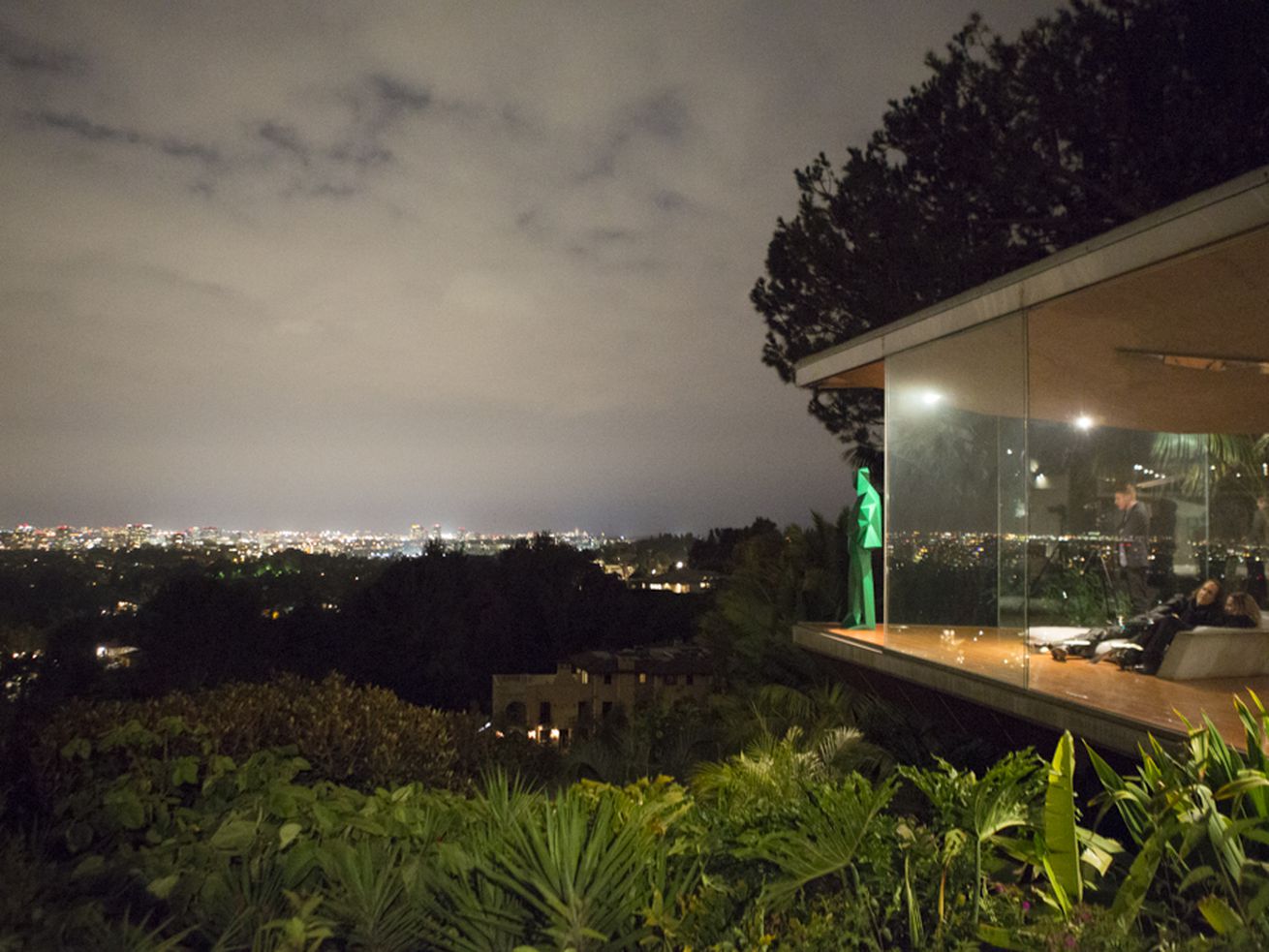 On a breezy May evening in 2013, hundreds of partygoers were shuttled up Benedict Canyon to the Sheats-Goldstein Residence. The iconic Los Angeles home designed by John Lautner was familiar to every guest, but on that night, it would appear utterly transformed.

Tucked into the house’s cement corners were a half-dozen site-specific pieces by French artist Xavier Veilhan, one of which was a surprise musical performance with Nicolas Godin, of the French electronic band Air. Guests sipped cocktails on a deck laced with nylon cording that knit the triangular roofline to the legendary pool. In the cantilevered window of the master bedroom, a facet-cut emerald sculpture of Lautner gazed out at the city below.

It was another ambitious installation from Francois Perrin, the type that LA’s design community had come to expect from the architect and curator who defied boundaries in his field and connected artists and designers across a wide orbit.

Perrin, who was also an avid surfer, died Monday in Ventura, just weeks after he was diagnosed with a rare spinal cord cancer, his partner, the writer Eviana Hartman, confirms. He was 50.

Born in Paris, where he studied architecture, Perrin had moved to the Los Angeles area nearly two decades ago yet continued to work in his native France and moved fluidly between the two countries.

Last year, Perrin was awarded the French Ministry’s Order of Arts and Letters at the Residence of France in LA, a testament to his connections which spanned across the city but also transcended geographic barriers, creating an ongoing cultural exchange with his multidisciplinary network of collaborators and colleagues.

“He brought a truly unique voice to a city that thought it had everything covered,” architect Tom Marble tells Curbed. “No one else made buildings like he did, which, to a one, were conceptually compelling on one level, oddly disturbing on another, yet absolutely original to the core.”

Perrin’s concept-driven architecture made a splash, like the Skatehouse he designed for the owner of a skateboard shoe company in 2011. Although the home, which was supposed to be built in Malibu, was never realized, a full-scale model where every surface is skateable was produced, including curved ramp-like walls and a built-in headboard above the bed for grinding.

But his architecture went beyond performative gestures. At first glance, Perrin’s 2012 Earthouse is yet another glass-box estate stacked into a steep hillside just below the Hollywood Sign. But the project, a collaboration with green builder Yves Lefay, is filled with clever sustainability innovations like a rainwater catchment system and a natural ventilation system that eliminates the need for air conditioning.

Perrin brought the same environmental sensitivity to a more recent installation for the 2017 Chicago Architecture Biennial, Air Houses: Design for a New Climate. Meant to address the disconnect between architects and the ecological needs of their building sites, angular structures made from silver fabric were suspended inside the Palm House of the Garfield Park Conservatory, a climate adaptation program for some unseen futuristic society.

“As an architect he had this love for the ephemeral and the phenomenal,” says architect Barbara Bestor. “These floating pieces in a hothouse full of plants, even the skateboarding, these are gravity-defying acts of architectural imagination where the material palette was fire, air, and leaves.”

Perrin’s love for ephemerality also informed his work as a curator. He coordinated dozens of group shows and installations, including a groundbreaking 2004 exhibition for the MAK Center for Art and Architecture in West Hollywood on French conceptualist Yves Klein.

“He has been a tireless activator and advocate for not only the MAK Center but also the Los Angeles art and architecture community at large,” MAK Center director Priscilla Fraser tells Curbed. “Seeing Francois at not only the MAK Center programming but at any cultural event always meant an engaging discussion filled with enthusiasm for any topic from sustainable energy to skateboarding.”

In 2013, Perrin served as curator and architect for Architectones, a collaboration with Veilhan for the French gallery Perrotin, which orchestrated ambitious installations in some of the world’s most famous modernist structures, including Mies van der Rohe’s Barcelona Pavilion and Le Corbusier’s Unité d’ Habitation in France, and the transformative installation at Lautner’s Sheats-Goldstein Residence.

At the time of his death, another of Perrin’s projects had just embarked upon a multi-city tour, The Environment-Bubble. An inflatable residence first envisioned by French-Canadian architect François Dallegret for British architecture critic Reyner Banham’s 1965 book A Home Is Not a House, Perrin turned the concept into part urban folly, part performance space, encasing participants inside a translucent plastic dome like a nomadic snowglobe.

After installations at sites in New York City and in Orleans, France, The Environment-Bubble was meant to be installed at the MAK Center as part of its current Shelter or Playground exhibition in February. The installation was ultimately not realized due to Perrin’s health, says Fraser.

A memorial for collaborators and colleagues is planned for Sunday, April 7 from 2 to 5 p.m. at the MAK Center, and a fundraising campaign has been set up to support Perrin’s family, including his 16-month-old daughter. Additionally, a surfer’s circle will be held on Saturday, April 6 at 8 a.m. at Topanga Beach—representing a whole other community Perrin was immersed in that his architect colleagues hardly knew.

“He just sort of managed to create this really remarkable web of people and ideas and projects,” says LA architect Frank Escher. “It drew not just on his encyclopedic knowledge of recent architecture and art history, it also drew on on his ability to connect with people. That’s the thing that made him so interesting, just the ease with which he built bridges and drew connections and made introductions. He was just a center of gravity.”