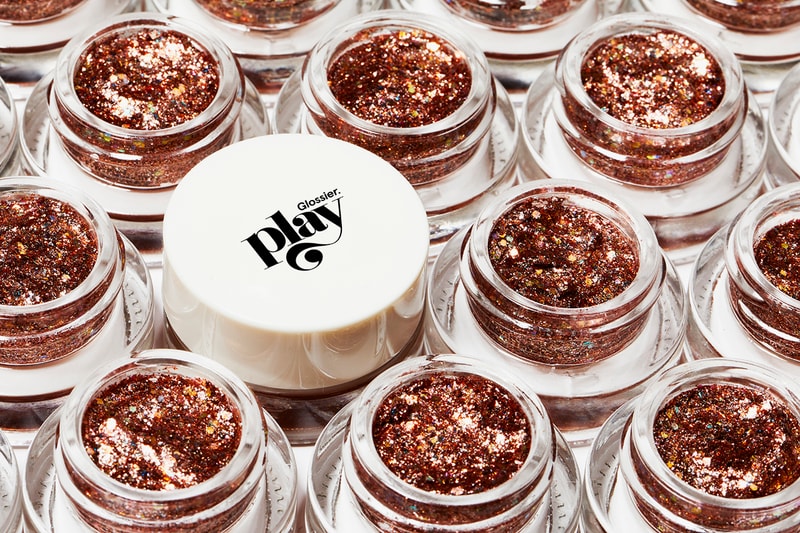 As longtime fans of Boy Brow and Balm Dotcom, we’d like to think that we’re pretty familiar with Glossier, but little did we know that the cult-favorite beauty brand has a sister. In February, the Emily Weiss-helmed company sent out a cryptic email to its newsletter subscribers hinting at a new brand called Glossier Play. And within less than a week, its Instagram has already garnered a huge following, with makeup fanatics commenting on posts about what they think the brand would be selling.

Despite speculations that it would be a line of sex toys or even a music label, it is officially announced today that Glossier Play is launching as a brand of "dialed-up beauty extras." The new color cosmetics line, which has been in the works for over two years, is created to spark excitement in your makeup routine. And this all begins with four fun, essential products: the Colorslide, the Vinylic Lip, the Niteshine and the Glitter Gelée. Besides the holiday-themed Black Tie Set released back in 2016, we haven’t really seen an eyeliner by Glossier in the past, and that’s what makes the new Colorslide eye pencil ($15 USD) a pleasant surprise. The eyeliner, which features a "highly pigmented, smooth gel formula," promises to be crease- and smudge-proof and claims to last up to 12 hours. The product is available in 14 matte and metallic shades, ranging from the shimmery pink "Candyland" to the deep indigo "Adult Swim." In case you’re wondering, the brand notes that the matte shades can last in the waterline for eight hours.

Alongside the release of Colorslide, Glossier Play is also launching a sharpener called Blade that comes with a thermoplastic cleaning stick for removing any color residue on the inside. A much bolder lippie than Generation G, the new Vinylic Lip ($16 USD) is a high shine lacquer that features a sleek packaging of a click-pen. According to the brand, the formula isn’t sticky and glides on smoothly. The lipstick is available in six day-to-night shades, including the bright red "Baby," the vibrant orange "Casino" and the dark taupe "Pony." If you love Haloscope but would love something a little more extra for party nights, look no further than Niteshine ($20 USD). The highlighter is a buildable concentrate made with a refined pearl powder that gives an iridescent sheen to the skin. Designed with a doe-foot applicator, the product allows you to precisely add glow to your cheekbones, brow bones and Cupid’s bow. Coming in four shades including "Deep Copper," "Platinum Rose," "Molten Umber" and "Pale Pearl," the Niteshine can even be worn on the eyelids as an illuminating eyeshadow. Now onto the most exciting product, the Glitter Gelée ($14 USD). A cocktail of a clear gel base and multidimensional paillettes, the multi-use product can be used as an eyeshadow or applied to anywhere on the skin to create a jeweled effect. It comes in four different shades, such as the coppery rose "Firewall" and the golden "Glass Bonsai." The brand is also introducing the Detailer, which is a tool that helps applying the Glitter Gelée with precision.

Much like Glossier’s Phase 1, Phase 2 sets, the Glossier Play range along with its two makeup tools can be purchased as a bundle dubbed Playground. The full set will be available at $60 USD, which will save you $15 USD if you do the math. All of Glossier Play’s products are cruelty-free.

Head over here to explore and shop your new favorite products.