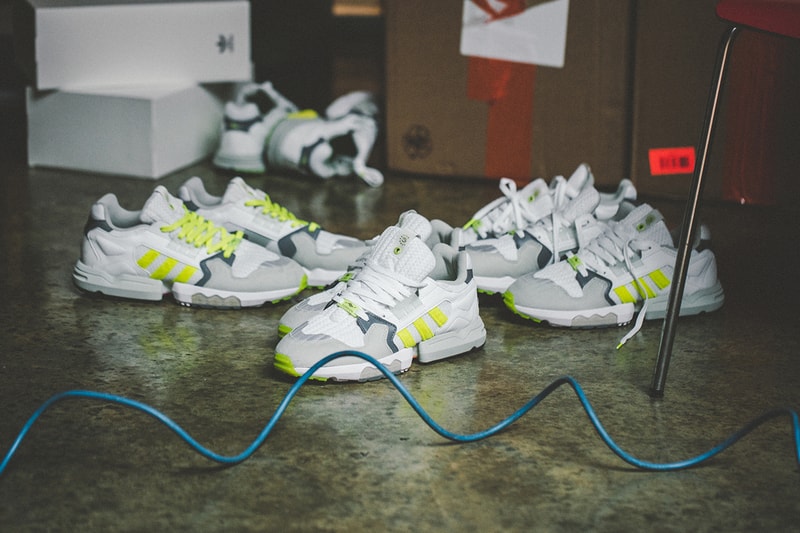 Footpatrol and adidas Consortium continue their long-standing partnership this Summer with the release of a carnival-themed ZX Torsion BOOST.

adidas Originals released the silhouette back in June, which showcased a combination of a vintage track-and-field aesthetic alongside an updated BOOST sole unit. Staying true to its roots, the sneaker features a TPU arch to join the heel and forefoot sections together and a host of retro design cues.

Footpatrol was inspired by London’s Notting Hill Carnival when designing its adidas Consortium ZX Torsion BOOST. It is part of adidas Consortium’s Communitas project, which will see four sneakers released throughout the year that "lift up the communities from which they came." As adidas continues to say in its press release, the Communitas project "provides a platform for highlighting local causes on an international scale, for promoting dialogue on the preservation of local cultures, [and] for championing the individuals that combine to make our communities great."

As a result, bright whites, subtle greys and flashes of neon yellow have been used to detail the upper, while the underside Torsion bar gets a colorful marble effect. The colors are continued inside the shoe, seen on the reimagined Footpatrol gasmask logo which now wears a traditional carnival headdress. The tongues are given the signature Consortium treatment, sporting a neon green rivet alongside dual-branding and W1/W11 postcodes, marking Footpatrol and Notting Hill’s addresses respectively.

The sneaker features Footpatrol branding all over its clean design, seen on the lace lock and the heel tab — which combines a neon yellow Torsion symbol into its moniker. Neon yellow laces and Three Stripes sit alongside tonal suede and textile panels which overlay the crisp white mesh upper. A final touch of 3M detailing on the toe box rounds off this collaborative pair.

Take a look at the campaign in the gallery above. It spotlights one of the most well-known steelpan bands, the Ebony Steel Band, as it prepares for its 50th anniversary and 2019 Notting Hill Carnival show. The Footpatrol x adidas Consortium ZX Torsion BOOST will pre-launch on August 24 and will see a global launch on October 11.

adidas Consortium x Footpatrol ZX Torsion | As part of this special release, we have partnered up with @DAZED & @33BOUND to curate a documentary around The Ebony Steel band. The band have been together for 50 years and are a steel pan band at the heart of Notting Hill Carnival. Head over to our blog to read more about this latest collaboration. #Footpatrol #TEAMFP #adidas #adidasConsortium #ZXTorsion #dazed @ebonysteelband @adidasoriginals

The adidas x Footpatrol ZX Torsion features a mixture of overlays on the upper with a mixture of stark whites, subtle greys with bursts of neon yellows lifting the shoe. The Torsion bar itself is coated in a vibrant marble effect of colour, bringing a sense of spirit that carnivals are known for. Head over to our blog to read more about our latest collaboration. Coming soon to Footpatrol. #Footpatrol #TEAMFP #adidas #adidasConsortium #ZXTorsion #dazed @EbonySteelBand