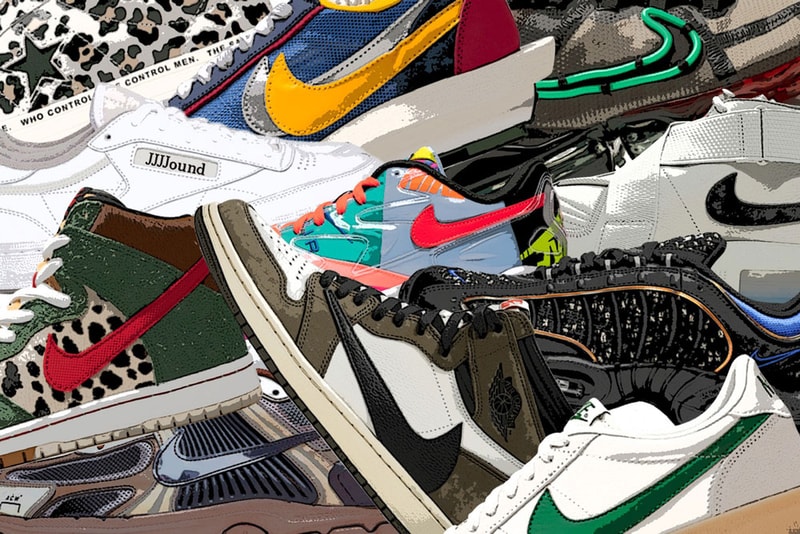 We’re already at the halfway mark of the year and it’s apparent that the first few months of 2019 has already seen some grail-worthy sneaker releases. From the usual brand collaborations down to the unsuspecting general release drops, there’s much to be said about how competitive footwear brands have become in terms of releasing the most covetable designs today. We’ve witnessed Nike partner up with more up-and-coming fashion brands and adidas co-signing some major music talents to one-up their rivals on the collab front. However, it seems like whatever other sneaker brands try to pull off, they always seem to be playing catch up to The Swoosh.

HYPEBEAST editors collectively got together to pick some of what they think are the best kicks of 2019 so far, and it’s clear cut that Nike designs lead the pack. With the help of Stadium Goods, we were able to narrow down some of this year’s most hyped sneakers and our tastes vary from the more ostentatious creations to the lowkey, simple-yet-effective styles. Check our picks below to see if some of your favorites made the list. In addition to creating eye-catching merch pieces for Kid Cudi and A$AP Yams for Yams Day this year, Cynthia Lu, founder and designer of Cactus Plant Flea Market also linked up with motocross gear purveyors Alpinestars for a complete head-to-toe capsule. But perhaps the most buzzed about design to come from CPFM is its collaboration with Nike in the form of the Nike Air VaporMax 2019. Early friends-and-family pairs of the shoe included a light-up feature around the sole but non light-up versions still caused some frenzy amongst sneakerheads once released. You can attribute the excitement to the kicks’ quirky look with its garden wire swoosh, 3D lettering and signature smiley face insignias. The pair could well be a worthy front-runner for best kicks at the end of this year as well. — Felson Sajonas Though 2019 has been a great year for brilliant design, ingenious collaborations and progressive silhouettes, one shoe has stuck in my head since it first appeared in March. Frog Skateboards’ collaborative Nike SB Blazer was one of the most inspired shoes I’ve seen in months, a hybrid of attractive detailing and earnest fun. Frog Skateboards’ cute chenille mascot sits on the lateral side atop a tonal suede Swoosh, blending touchable textures with a wearable amphibious color scheme. Lowercase “frog” branding on the heel panel, bug doodles on the laces and adorable hand-drawn branding on the reverse side of the co-branded tongue tag complete the clever shoe. It was only released at select Nike SB skate shops, reminding everyone who collects their kicks that shoes are meant to be worn. — Jake Silbert It’s easy to choose one of the more hype collabs, but this one was relatively under the radar. Converse has had an interesting run of collaborations, working on an ongoing basis with the likes of TAKAHIROMIYASHITATheSoloist. GOLF le FLEUR* and Carhartt WIP. But perhaps the most interesting collab of all is the one with Brain Dead.

We often see brands using “looking to the archive” as a mere talking point, but that’s clearly been the case with this collab. The result of this crate digging is a blend of fabrics and patterns that shouldn’t work as one shoe at all. The mix of leopard print, polka dots and zebra print has no real right to work together, but it does. — Jason Dike The first installment of sacai’s long-awaited Nike collaboration is a good bet for the most hyped sneaker of the year, but the buzz is more than deserved. As someone who generally looks towards more understated footwear, I didn’t expect to like the sacai x Nike LDWaffle Daybreak as much as I did. The sneaker itself is pretty over-the-top, with a doubling up of all the classic Nike elements, while the first two colorways to release — officially dubbed “Green Gusto/Black-Varsity Maize-Safety Orange” and “Varsity Blue/Del Sol-Varsity Red-Black” — make the sneaker even more eye-catching. With the repeated laces, tongue, Swoosh and even sole unit, the LDWaffle Daybreak is a case study in how to modernize an archival silhouette. — Jack Stanley Obviously Nike’s "Walk the Dog" Dunk High highlights a dog motif, complete with poop-stained bottoms, a dog collar tag, and insoles printed with puppers. The quarter panel even features Dalmation print and it’s all very adorable. However, this April 20 released shoe is also a clever reference to the sweet hybrid strain Dog Walker OG. It’s grassy green suede also doubles as bud texture, the tongue reveals a hidden stash compartment, and the dog tag even reads "Sparky" if you’re not picking up on all the entendres. These take the "White Widow" motif from last year’s weed-influenced shoe and gets even more creative with the themes and parallels. And isn’t creativity what Nike SB is supposed to be all about? — Isaac Rouse Judging by our comments section, my pick — the Supreme x Nike Air Max Tailwind 4 "Black" — will surely come with a bit of backlash. "Some of the ugliest trash I’ve ever seen," wrote one commenter. Listen, I get it, the Tailwind 4 was never a popular model. It presents an odd shape that’s not particularly flattering, and to be totally honest, it’s not nearly as comfortable as other Air Maxes from that era, hence why it’s taken Nike 20 years to bring it back. But, the Tailwind 4 holds a special place in my heart. I owned a black and red pair way back in 2000, and absolutely loved the look with my baggy bottoms, until they were stolen from my gym locker. So, for me, it’s more about nostalgia and the time period it represents. I chose the black and blue colorway because I’m also an Orlando Magic fan. — Bob Marshall As someone that doesn’t really wear anything sporty, I usually stand clear of runners. But A-COLD-WALL*‘s Nike Vomero Zoom +5 collaboration definitely caught my eye when they dropped early this year. Aside from the dynamic upper on the shoe, the polarizing block heel counter on the model sews the athletic elements found in the design into something familiar yet undefinable. If I wasn’t already sold, Samuel Ross unveiled a follow up "Solarised" colorway which features a hand-dyed technique developed by the ACW studio. The unique decoration process creates a melange of abstract tonal patterns that make each pair unique. For those who know me, I truly love weathering and distressing and the character it can add to everyday items and the "Solarised" colorways falls right into the aesthetic that I often look for. — Nicolaus Li Apart from green being my favorite color, I also appreciate the simplicity of the sneaker. Although I do not wear J.Crew, I recognize its importance in American fashion, and with making this Killshot exclusive to J.Crew, they are able to attract potential consumers they normally would never reach. The colorway reminds me of the original Stan Smith tennis shoes that my dad would wear when I was a kid. He swore by those trainers, so I am not sure if some of that nostalgia is playing into this "Sail Green" and cream colorway for me. The gum sole is a factor for why I like them too. They could have stopped with a white outsole but that gum sole just adds another great detail to a classic. I could see myself buying a few pairs and wearing them for years since I know they’d never go out of style. — Ambrose Leung Maybe it comes as no surprise that I’ve chosen the BAPE x adidas UltraBOOST as the best sneaker of 2019 thus far. However, it’s hard to ignore what happens when the two frequent collaborators come together, each time turning something only sneakerheads can dream of into a reality; and not to mention the duo have yet to create something that hasn’t been welcomed with open arms. Although the UltraBOOST has lost a bit of momentum since being introduced in 2015, it still remains a comfy go-to option for me. Also it doesn’t hurt that this silhouette is dressed in BAPE’s ubiquitous camo and is assisted with an all-black BOOST midsole. — Mallory Chin The atmos x Nike Air Max2 Light takes the best of the ’90s trend and implements it in all the right ways. Its acidicly bright color palette, sporadic logo placements and patchwork aesthetic are a feast for the eyes, while the translucent overlay provides just enough modernization for the new age. Following behind a number of other collaborations between atmos and Nike, their eclectic Air Max2 Light is one that’s hard to miss and even harder to forget. — Nia Groce Sometimes a silhouette is so good it barely needs any tweaking. There are a handful of designers that really know this, and Justin R. Saunders, or JJJJound, is himself a good example. The Club C 85 silhouette has been worked on over the last few years, but JJJJound’s take might well be the one that outshines the original. Subtle details like the soft greyed out inner collar, retro ecru tongue and monochromatic branding add just enough without veering too far from the vintage sensibilities of the classic. The sneaker comes at a time where the current market is flooded with loud, space-age futuristic creations. So not only is the JJJJound x Reebok Club C a clean-cut footwear piece, but it’s this year’s anti-sneaker that wades against the trend by honoring the past and offering a simple refresh. — Charlie Zhang If there’s one artist currently thriving off of the expanding lifestyle economy that hip-hop has to offer, it’s Travis Scott. Pertaining more towards sneakers, Nike and Jordan Brand‘s continued partnership with the famed rapper has been an interesting road, one that has seen silhouettes and models fly off the shelves since the collaborative effort began last year. The follow-up to the Air Jordan 4 collaboration, the Air Jordan 1 “Cactus Jack", has been arguably one of the most hyped released so far this year. Design-wise the shoe takes a rather subtle approach, reverting the lateral swoosh and employing a variety of details that include a hidden stash pocket and various Cactus Jack branding throughout. — Torsten Ingvaldsen With all the sneakers releasing each week, it’s hard to find something that is both easy to wear with anything and ensure that you won’t bump into someone wearing the same. These OAMC Cutaway Oxfords go with pretty much all the pants I wear and are just a smarter look for the weekdays when you want to balance the casual look out. It’s not a sneaker per se but it’s a worthy alternative for those looking for something much cleaner. — Arby Li The Nike Air Fear of God Raid is one of the best examples of Jerry Lorenzo’s undeniable attention to detail. Tonal as it looks, the designer has thoroughly examined every characteristic his silhouette has to offer, ranging from stitching down to the overall on-foot feel. The cross-straps are an ode to the original Nike Air Raid he loved from his childhood. Not only does it add a personal touch to his creation, but also establishes an additional design element not commonly seen in modern-day sneakers. — Sophie Caraan