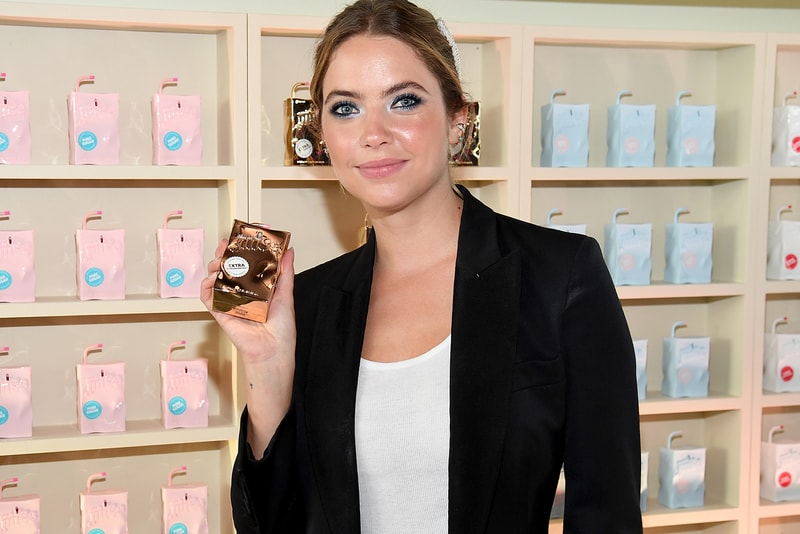 Cosmopolitan just launched its very first perfume called Eau de Juice with Ashley Benson as the product’s spokeswoman. Part of Hearst Magazine, executives from the company started discussing a partnership with Luxe Brands, the company behind Ariana Grande and Justin Bieber’s fragrance lines, over a year ago. As a result, the fashion and entertainment publication debuted a line of four scents this week.

Coming in "100 Chilled," "Love Unfiltered," "Extra Concentrated" and "Pure Sugar," the product comes in a “very Instagrammable" and "very eye-catching” bottle according to Noreen Dodge of Luxe Brands. According to WWD, the name of the magazine is actually nowhere to be found on the juice box packaging. It only appears in small white text on the bottom saying that Eau de Juice is “served by Cosmopolitan.” Steve Ross, Hearst’s global chief licensing officer and head of brand development says:

“If you look at the bottles, for which we have a design patent-pending, and aesthetics of the overall campaign, you can really see this brand come to life in a cheeky and whimsical way. That was intentional and we really leaned-in to our brand differentiator to find our own niche in a highly competitive fragrance market.”

Previous magazine publications have attempted to launch its very own fragrance as well, but Ross believes that the research and development of Eau de Juice will make it a success story. Cosmopolitan‘s Eau de Juice retails at $55 USD which is now available exclusively at Ulta Beauty and in stores nationwide on August 5.

Introducing Eau de Juice, our brand-new fragrance line available exclusively at @ultabeauty. ?The collection comes in four high-end scents and—let’s be honest—you and your Insta feed need ’em all. Visit the link in our bio to shop. ?