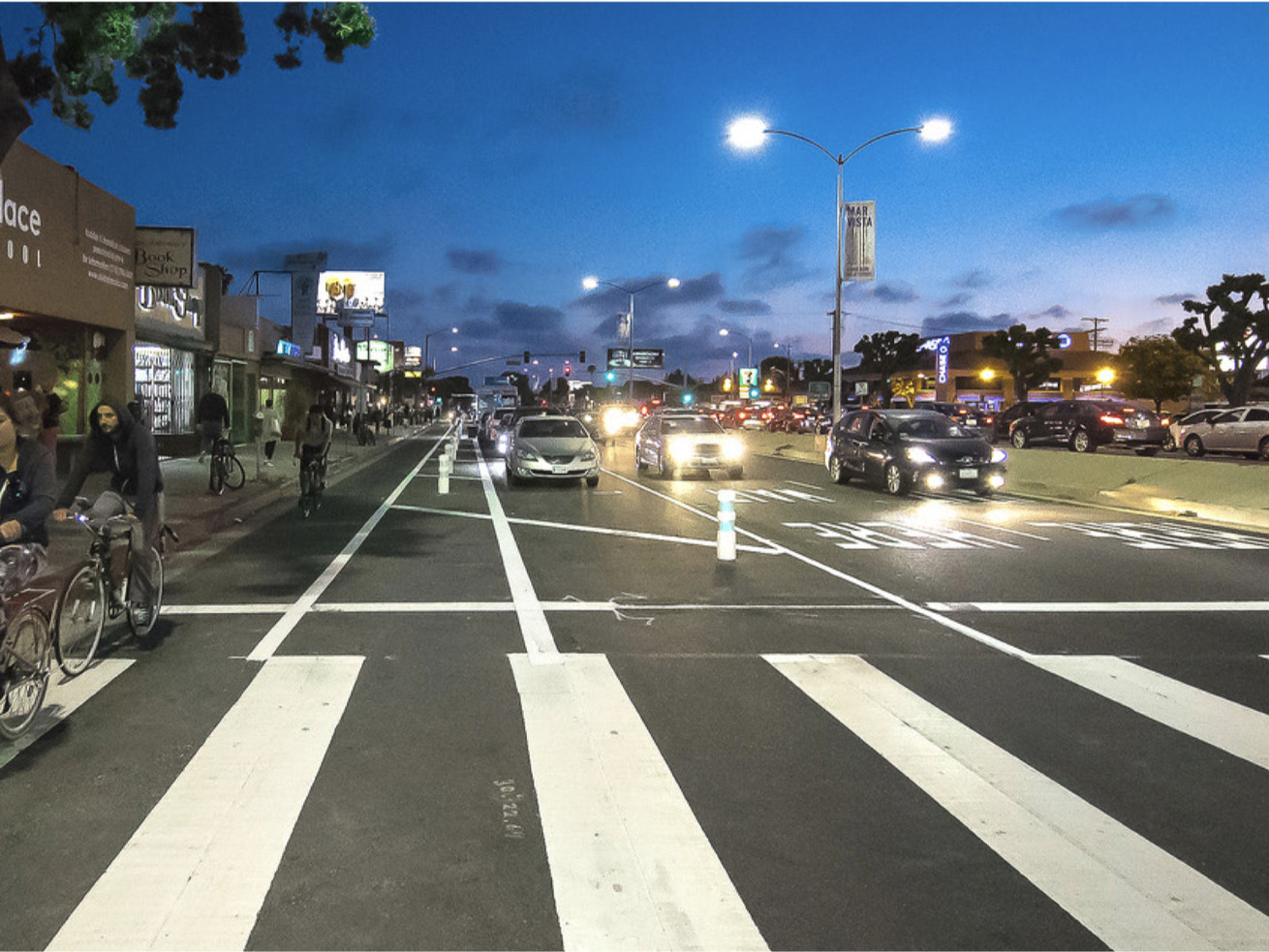 The decision will keep in place lane reductions in Mar Vista

The Los Angeles City Council unanimously rejected an appeal Tuesday from critics of a polarizing streetscape project that’s transformed just under one mile of Venice Boulevard in Mar Vista.

In the estimation of Councilmember Mike Bonin, who represents the area, the lane reductions and pedestrian safety measures implemented as part of the project have been a success.

“People like the new Venice Boulevard,” he said during a committee meeting last week, pointing out that traffic collisions are down and that a host of new business have opened along the street since the overhaul began in 2017.

“When you go out and interview random people on the street, people like what this project has done for Mar Vista,” Bonin maintained.

Mar Vista Community Council member Mary Hruska told the committee that the road reconfiguration had “ignited a feud which has riven our formerly placid and welcoming neighborhood apart.”

Last month, the Westside Los Angeles Neighbors Network, which formed last year to oppose plans for other streetscape projects on the Westside, appealed a December decision to make changes to the road permanent.

“No one is happy with the state of Venice Boulevard. And now the City is wasting more taxpayer money making this failed project permanent,” wrote the group’s president, Selena Inouye, in a statement.

Part of Los Angeles’s Great Streets initiative, the Venice Boulevard project reconfigured the stretch of road between Beethoven Street and Inglewood Avenue, reducing the number of automobile lanes from three to two in each direction. At the same time, the city’s transportation department added multiple turn lanes, high-visibility crosswalks, and protected bike lanes running the length of the corridor.

The changes were first instituted as part of a year-long pilot project aimed at cutting down on deadly crashes. Collision data gathered by the city show that between 2003 and 2016, 360 injuries and five traffic deaths were reported on the 0.8-mile segment of Venice Boulevard.

A report on the pilot compiled by transportation consultant Fehr and Peers found that no serious injuries or deaths had occurred during the 12-month trial period. The report was released in December and soon after, the transportation department announced that the project’s lane reconfiguration would become permanent.

In its appeal, the neighbors network argues that an environmental assessment should have been carried out for the project, mainly due to its impact on traffic congestion in the area.

According to the Fehr and Peers report, travel times in the eastbound direction increased significantly after the project was implemented, though they came down after a left-turn lane was added at Centinela Avenue.

In September, it took roughly 1.5 minutes longer to travel the eastbound route during peak afternoon hours than it did in 2015. Trip lengths before and after the project were much closer in the westbound lanes.

Opponents of the project say these numbers don’t take into account cut-through traffic on nearby streets and the number of future vehicles drawn to new development projects on the Westside.

But the transportation department points out in a response to the appeal that, since a recent update of the state’s environmental review law, “automobile delay” is no longer considered in and of itself a “significant impact” requiring a full environmental study.

It was clear at last week’s committee meeting that the project has been popular with some community members.

“I remember what it was like trying to cross that street when I had two little kids in tow,” she said. “We just tended to avoid the businesses on the other side of Venice.”