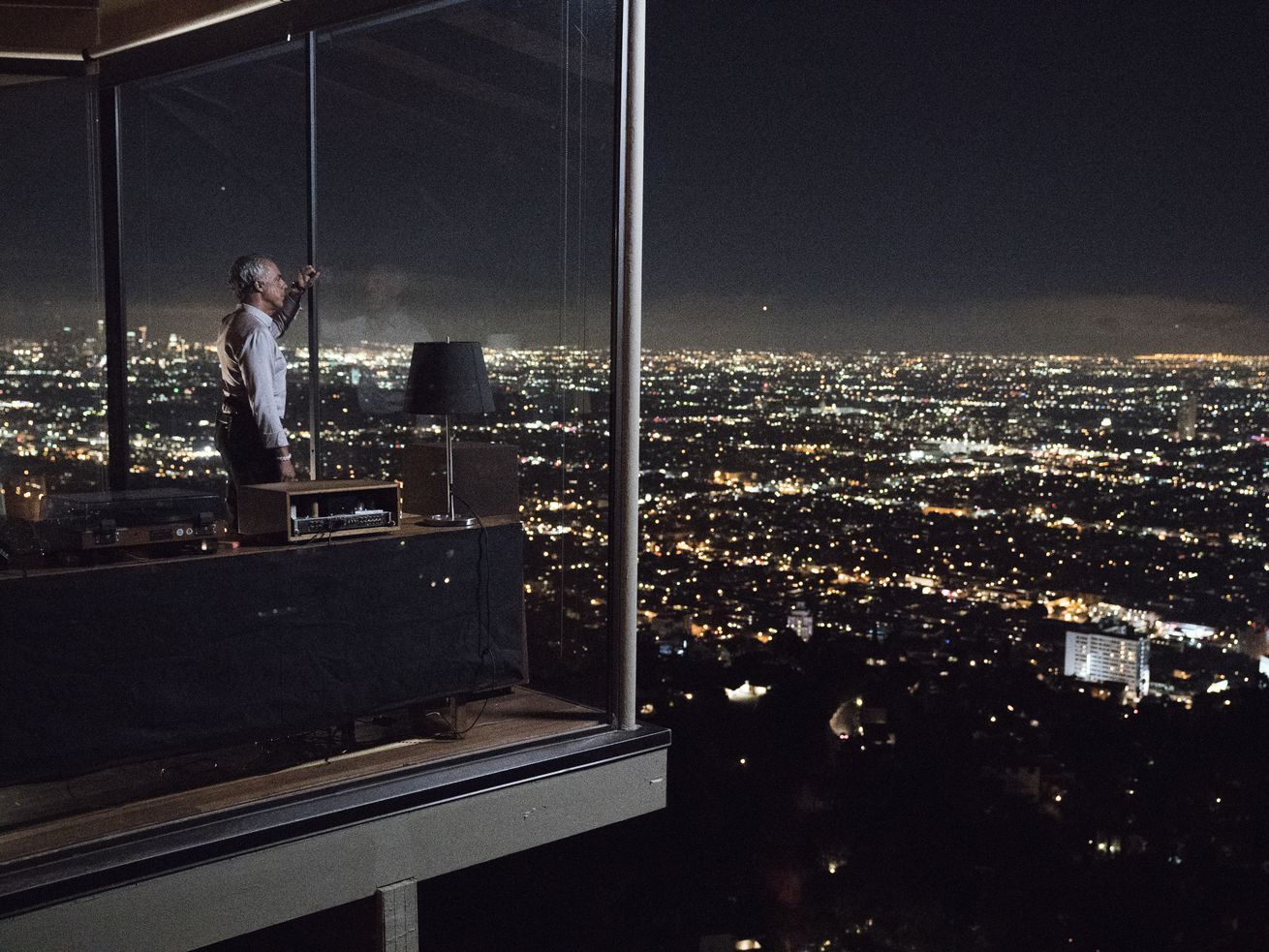 The Amazon series is inextricably linked with the city

In Season 4 of the long-running Amazon crime procedural Bosch, a prominent civil rights attorney is murdered on Angels Flight, the historic funicular that runs between Bunker Hill and Downtown’s Historic Core. The location itself was important: Not only did the series’ creative team pull it directly from the sixth installment of Michael’s Connelly’s bestselling Bosch book series, the book itself was actually called Angels Flight. Ironically, it almost didn’t get to shoot there at all.

“It came down to the wire,” says Bosch supervising location manager Paul Schreiber.

He’s not kidding. Angels Flight was decommissioned in 2013 following a derailment, and, as production on Season 4 loomed, it was unclear whether the railway, which was then undergoing safety upgrades for a planned summer 2017 relaunch, would even be ready in time for the production to film there.

“If we didn’t get that, our story would have suffered,” says Bosch writer and producer Tom Bernardo. As he puts it, the symbolic weight offered by Angels Flight made the prospect of using a different location difficult to imagine. “That’s a great example of where the city truly is a character… It’s one of those things [where] if you took it out, you can have the same plot elements, yeah—‘lawyer is murdered on a train’—but it has nowhere near the resonance that it does in the book or in our show.”

The Angels Flight shoot ultimately panned out, but the behind-the-scenes panic over the potential that it wouldn’t is indicative of how the series—which premieres its fifth season on Friday—has become inextricably linked with the city itself. Unlike so many other shows that use LA as a setting, Bosch is filmed almost entirely within the city and its surrounding areas, and how it’s depicted feels unusually authentic to the way actual Angelenos experience it.

“I feel like our team is, creatively and production-wise, very committed to capturing that,” says Bernardo.

Indeed, Bosch isn’t dominated by iconography like so many other productions set in LA.

“If you’re living in LA or you’re from LA, one of the things is, the way the city is depicted people feel like it’s very on-the-ground… it is very matter-of-fact,” Bernardo says. “We don’t come off a big sign and tell you exactly where you are. We just sort of drop you into the story, and the story plays out as it is.”

Connelly, who created and executive-produces the series and remains intimately involved in the production, was determined to keep things real. Having optioned the first two Harry Bosch books to Paramount Pictures in 1995 (along with the rights to the character), he was prohibited from shopping the TV series for 15 years. In the intervening decade-and-a-half, the novels became wildly popular, making Connelly the new standard-bearer of an LA noir tradition kicked off by Raymond Chandler decades earlier. By the time the author got hold of the rights again (following a brief legal scuffle with Paramount that was ultimately settled for an undisclosed amount), his clout had substantially increased, and he used that clout to dictate the terms of the series’ production.

“He was in this really privileged position to be able to say, there’s certain non-negotiable terms,” says Bernardo. “And one of them is, we have to shoot in LA, and we have to capture LA.”

Given the city’s sprawling patchwork of diverse neighborhoods, “capturing LA” is a complicated proposition. But for Connelly and the show’s creative team, it means avoiding the Hollywood stereotypes that tend to reduce the city to a collection of stock images.

“Most of the [LA-set] shows that we see, a lot of it feels like it’s filmed west of the 405,” says Bernardo. “It’s a very different LA than being Downtown near Skid Row, like we were in Season 3.… there’s a lot of different versions of the city in this place. And I feel like we go to these places and depict them geographically and story-wise as they are.”

For Schreiber, this approach has resulted in a professional experience delightfully at odds with some of his previous LA-set projects. “I did two shows that shall be nameless where the characters—shocker—have some money, and it literally became [about finding] places for them to meet, eat, drink and sleep around,” he says. “It’s mind-numbing as a location scout to work on those shows.”

It’s not as if Bosch eschews the city’s landmarks altogether. Over the course of the previous four seasons, the series has featured such quintessential LA locations as the La Brea Tar Pits, Musso and Frank, LA City Hall, Norm’s Restaurant, and Du-par’s at The Original Farmers Market. The latter of these settings ticked a number of different boxes for a pivotal scene in which Bosch’s ex-wife Eleanor is gunned down in front of him by a mysterious figure on a motorcycle. For one thing, the restaurant fit Connelly’s mythology, having been name-checked as one of Bosch’s favorite haunts in the novels.

“I knew it was the right place to do it,” says Schreiber of the location, which was originally suggested by executive producer Pieter Jan Brugge. “Because Harry’s always going to Du-par’s… talking about the pie and whatnot.”

The location also made geographical sense as a meeting point for Bosch and Eleanor, who in the episode were commuting from Hollywood police department station and Park La Brea. After all, Schreiber rightly points out, “they’re not gonna meet in Sherman Oaks.”

This commitment to authenticity runs throughout Bosch; its appeal in part hinges on an unusually faithful rendering of the streets the show’s LA-based fans navigate every day.

“It seems so small, but if we say that our characters are driving down Sunset… we are [actually] on Sunset,” says Bernardo. “We’re not like picking a place out in the Valley that’s easier to handle logistically and passing it off as Sunset.”

Perhaps the most sought-after location for fans of the show is Bosch’s hillside home, which provides a gorgeous view of the LA Basin. While it’s something of an upgrade from the house detailed in the books (Connelly describes it as “not much bigger than a Beverly Hills garage”), the space is nonetheless devoid of some of the plusher appointments normally found in a Hollywood Hills trophy home.

In Schreiber’s estimation, the house—a cantilevered two-bedroom, two-bath built in 1958 just north of Sunset Plaza—mirrors Harry Bosch’s unadorned ethos; for the single-minded detective with few hobbies outside of jazz, there’s no need for frills.

“Most of the houses in the Hollywood Hills, you walk into them, you’re going to find a wonderful kitchen, a beautiful pool, a beautiful driveway,” says Schreiber of the house, which Brugge had originally used for the 1995 Michael Mann classic Heat. “This house is so simple that it basically is one room with a view. And that’s why it works so well for this character.”

“The thing that strikes me is that there’s something about Harry Bosch that is intimately identified with the totality of the city, the whole of the city… he sees it and he feels it, but he’s also at a remove,” says Bernardo. “And he’s alone. He sort of plays into that sort of lone wolf character, and he’s up there by himself, but he’s a guy who can never leave LA—he is LA in so many ways—but [he] also wants a certain distance from it, a certain remove from it, a certain angle on it that most people might not otherwise get.”

With each season of the show tending to center its plot around a specific area of the city—last season, Downtown was extensively featured thanks to the prominent use of such locations as Angels Flight, the Bradbury Building, and the Biltmore Hotel—the fifth season, which will center its plot on a murder linked to the opioid epidemic, is looking to be San Fernando Valley-heavy.

“A lot of pharmacies and doctor’s offices in the Valley,” says Schreiber on what to expect from the season’s locations. “That, and zombie[-like] opioid people that are victims and their lives and the places that they inhabit.”

“We’ll be out in sunny Pacoima, because they [find] a pill mill out there,” says Bernardo, who adds, “It’s also near the [Whiteman] Airport out there, which will play a role in the story.” Agua Dulce will also be featured, he notes, as will a very iconic noir location on the other side of the hill.

“There’s a big reveal in this scene at the Frolic Room on Hollywood Boulevard,” says Bernardo, who wrote the historic bar into one of Season 5’s episodes without knowing whether they’d even be able to secure it. “I didn’t know because of where it’s located right there on Hollywood Boulevard… whether it was just gonna be logistically a tough pull for our team getting the permits and finding the time to bring our crew up there, etc.,” he says.

The scene at the Frolic Room will also be a first for Connelly. “Michael Connelly’s never appeared in the show and he was there that day and a director said, ‘Would you like to be in the background as these characters are talking?’” says Bernardo. “And there he is, sipping a drink. It’s very noir.”

While future seasons will inevitably retain the vérité feel Bosch fans have come to depend upon (Bernardo and the other writers are already hard at work on Season 6), Schreiber has a few other iconic locations in mind going forward.

“I mean, we’ve never shot at Pink’s [Hot Dogs], at least not yet, [or] Pacific Dining Car,” says the location manager, who notes that the show once tried to incorporate French dip emporium Philippe’s but was ultimately unable to secure it. Having worked on the show now for five seasons, Schreiber is always on the lookout, even in the off-season.