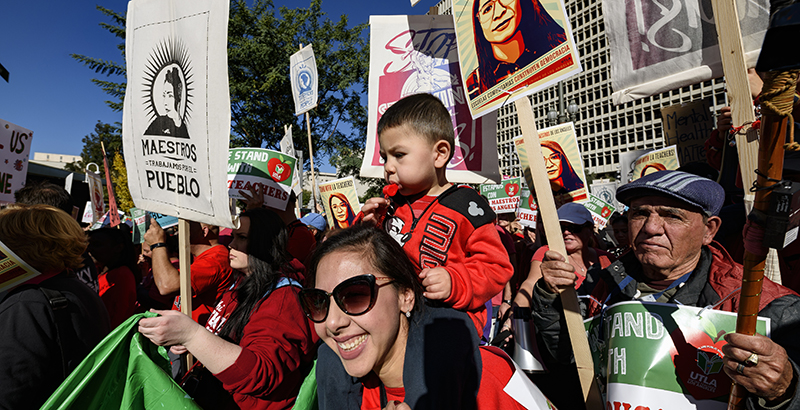 This is one in a series of articles detailing the recent negotiations between the Los Angeles Unified School District and its teachers. Other recent headlines about why we now seem headed towards America’s largest teacher strikes in a generation:

—Behind the Looming L.A. Teacher Strike, Crippling Long-Term Debt That’s Left the City Little Room to Negotiate — and May Ultimately Doom the District to State Takeover

—L.A. Teachers Are Borrowing the #RedForEd Hashtag and Talking Points, But Here’s How Their 2019 Strike Would Differ From 2018’s Red State Walkouts

—As Los Angeles Braces for Its First Teacher Strike in a Generation, Some Echoes Resonate From 1989

Even as the Los Angeles Unified School District and United Teachers Los Angeles continued negotiations on Friday, the city was preparing for a possible teacher strike come Monday morning. It would be the country’s largest strike in decades, and the first in Los Angeles in a generation.

A recap of how we got here, and eight big developments that happened over the holiday break that brought UTLA several steps closer to striking:

The two sides agreed after the new year to resume negotiations on Jan. 7. Prior to the meeting, UTLA said in a press release that it was willing to return to the bargaining table “if the district has a legitimate and clear offer for us to consider.” But in order to make any progress, UTLA President Alex Caputo-Pearl told KPCC on Jan. 3 that the district has to “start with proposals that indicate a basic willingness to stand up for district students, the district itself and district educators.”

“We know that there’s going to be a compromise at the end of the day, but big ticket items” like class size, staffing and limiting standardized testing “are pretty foundational, along with charter accountability,” Caputo-Pearl said. (The union has since dropped its standardized testing demand).

Last Monday’s talks ended with no agreement, with the district saying UTLA had rejected a sweetened offer that added $75 million to invest a total of $105 million to help reduce class size and add nearly 1,000 more teachers, counselors, nurses and librarians. The district announced Thursday it was revising its contract offer again in anticipation of talks Friday afternoon.

As of midday Friday local time, talks were continuing.

In December, a neutral state-appointed mediator released a non-binding fact-finding report — the last step in the labor negotiations process before the union could legally strike.

The three members on the panel agreed that the union should accept the district’s 6 percent salary raise proposal: 3 percent retroactive for 2017-18 and 3 percent for 2018-19. The report supported some of the union’s demands, including designating more funding to lower class sizes and to hire more nurses, counselors and librarians.

But the union’s leadership claimed UTLA had not agreed to a 6 percent raise. UTLA then announced a Jan. 10 strike date on Dec. 19 — the day after the report’s public release. (The date was later shifted back to Jan .14).

Beutner told KPCC last week that L.A. Unified had fruitlessly approached UTLA with an updated offer in late December. That updated offer, he noted, reflected numerous recommendations from the fact-finding report. For example, it dropped provisions such as making the 6 percent raise contingent on the addition of professional development hours for teachers. The district made other contract changes, outlined here.

“We all want the same set of things,” Beutner said. “The challenge is how do we do it with the resources we have.”

UTLA interpreted the exchange differently. It countered that it “isn’t refusing to bargain,” but rather didn’t believe what L.A. Unified sent — a chart in an email — constituted a formal contract offer. The union later rejected the “so-called offer.” It “was an unorthodox way to make a proposal,” Caputo-Pearl told KPCC.

3 L.A. Unified attempted a legal complaint to protect special needs students if there is a strike

L.A. Unified announced Jan. 3 it was pursuing a legal complaint to block UTLA members “who provid[e] educational services to LAUSD special education students” from striking, citing harm to those students and conflicts with mandates that protect special needs children.

There are more than 60,000 special education students in L.A. Unified who could “suffer irreparable harm through the deprivation of services” during a work stoppage, the court filing to a federal judge read. Children with unidentified disabilities would also “be delayed in being identified as eligible and be deprived of services and in, some instances, students with serious disabilities will be placed in extreme danger of injury.”

Special education students are protected by federal and state special-education laws. L.A. Unified’s special education services have also been monitored by a federal judge since 1996 and since 2003 under a Modified Consent Decree.

The district’s court filing was a request to a federal judge to move forward with a formal complaint. The judge rejected that request the following day, writing that the court “cannot act on mere speculation that if the strike occurs [LAUSD] will fail to meet” requirements under the decree.

The union denounced the court filing as “a Hail Mary pass” that’s “using our most vulnerable students as pawns.”

“Going to federal court is a transparent attempt by LAUSD to bring the UTLA/LAUSD labor dispute into an arena where it doesn’t belong,” UTLA wrote. “The fact that he [Beutner] is now singling out special education teachers shows how valuable they are to our most vulnerable students. We hope Beutner sees the error in this strategy and brings real proposals to support these teachers and students to our meeting with LAUSD on Monday.”

4 L.A. Unified has hired hundreds of substitute teachers in preparation for a strike

The LA Daily News on Dec. 28 reported that L.A Unified has hired about 400 substitute teachers who would fill in during the work stoppage.

“We have a duty to provide an education to our students, and we will take appropriate measures to do so,” L.A. Unified officials said in a statement.

UTLA blasted the hiring news earlier this month, claiming that it’s “irresponsible to think that 400 substitutes can educate more than 600,000 students.” It added that the union believes “it is illegal for the district to hire people outside our bargaining unit to teach in LAUSD classrooms.”

There are more than 2,000 substitute teachers who are part of UTLA, according to union officials. The district would not confirm if any of the substitute hires are affiliated with the union.

Two days after announcing a January strike date, Caputo-Pearl called for a cap on charter schools in L.A. Unified.

There are 224 independent charter schools in L.A. Unified serving about 110,000 students. In 2010, there were 69,000 students enrolled, according to district data. The union has repeatedly rebuked charters for luring students — and, therefore, millions in state funding — away from traditional public schools.

The call for a cap is not part of the formal union contract negotiations, but Caputo-Pearl said he is bringing it up because “it’s out there in the conversation right now.” UTLA’s proposed contract, however, calls for union involvement in the co-locations process, which is when charter schools are allotted unused classroom space on traditional school campuses under state law.

The district has denounced notions that education reform — like charter school growth — is a ploy to privatize and dismantle the public school system. “At no time has the Board of Education or Superintendent mentioned any support for ‘privatization,’” a site document reads.

One indication of a school district’s — or any company’s or entity’s — financial health is its unrestricted net position. For L.A. Unified, it’s deep in the red: the report revealed the district has an unrestricted net deficit of $19.6 billion.

“The unrestricted net deficit reflects obligations that a district must pay out in future years using future district revenue, particularly as it relates to retiree health benefits and pension obligations for retirement plans. Unless a district sells some of its assets (e.g. buildings) the resources to pay this debt will be paid out of its operating budget that’s used for things such as teacher salaries and supplies. So, the greater the unrestricted net deficit the more dollars that will need to be diverted from classrooms and other operating expenditures in the future.”

Or, as state Sen. John Moorlach put it in an LA Daily News op-ed: It would take a $4,180 payment from every man, woman and child in the district to relieve L.A. Unified of its liabilities.

Though the state of California “is required to maintain the financial soundness of public school districts,” a $20 billion loan to L.A. Unified would “be tough to make,” Moorlach wrote. The state is anticipating a $15 billion budget surplus for the 2019-20 year, and reportedly has more than $13 billion in reserves.

While unrestricted net deficits haven’t been a central talking point during negotiations, the financial stability of L.A. Unified lies at the heart of the contract dispute. On one hand, the county has called L.A. Unified’s finances “alarming,” projecting its reserves to drop from $700 million next fall to $70.8 million in 2020-21. The union, conversely, claims L.A. Unified is hoarding money — “record-breaking” reserves nearing $2 billion — while class sizes balloon.

A teacher strike “should be avoided if it is at all possible,” the Los Angeles Times’ editorial board wrote in a Dec. 20 op-ed. “The district has nothing to gain from a strike; parents fear it, and a walkout of even a couple of weeks could be devastating to students.”

The LA Daily News’ editorial board on Dec. 31 agreed, adding that “it’s not clear what a strike would accomplish beyond showing that the union is willing to disrupt the education of Los Angeles students.” It also said UTLA is downplaying “the fiscal realities of the district and instead argu[ing] for limits on charter schools and tax increases.”

Arne Duncan, former secretary of education under President Barack Obama, addressed the potential strike in Los Angeles in a Dec. 26 op-ed for The Hill while calling on California’s Democratic state leaders — like incoming Gov. Gavin Newsom — to lead on education and increase school funding. Sacramento provides 90 percent of districts’ funding.

“Los Angeles Unified has a budget crisis” and a strike will have a deep impact on Los Angeles’ most vulnerable students, he wrote. “Only the Democratic majority in California’s capital can truly solve the financial issues. … When adults fight, it’s kids that lose.”

8 Another California district, Oakland Unified, is getting closer to striking too

A strike might not only be isolated to the state’s largest school district. The Oakland Unified School District as of late December is in the fact-finding phase after unsuccessful mediation between the district and the Oakland Education Association, according to EdSource. Oakland’s teachers union is much smaller than L.A. Unified, representing some 2,300 teachers. Teachers there are similarly calling for a salary increase and sizable cuts to class sizes.

Educators in Oakland and elsewhere have been “inspired” by UTLA’s teacher demonstrations, CALmatters reported. More than 200 teachers from a dozen local unions congregated in north Oakland on Dec. 15 — the same day UTLA held its March For Public Education — to support Los Angeles educators and strategize for more state education funding.

A rally is planned for Jan. 12 in Oakland.

Submit a Letter to the Editor