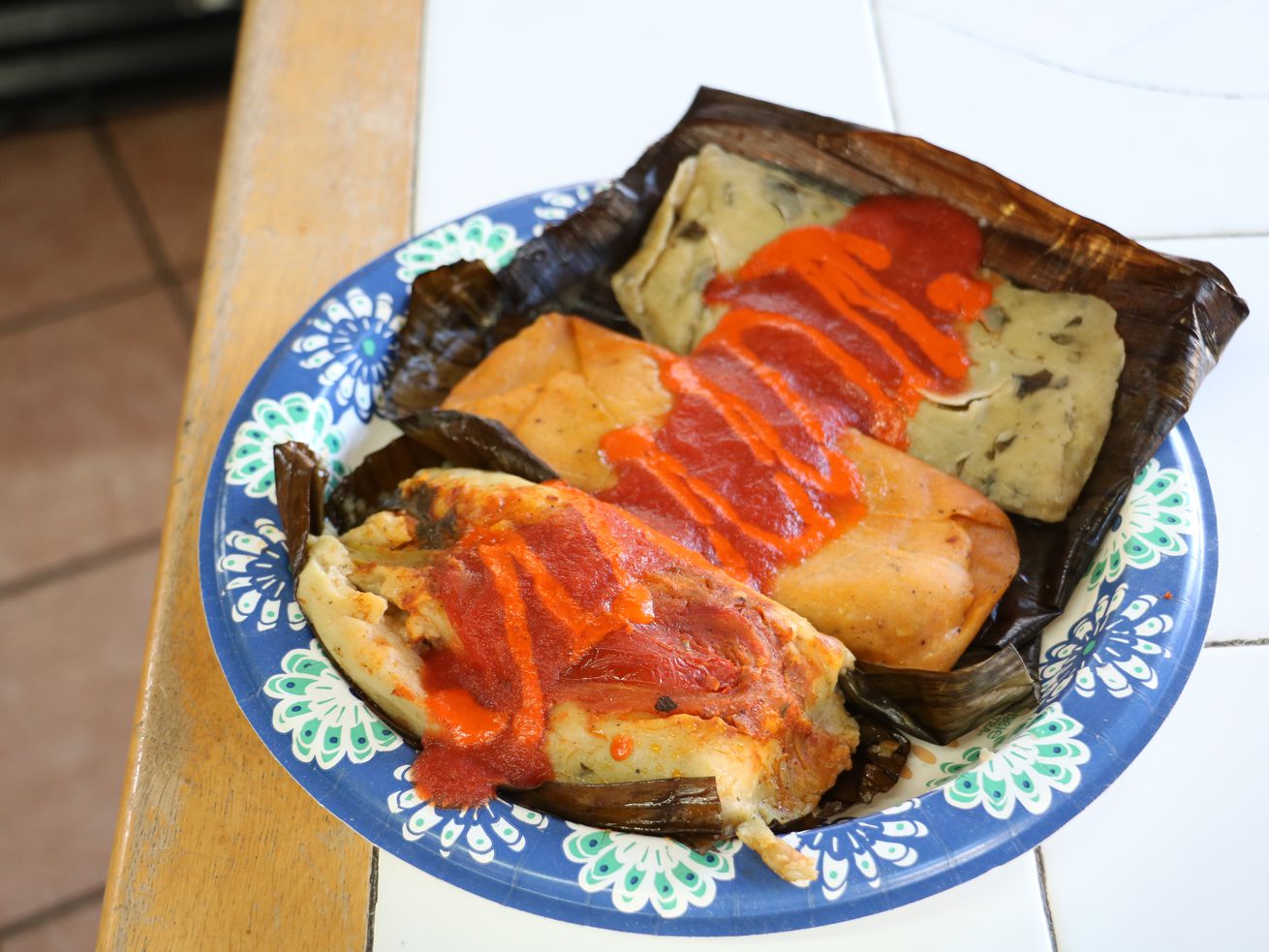 No one, I mean no one, can make better tamales that your abuela, or your tía, or your mom. In Mexican and Central American families, a multi-generational battle of tamaleras has been waged in a winner-makes-all-the- tamales contest. In my family, my abuela made all the tamales: red and green pork, sweet, and cheese with strips of chile poblano, but for those without a Mexican grandmother LA has plenty of options.

In the barrios of LA, long respected institutions such as Los 5 Puntos, LA Mascota, La Indiana and Tamara’s Tamales on the Westside, the high-season for tamales begins at the end of October with preparations for Dia de Los Muertos and ends with Dia de La Candelaria in February, with December being the busiest month.

Between the fine store bought options and various tamaleadas (incorrectly called tamaladas most of the time), or tamales-making parties, some of the best tamales you can get come from LA’s regional vendors, where artisanal practices honor traditions.

Whichever dates you observe on the Tamales Calendar, from Dia de Los Muertos (November 1-2), Thanksgiving (Latinos in the US only, 4th Thursday in November), Día de La Guadalupana (Dec. 12), Las Posadas (Dec. 16-24), Nochebuena (Chrismas Eve), New Year’s Eve, and Three Kings Day (December 2, where the one in the know gets the baby in their rosca de reyes or king’s cake slice), or finally Día de La Candelaria, these three vendors have you covered in Los Angeles.

Mexico’s Yucatán peninsula contains a variety of interesting tamales like the mucbipollo, which a tamal pie made for Hanal Pixan, the Mayan name for Dia de Los Muertos, to the tamal de Xpelón, made with local beans. Many of these tamales are made with Mayan techniques using recaudos (anatto seed pastes or achiote) as the flavor base wrapped in banana leaves as well as other leaves — in LA’s Yucatecan community, La Flor de Yucatán has been the go-to spot since 1971.

Marc and Annie Burgos make tamales yucatecos year round, from tamales tortiados (also known as vaporcitos), dzobobichay (tamal de chaya, made with chaya leaves), to the tamal colado, which is a strained masa, twice-cooked tamal, leaving a creamy, fluffy texture, filed with a pork and chicken mix with peppers in a recaudo rojo, or red anatto-seed paste. “We keep everything traditional here because the [Yucatecan] community wants us to keep the original flavors, except for the dzotobichay — we put Pepperjack cheese in there, and now people ask for it with the cheese,” said owner, Marc Burgos.

“I love my job; I love making tamales,” said Maria Luisa Esparza, who began making tamales 25 years ago in Zacualpan, Nayarit. She named the restaurant Rosy’s, a mashup of her two daughters Roxy and Roxana, and after a busy week that saw fifteen hundred tamales produced in her small tamaleria in Pacoima, she’s all smiles. Her offerings include a spicy chicken in green sauce made from jalapeños, chicken in red sauce with vegetables, pork, pineapple, sweet corn and cheese, all wrapped in corn husks.

These are recipes are passed down from Esparza’s mother, and they’re one of your best options for corn husk tamales, as many places used chile powder or canned sauces to keep their costs down. At $2 a tamal, these are a steal. “These are the same tamales I’ve been making since I was making them with my mother; nothing has changed,” added Esparza, who only serves tamales and champurrado (chocolate and maize-based drink). “We don’t make beans or rice here, none of that, purely tamales, like we did back home.”

During the month of December, the eight person squad of Tamales Elena: Maria Elena Lorenzo, Juan Irra, and their 6 daughters, Judepth, Teresa, Maria, Heidy, Nayeli, and Teresa, make around ten thousand corn husk tamales for Latinos and African-Americans in Watts, where their food truck is parked. LA’s reknowned Afro-Mexican family from Guerrero’s La Costa Chica has been making tamales for decades. From their truck you can buy inexpensive corn husk tamales they prepare for locals for a buck, as the $3 price tag for their larger, traditional banana leaf tamales doesn’t fly in Watts, but call in a special order of their Guerrero-style tamales for some of the best in LA, and they might be better than your abuela’s.

Order pork or chicken made with a special masa prepared by Maria Elena, cooked in a spicy stew of chile california and chile costeño, or their most decadent tamal — a pork head, cheek, and snout creation in a red sauce which adds an irresistible layer of fat from the glutinous cuts. “This is the tamal we prepare for New Year’s Eve,” said Teresa Irra, who had her mom make an extra one for her to eat while I picked up my order.

For Guatemalan and Salvadoran tamales, look for your Central-American friends on Instagram holding their tamaleadas and slide an order in their DM’s, or stop by MacArthur Park during the day and the popular Guatemalan Night Market after 5 p.m. I will always miss my grandmother’s tamales, and perhaps you are also without an abuela, or tired of the disappointing dry, masa bombs with skimpy fillings. It’s not a problem, because this year the highly flavorful regional tamales from Guerrero, Nayarit, and the Yucatán will keep you in the holiday spirit.