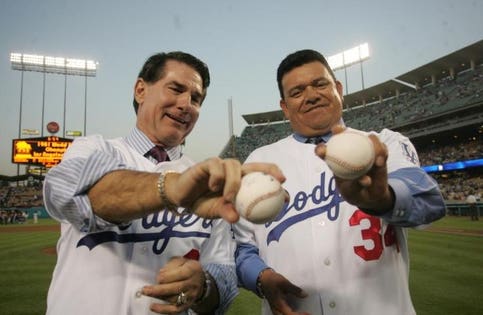 With little prompting, Vin Scully would no doubt compare the excitement of the current off-season to “watching paint dry.”

Dull off-season, you say? Try coma-inducing. The sitting around and waiting for action, for almost any sign of life from the front office has been nothing short of painful for fans in some cities, Los Angeles foremost among them. I continue to believe that the Dodgers are waiting out the market for a catcher, a second baseman and an ace-like starting pitcher. I continue to believe that Andrew Friedman will make us love him by Valentine’s Day. But while I continue to preach patience, it’s occurred to me that I may reach a breaking point with my own, and if so there will be a loud sound. And the liquid will spill from my poison pen.

Meanwhile, we can debate the worth of baseball players, and whether they or the owners have the moral high ground in this seemingly endless labor struggle, for the entirety of our adult lives. And many of us have. But the fact remains that from the beginnings of league play in the late 19th Century to December 16, 1974, when arbitrator Peter Seitz made Catfish Hunter the first agent in baseball history, no such debate could even be fathomed.

The owners said to players, essentially this: “Here’s your contract. Sign it or don’t, it’s up to you. But either way, I own you.”

There were no awful deals dragging clubs down for the better part of a decade. There was no Carl Crawford. There was no Mike Hampton. No luxury tax. Clubs got great seasons from great players at bargain rates. Always. An owner didn’t have to worry about years eight, nine and 10 for a once historically great player like Albert Pujols.

As much as any club the Dodgers have been the beneficiaries of great seasons at bargain prices, and I thought I’d take a look at some of them here. Because there are so many examples, and for my own interest (and hopefully yours), I’ve settled on but a top-10-best, and limited the examples to Los Angeles Dodgers only.

With a couple of exceptions, I used baseball-reference.com and sportrac.com for sourcing. Unable to find a figure for Steve Garvey’s 1974 MVP season, I asked him via direct message on Twitter and he responded: “I believe it was about 24K. Crazy!” I found the figure for Tommy Davis at baseball-almanac.com and the Dodgers’ extremely clutch historian Mark Langill provided the salary for Fernando Valenzuela

With all that said, here are the top 10 best salary bargains in Los Angeles Dodgers History:

2. Larry Sherry, 1959, $5700. The pitching brother to catcher Norm (also a Dodgers in 1959), Larry Sherry was a mostly-pedestrian minor league starter before finally sticking with L.A. after a start on the Fourth of July that season. He allowed two unearned runs on four hits and seven strikeouts in seven innings that day, made four more starts before bouncing back and forth between the bullpen and the rotation the rest of the way. The season numbers: 7-2, 2.19, 1.251, with 72 strikeouts in 94 1/3. And three saves.

Sherry would go on to pitch in each of the Dodgers’ World Series victories over the White Sox in 1959, saving two and winning two, including the deciding Game 6 at Comiskey Park. Los Angeles led 8-0 behind Johnny Podres, who was unable to finish the fourth inning. Sherry relieved and went the rest of the way, going 5 2/3 with no runs and four hits allowed. He even added a couple of singles and was named the World Series MVP.

You know the numbers, but here they are anyway:

Because he played in every game, including the best-of-three playoff with the Giants for the NL flag, Wills finished with the unbreakable record of 165 games. Both men recorded a WAR of 6.0.

4. Fernando Valenzuela, 1981, $42,000. Where to begin? From his Opening Day start in place of the injured Jerry Reuss, to his rookie-record eighth shutout in September, to his gutsy complete Game 3 win to turn the tide at the 1981 World Series, to everything in between, Fernando Valenzuela was, as Vin Scully called him, a “wunderkind,” a godsend, a pitcher, a glove man, a hitter and a daring base runner. And while I can picture it like it was yesterday, oh how I wish I had video of that triple.

Here are the numbers, and remember, 1981 was a work-stoppage 110-game season.

While the Opening Day start would’ve been a sellout with Reuss on the mound, the spike in attendance was profound both at Dodger Stadium and on the road for the remainder of Fernando’s starts that season. I think it’s safe to say that the revenue gained from an additional 7519 tickets sold at each of Fernando’s home starts easily paid for the young man’s salary in total.

3. Mike Piazza 1993, $126,000. Mike Piazza is the greatest hitting catcher of all time. Like, duh. And while his Hall of Fame plaque sports the cap of the New York Mets, the strongest man in SoCal’s best work was done in Los Angeles.

Here are the numbers:

The winner in complete-game fashion in two of his team’s victories in the glorious World Series sweep of the Bronx Bombers, Sandy struck out a then-record 15 Yankees in Game 1, was on the mound for the clincher — and the only home WS clincher in club history — allowed all of three hits and three walks while fanning 23, and of course, was named the series MVP.

While the context is different, the quote coming moments after the perfect game two years later, I’ll close like I opened, with Vin Scully: when Koufax “wrote his name in capital letters in the record books, that K stands out even more than O-U-FA-X.”

And remember, glove conquers all.