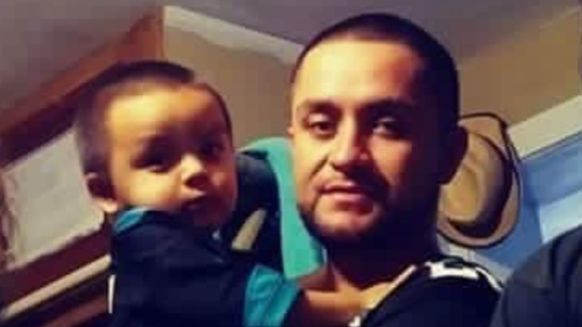 After he lost his green card following a felony conviction and was deported to Mexico, Sergio Angel Martinez Lopez thought he would never come back to the U.S.

That changed this summer after his wife was killed in a spray of bullets in a drive-by shooting, according to news reports. Martinez decided to flee with their son, not quite 2.

When he asked the U.S. for asylum in October at the San Ysidro Port of Entry, border officials told him that he would have to be separated from the younger Sergio but assured Martinez that his son would soon be united with Martinez’s mother in Jacksonville, Florida.

More than two months and one week later, the toddler is still in the federal government’s custody in Texas, Martinez said.

Locked inside Otay Mesa Detention Center, Martinez, 32, feels like he’s still being punished for the life he lived when he was younger, a lifestyle he said he left behind in the U.S.

“If they’d focused on why I came to ask for asylum, I don’t think they’d have the heart to separate me and the baby,” Martinez said.

Martinez originally came to the U.S. from Tijuana with his family when he was in elementary school, moving to Jacksonville, Florida.

By his late teens, he was getting in trouble with the police on charges related to drugs and alcohol. Then police found a gun in the car he was driving, according to immigration officials, court records and Martinez himself.

Martinez maintains that the gun was his friend’s, but it didn’t matter. He served a prison sentence and then transferred to immigration custody. He was deported in September 2014.

He returned to his hometown of Tijuana and got a job at a call center. At work, he met Glenda Siboney Gaona Zamora and fell in love.

Martinez was living with Gaona and two children — one was hers from a previous relationship — in Sánchez Taboada, one of Tijuana’s most violent neighborhoods, when they became targets of threats because of an incident that began outside their home between police and a driver, Martinez said.

The incident escalated when police entered the home, searching for a gun that wasn’t there. Martinez said he and his wife were attacked in the process, and at the end, police told the family to move for their own safety.

The couple hid in a hotel until they found a new place in El Refugio, a neighborhood in eastern Tijuana.

Martinez thought it was far enough away, but less than two weeks later, someone sprayed bullets at the family car while his wife was driving. Somehow, Martinez and the two children emerged unscathed, but Gaona was badly hurt.

He managed to get her to a hospital where she died that afternoon.

“She gave me a reason to stay there,” Martinez said. “Then all of a sudden she’s not there.”

Martinez went into hiding again, frequently switching hotels if he felt someone was watching him. He received a message with a photo of his bullet-ridden car warning him about what would come next.

He decided to apply for asylum and waited in the six-week line at the San Ysidro Port of Entry to ask the U.S. for protection.

“I would’ve never went if I had known they would take my baby away,” Martinez said.

When asked about why Martinez was separated from his child, Immigration and Customs Enforcement said its officers weren’t involved and deferred to Customs and Border Protection, which did not respond to a request for comment because of the ongoing government shutdown.

CBP Commissioner Kevin McAleenan recently told Sen. Dianne Feinstein during a congressional hearing that a parent might be separated pending prosecution for a serious criminal charge, if there is suspicion of child abuse or if the parent’s medical condition makes the parent unable to care for the child.

“They are for child welfare,” McAleenan said. “We’re talking about examples of a parent wanted for murder, a parent who’s had a stroke and needs to be taken to the emergency room. Those are the kinds of situations where children are being separated at the border.”

Though a San Diego federal judge ordered the Trump administration to reunify families, court rulings so far have made exceptions for parents with serious criminal histories.

Immigration officials have separated parents from their children in the past if the parents have enough of a criminal history that officials do not believe they can release them. Under a court ruling, children may not be held indefinitely in immigration custody. They must be released within 20 days.

With news of two children dying in immigration custody in recent weeks, Martinez is especially concerned. He calls every day to the facility in Texas that is housing his son to ask whether workers there have finished processing his mother’s application to sponsor the boy.

He’s had one video call with his son since they were separated, though he’s requested several more.

Martinez’s normally talkative and playful toddler didn’t say much as he looked at his father on the screen.

“I could see in his face that he was mad at me,” Martinez said. “Me and him were really close even when his mom was alive.”

His son celebrated his second birthday in custody.

Unaccompanied children, and those who are separated from their parents at the border, end up in custody of the Office of Refugee Resettlement until social workers can find and approve family members living in the U.S. to sponsor them.

The average amount of time a child spends in custody has almost doubled in the past two years, growing from 34 days two years ago to 60 days more recently, according to data from the Department of Health and Human Services.

Advocates have attributed at least some of this lag to a change in policy earlier this year requiring all adults living in the potential sponsor’s home to submit fingerprints which may be shared with ICE, the agency responsible for deportations.

The Department of Health and Human Services ended that policy in mid-December after the department acknowledged that it had affected how long children stayed in custody.

Martinez’s mother, Maria Niskanen, is saving money to be able to take care of the younger Sergio when he is finally released.

Martinez’s younger brother, Anthony Niskanen, 25, said he helped her with the paperwork and said the entire household completed the fingerprinting process weeks ago. They don’t know how much longer it will take.

He has listened to his mother’s weekly video chats with the younger Sergio.

“I can tell that the baby is confused. He lost his mom, and now he lost his dad,” Niskanen said. “I think they’re taking care of him. I just don’t think he’s happy.

For Martinez, the hardest part is not knowing what will happen next. He passed an interview with an asylum officer, the first step in the process to be able to stay in the U.S., but he hasn’t yet found an attorney to help him with the immigration court case.

What he wants more than anything is to be back with his son. He left two children behind in Jacksonville when he was deported.

“I already missed out on two kids’ lives,” Martinez said. “I can’t miss out on three of them.”


Mary Lehman has worked as a humanitarian volunteer abroad. Doing that in her home country felt different.

Mary Lehman has worked as a humanitarian volunteer abroad. Doing that in her home country felt different.


Tensions flared as police posted signs around Cannon Park threatening to arrest anyone who participated in a rally.

Tensions flared as police posted signs around Cannon Park threatening to arrest anyone who participated in a rally.


According to staff there, about 10 percent of the children held in Casa San Diego were separated from their parents at the border — an issue that has led to massive protests across the country. The rest arrived on their own.

According to staff there, about 10 percent of the children held in Casa San Diego were separated from their parents at the border — an issue that has led to massive protests across the country. The rest arrived on their own.

Democratic lawmakers and some Republicans in favor of a deal to protect ‘Dreamers’ want to drive a wedge between Trump and hardliners on his staff. (Oct. 9, 2017) (Sign up for our free video newsletter here http://bit.ly/2n6VKPR)

Democratic lawmakers and some Republicans in favor of a deal to protect ‘Dreamers’ want to drive a wedge between Trump and hardliners on his staff. (Oct. 9, 2017) (Sign up for our free video newsletter here http://bit.ly/2n6VKPR)