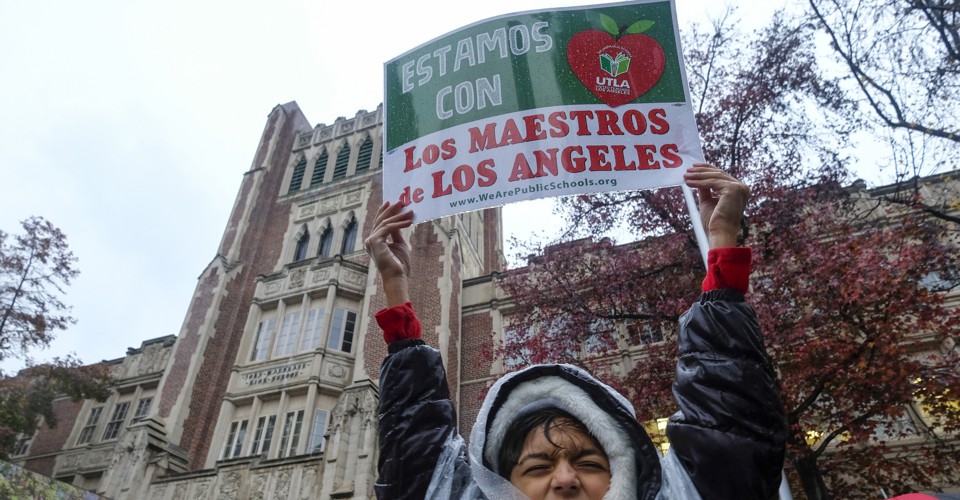 Roxana Dueñas, a 34-year-old ethnic-studies teacher at a high school in eastside L.A.’s Boyle Heights neighborhood, says her own background as an LAUSD student whose working-class parents immigrated from Mexico was a driving force behind her decision to pursue the profession. “I see myself in my students in both the literal and metaphorical sense,” she says, noting that her sister and cousins attend the school at which she teaches. (Roxana Dueñas and Rodolfo Dueñas are not related.)

This kind of synergy is rare in public education. Despite the growing emphasis in recent decades on racial inequality in the country’s school system, the share of educators of color has hardly budged, growing just a few percentage points over the past three decades, according to an analysis by the Albert Shanker Institute. Research shows that the problem isn’t uneven recruitment of educators but rather uneven attrition: Teachers of color leave the profession at a higher rate than their white counterparts—a trend that’s particularly pronounced among black educators, whose share of the teaching force has declined. According to the Shanker Institute report, teachers of color tend to be concentrated in urban schools serving high-poverty, minority communities, where the working conditions—often, a limited say in decision-making and lack of professional autonomy in the classroom—eventually burn them out. This is one force driving the teacher shortages seen in parts of the country.

The Shanker Institute report highlights Los Angeles as an outlier, because so many of its teachers are Latino. Following nine cities—including Chicago, New York, and Washington, D.C.—over a decade, the report found that despite significant upticks in the Latino-student population, the share of Latino educators overall grew modestly at best but generally remained stable. Los Angeles was the only city that saw a sizable uptick in the share of Latino educators. In fact, turnover rates were lowest for LAUSD’s Latino teachers—with three in 10 of them leaving the profession after three years, compared with four in 10 of their white, black, and Asian counterparts.

But Monday’s walkout demonstrates that LAUSD may not keep up these retention rates for long. Not only have LAUSD’s teachers been working without a contract for more than a year, they argue that they’ve also struggled with a decade of budget cuts that have chipped away at school resources and made it nearly impossible to serve their students adequately. Some classes now have as many as 46 students, surpassing the 39-student limit the teachers’ previous contract stipulated. Meanwhile, many LAUSD schools lack full-time librarians and nurses.

“You’re working in these conditions committed to the students because you get satisfaction knowing you’re making a difference,” says Martha Infante Thorpe, a 48-year-old social-studies teacher who’s joining the strike. Infante Thorpe taught at a high school in South Central L.A. for more than two decades but recently moved and now teaches at a school in a middle-class community, a transition that’s exposed her to just how uneven public-school resources can be. “Then you come to this point when you realize that people are taking advantage of your kind and altruistic nature.”