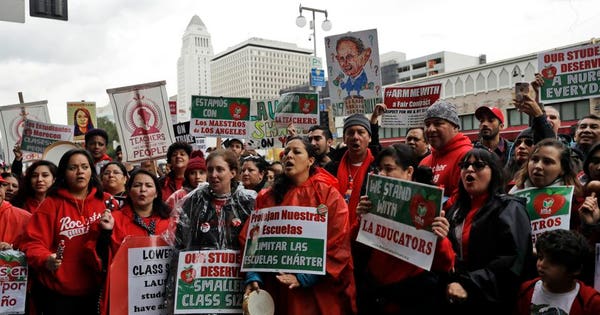 On Monday, the United Teachers Los Angeles (UTLA) went on strike in Los Angeles Unified School District (LAUSD), the nation’s second-largest school system. Schools remained open, but were staffed by a skeleton crew of substitutes while thousands of students stayed home. The strike is the nation’s largest teacher strike in decades. The big issues are pay, class size, and staffing.

Last week, LAUSD, which serves over 600,000 students, proposed an immediate six-percent salary increase for teachers (with half of it retroactive to 2017, and the other half retroactive to 2018), as well as a promise to cap class sizes to 35 students in grades 4-6 and 39 in middle school and high school math and English. UTLA president Alex Caputo-Pearl termed the proposal “woefully inadequate,” and announced that his 32,000 members were walking off the job because they were “in a fight for the soul of public education.”

The UTLA has demanded a 6.5 percent pay increase, retroactive to 2016, and that LAUSD pull from $1.86 billion in reserves to increase staffing. In response, LA Superintendent Austin Beutner has insisted that’s not a viable option, but last Friday issued a proposal that would bring about 1,200 more staff into schools.

In addition to its meat-and-potatoes demands, the UTLA has vocally denounced the “privatization” of education and the expansion of charter schooling. In California, charter school enrollment has grown by more than 25,000 students over the past decade, and LA has seen an exceptionally large increase, with enrollment up more than 35 percent since 2012–13. Last month, UTLA called for an “immediate cap” on charter school growth in LAUSD, calling for an end to “the unsustainable, destructive practice of unregulated charter school growth.”

The LA strike follows a series of statewide walkouts last spring across a series of red and purple states like West Virginia, Oklahoma, and Arizona. In those cases, teachers consistently came away with big wins, racking up substantial pay increases and adulatory media coverage. So, what’s the deal with LA, and how does the situation compare to what unfolded last spring?

When it comes to the UTLA’s salary demands, note that that the starting point in LA is very different from that in places like West Virginia and Oklahoma. In those states, teachers were among the worst-paid in the nation, with average teacher pay in the $40,000s. In LAUSD, according to the California Department of Education, average pay is $74,789. Indeed, California teachers rank second nationally in teacher pay, at $79,128 a year (the National Education Association reports that average pay, across the U.S., is $59,660). For those who would point to California’s sky-high cost of living, it’s worth noting that California’s median household income in 2017 was $71,805—which means the typical LA teacher earns more than the median California household.

On the class size question, the most recent federal data (from 2014–15) notes that average class size in LAUSD was 25.3, a hair lower than the 25.4 found across the state of California, as a whole. Nonetheless, the UTLA’s interest in putting a cap on extraordinarily large classes is easy to appreciate. No parent or teacher likes to see a class that large. It is worth keeping in mind, though, that such classes are the exception and, more relevant, that the waiver which permits those extraordinarily large classes was negotiated into contracts with UTLA more than 15 years ago, and signed off by the last five UTLA presidents. So, while pushing to eliminate the waiver that permits those giant classes is wholly reasonable, it’s misleading for the UTLA to suggest this is a new practice and peculiar that the union has suddenly decided this long-accepted provision helps to justify a strike.

For all the commentary decrying the financial plight of California schools, they’re pretty much in the middle of the pack when it comes to funding. The most recent National Education Association data ranks California 32nd in the nation in per-pupil spending, at $11,159 per student (based on average daily attendance). The California Department of Education reports that LAUSD spends $13,452 per student. While many states and cities spend substantially more, these are not penurious amounts. As for enrollment, LAUSD has seen a modest but steady decrease in recent years. Since 2013–14, for instance, the district has seen enrollment slip about five percent, from 654,000 to 621,000. LAUSD is projected to lose another 80,000-plus students over the next decade. While the UTLA can try to blame charters for all of this, as if parents choosing a charter school is some insidious phenomenon, the reality is that half or more of it is driven by demographics.

Whatever the complexities, the reality is that teachers have a legitimate gripe. Between 1992 and 2014, for instance, California teacher salaries increased just six percent after adjusting for inflation, even as the state’s per pupil spending went up at more than four times that rate. Over that same period, California student enrollment grew by 24 percent—but the state added non-teaching staff at twice that rate. In other words, a big part of the story here is not necessarily a lack of funds, but how those funds have been spent.

One underappreciated piece of the puzzle is the degree to which benefit costs and pension obligations in California and LAUSD have consumed funds that might otherwise be spent on staffing, instruction, and teacher salaries. As Bellwether Education’s Chad Aldeman, California teachers could pocket an immediate $10,250 (or 14.6 percent) pay boost if it weren’t for the states massive pension debt. AEI’s Nat Malkus has projected that, by 2021, LAUSD benefits spending will consume up to a third of the district’s funds—and half of all funds by 2031.

Now, all that said, there are some intriguing differences with last year’s strikes, ones that may place the LA teachers in a weaker public position than the one enjoyed by their red-state brethren last spring.

Whereas last year’s walkouts received fawning local and national media coverage, the LA action has not enjoyed the same kind of reflexive support, locally or nationally, that greeted last year’s strikes. For instance, the editorials in the LA Times and the LA Daily News were anything but smarmy.

While last year’s red-state walkouts were statewide, grassroots efforts that operated largely outside the contours of the union, the LA strike is a more conventional union action—and thus provides an easier target for critics and is more readily depicted as the handiwork of conventional union politics.

Moreover, last year’s job actions mostly occurred in states where teacher strikes are illegal, meaning that schools were closed by superintendents eager to minimize disruptions. In LA, though, schools are remaining open in LA and operating with skeleton crews of substitute teachers—meaning the resulting disruptions may be traced more directly to teachers.

And the UTLA leadership isn’t doing itself many favors. UTLA president Alex Caputo-Pearl can’t seem to help himself, as he keeps trampling on the kitchen-table concerns (which proved so effective last year) with sweeping “education wars” broadsides about charter schools being “operated mostly by corporate chains” and “draining more than $600 million from non-charter schools every year.” Caputo-Pearl has also described LA Superintendent Beutner as offering the “privatizers’ perspective, which is to downsize the public school district and continue to accelerate privatization.”

All of this suggests that LA teachers may find themselves on weaker footing than they anticipated. At the same time, there is a reasonable deal to be done here. After all, it’s easy to sympathize in broad strokes with teachers’ demands. Nobody is eager to defend 38-student classes of fourth graders. Everyone can sympathize with the case to pay hard-working teachers more and with the value of adding more school nurses.

But last year’s teacher walkouts were a case of sorely underpaid professionals making a grassroots, kitchen table case for higher pay. The LA fight involves union leaders, representing reasonably well-paid teachers, arguing for a substantial retroactive pay bump, in language that’s draped in sweeping rhetoric about “corporatism” and “privatization.” That may work out, especially in deep-blue California, but it’s a very different kind of strike, and one that eschews the practicality that marked last year’s wins.