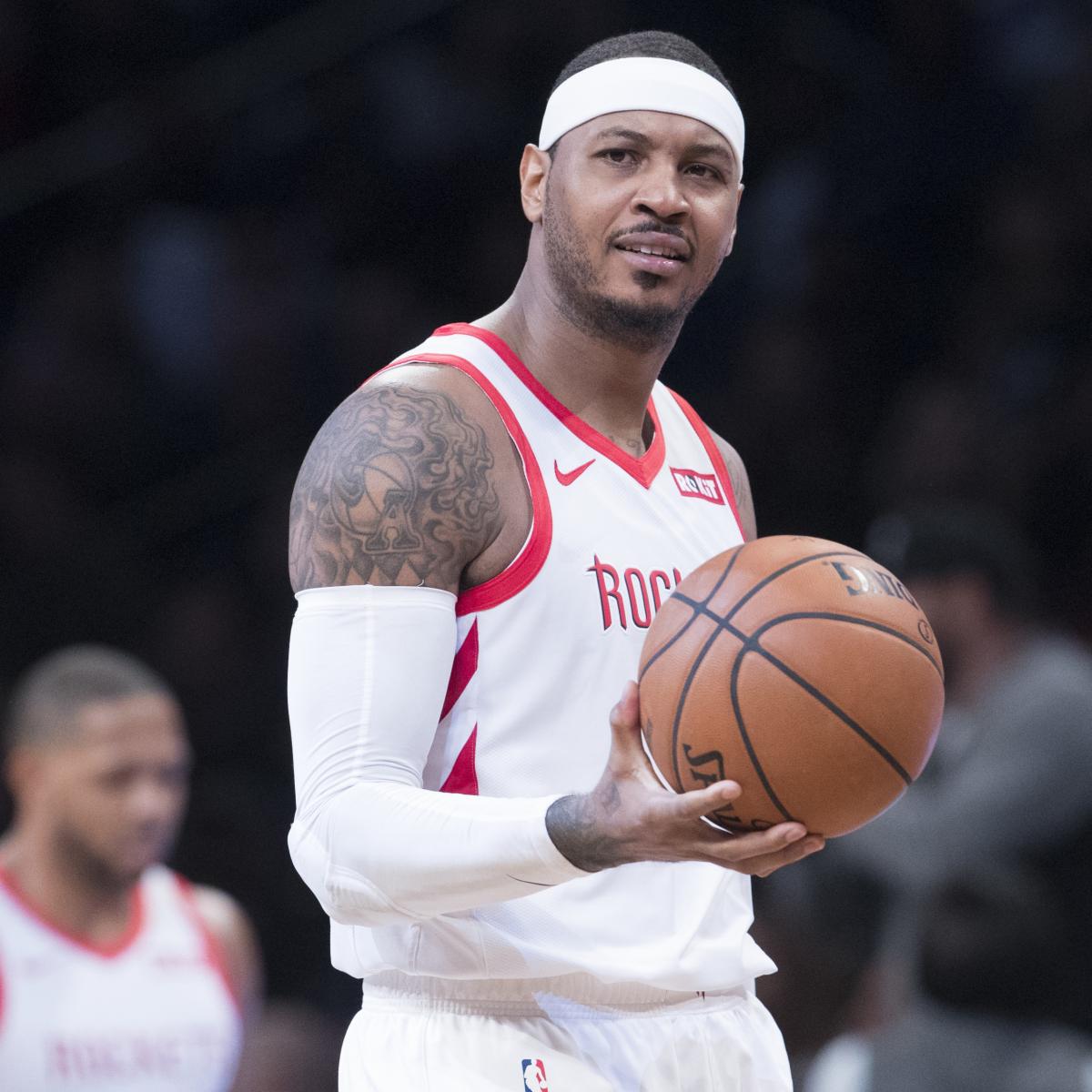 LOS ANGELES — After an unsuccessful stint with the Houston Rockets, 34-year-old veteran Carmelo Anthony will be traded to the Chicago Bulls on Tuesday, per ESPN’s Adrian Wojnarowski, largely for tax savings.

Around the league, the question immediately became: Should the Los Angeles Lakers pursue the 10-time All-Star and friend of LeBron James?

Anthony previously joined another friend, Chris Paul, with the Rockets, but lasted 10 games before general manager Daryl Morey exiled Anthony for over two months before he shipped him to the Bulls. Chicago will either cut him quickly or look to trade his $2.4 million minimum contract (the Oklahoma City Thunder previously dumped Anthony in an offseason deal to the Atlanta Hawks, who are still paying the forward $25.5 million on a contract buyout).

If so many teams are uninterested in Anthony’s services, why would the Lakers want him?

“I think it would be great to have Carmelo Anthony be on the Lakers. I believe Melo can still play the game. I believe I can help Melo,” James told ESPN in late December. “I know Melo better than Melo knows himself at times, and vice versa. So if the opportunity presents itself I would welcome it.”

Well, that opportunity may indeed be here. In simple terms, if James wants something to happen, the Lakers will do what they can to oblige.

Sources: The Lakers maintain interest in Anthony, but do not want to waive a guaranteed player to create a roster spot for him, league sources tell ESPN. If a roster spot eventually opens with LA, yes, the Lakers are a possible destination for Anthony.

The bigger issue is timing. The Feb. 7 trade deadline is just over two weeks away. The Lakers, under president Earvin “Magic” Johnson, have made midseason deals the last two years, sending out Lou Williams in 2017 and both Larry Nance Jr. and Jordan Clarkson last February.

Anthony will probably need to be patient just a little longer. Los Angeles has 15 guaranteed contracts, and none of those players are expendable in a buyout.

Veterans Tyson Chandler, JaVale McGee and Lance Stephenson are producing in the rotation. Michael Beasley is averaging 10.6 points in just 13.2 minutes over the last 10 games. Rajon Rondo has missed much of the season with two separate hand injuries, but the Lakers seem to value the veteran point guard’s leadership skills.

Los Angeles spent $1.5 million in the draft to trade for second-round pick Isaac Bonga, who’s developing in the G League. Shooter Svi Mykhailiuk is an increasingly important rotation player, and Ivica Zubac was the difference-maker in huge wins over the Golden State Warriors and Thunder earlier this season. Johnson wouldn’t cut the player he selected with the 25th pick in last June’s NBA draft in seldom-used forward Mo Wagner.

Of course, a few or all could be available in trade, even some of the team’s young core of Brandon Ingram, Kyle Kuzma, Josh Hart and Lonzo Ball—but then it depends on the return. If the New Orleans Pelicans are willing to shop Anthony Davis over worries he’ll leave in free agency after next year, the Lakers will happily talk.

That’s where Anthony may get his opportunity to join James and the Lakers. If the team sends out multiple players in a blockbuster deal, Los Angeles will need to fill roster spots.

Will the Washington Wizards trade Bradley Beal? B/R’s Ken Berger recently dove deep into the possibility. If a deal can happen, the Lakers need to at least consider making a run at the All-Star guard.

Earlier in the season, Los Angeles tried to acquire Trevor Ariza from the Phoenix Suns with Kentavious Caldwell-Pope as bait. Ultimately, the Suns sent him to Washington, and Caldwell-Pope eventually supplanted Hart in the Lakers’ starting lineup. He could be made available once again, and his $12 million expiring contract is potentially vital for salary matching.

Caldwell-Pope can veto any trade, but he shares an agent with James in Rich Paul of Klutch Sports, so the odds are high Caldwell-Pope won’t be an obstacle.

Again, it comes down to James, which is why there’s a reasonable chance Anthony will end up on the Lakers. From a basketball perspective, Anthony is an older version of the same natural-born scorer who never seemed to put nearly as much effort into defending.

The Lakers offense has sputtered recently, which will happen when players like James (groin), Rondo and now Ball (out at least four to six weeks after a significant ankle sprain) aren’t in uniform. The team (25-23) has survived on its defense, which will fall off without Ball’s versatility and energy. Perhaps an offensive boost from Anthony would help. Yet Beasley has filled that role extremely well this month.

Of course, Beasley’s $3.5 million expiring salary could be a necessary sacrifice in a bigger trade, if the Lakers can find a deal.

James seems to believe Anthony has more to give, and making James happy would be the primary benefit of bringing in the veteran forward. Anthony may help on the court, too, but that’s probably not the driving force in why the Lakers would pursue him.

Both James and Rondo should be back on the court shortly, and Johnson would like nothing more than to land James a true second star to help the franchise compete for another championship.

If the Lakers can shake the NBA landscape before the trade deadline, expect Anthony to sign soon after.