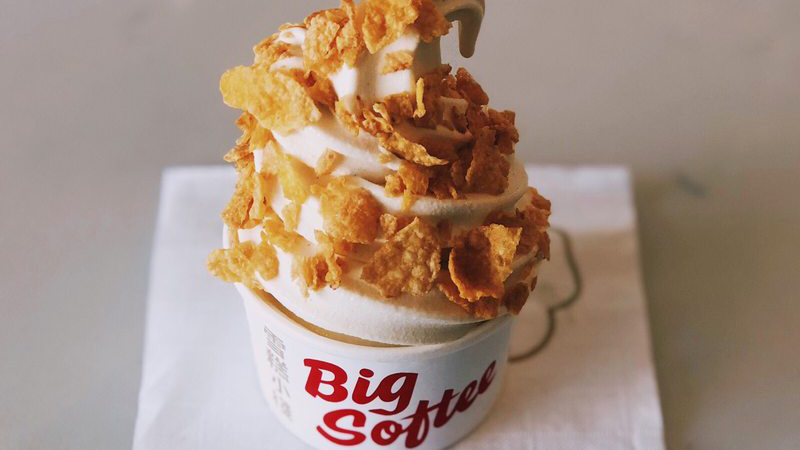 Think about the platonic ideal of an ice cream shop and the flavors you can always expect. Are you picturing chocolate? Strawberry? Sprinkle-topped scoops of vanilla piled high on a cake cone? We’re guessing your mind didn’t go straight to kabocha squash.

“You probably think that mostly because you grew up here in the United States, but maybe you’re in a neighborhood where people didn’t grow up here,” says Angelino Baltazar, the chef behind the flavors at Big Softee. “Maybe they grew up in Hong Kong, and nostalgia for them is totally different; so when we started talking about [opening] a neighborhood ice cream shop, we really thought about the neighborhood.”

Tucked into a green-shingled strip mall in the heart of Monterey Park, Big Softee is playing to the neighborhood—and to anyone else who wants a taste of some of L.A.’s best soft serve. For homesick Chinese residents, Asian-Americans raised on black sesame and fresh tofu, Americans who want to think outside the ice-cream box and anyone else intrigued by the sound of mochi as a topping, the machines of this tiny soft-serve spot churn and swirl some of the most inventive flavors in town.

Many of Big Softee’s options take their inspiration from Hong Kong: The tofu flower—one of our favorite bites of 2018—is modeled after the traditional dim sum dessert. Baltazar spent a lot of time with ginger and honey to nail the blend, and gets the tofu and soy milk fresh two or three times a week. It’s treated almost as a sorbet base—to make a totally vegan flavor—with fresh ginger juice added at the last moment. The result? A light, floral soft serve that’s unlike any other.

For the Hong Kong milk tea flavor, in lieu of using powder, the team imports tea from Sri Lanka. Milk tea often incorporates four or five types of tea, plus evaporated milk and condensed milk; most restaurants will steep the leaves in milk, but there are fats and sugars resilient to making the tea steep strong enough. At Big Softee, Baltazar reverse-engineered the process for flavor that’s a creamy, fully-steeped take on the classic drink.

“Because we have such a specific audience and a specific sandbox to play with, it gives us a really cool set of ideas to work around,” he says. “It’s been fun. We work with ingredients where there’s nobody else who’d be finding or using them.”

There are sweet-savory furikake waffle cones, chocolate-and-tofu milkshakes, affogatos, hojicha teas and even an off-menu fresh soft tofu that’s set with white chocolate and brûléed. Soft-serve flavors rotate every few weeks, with attention given to Chinese holidays. (Our advice? Get in for the salted egg custard flavor before the Chinese New Year celebrations end.)

And because this is a blend of Hong Kong, American and Asian-American culture, you can bet there are sundaes.

“The history of ice cream isn’t really Chinese, so there aren’t as many sundaes [in China],” Baltazar says. “But America has tons of sundaes—like the banana split came from a pharmacy, and so did the tin roof.”

As such, lines form for Big Softee’s unique spins: The Jefferson is red bean ice, like you might find in Hong Kong cafés, but here topped with soft-serve, while the butter-mochi sundae involves pineapple, toasted coconut and toasted macadamia nuts—like their take on a brownie sundae, but with mochi.

The shop opened last summer, but at the rate it’s been going, we can’t wait to see what’s in store for this year’s flavors. Within the first week of 2019 alone, Baltazar launched a handful of new toppings like kuromitsu, a Japanese black sugar syrup; blondies; sesame caramel; and nama chocolates made with white chocolate and matcha. Sometime this year, Baltazar hopes to incorporate Sichuan peppercorns, peanuts and slow-roasted strawberries.

“It’s our first year so we’re still trying to figure it out,” Baltazar says. “We just wanted it to feel like a classic, like it’s been around forever.” We’d say that’s a big “mission accomplished,” regardless of your own flavor of nostalgia.

Big Softee is located at 128 S Atlantic Blvd in Monterey Park, and is open Wednesday and Thursday from 3 to 9pm, and on Friday, Saturday and Sunday from 1 to 10pm.