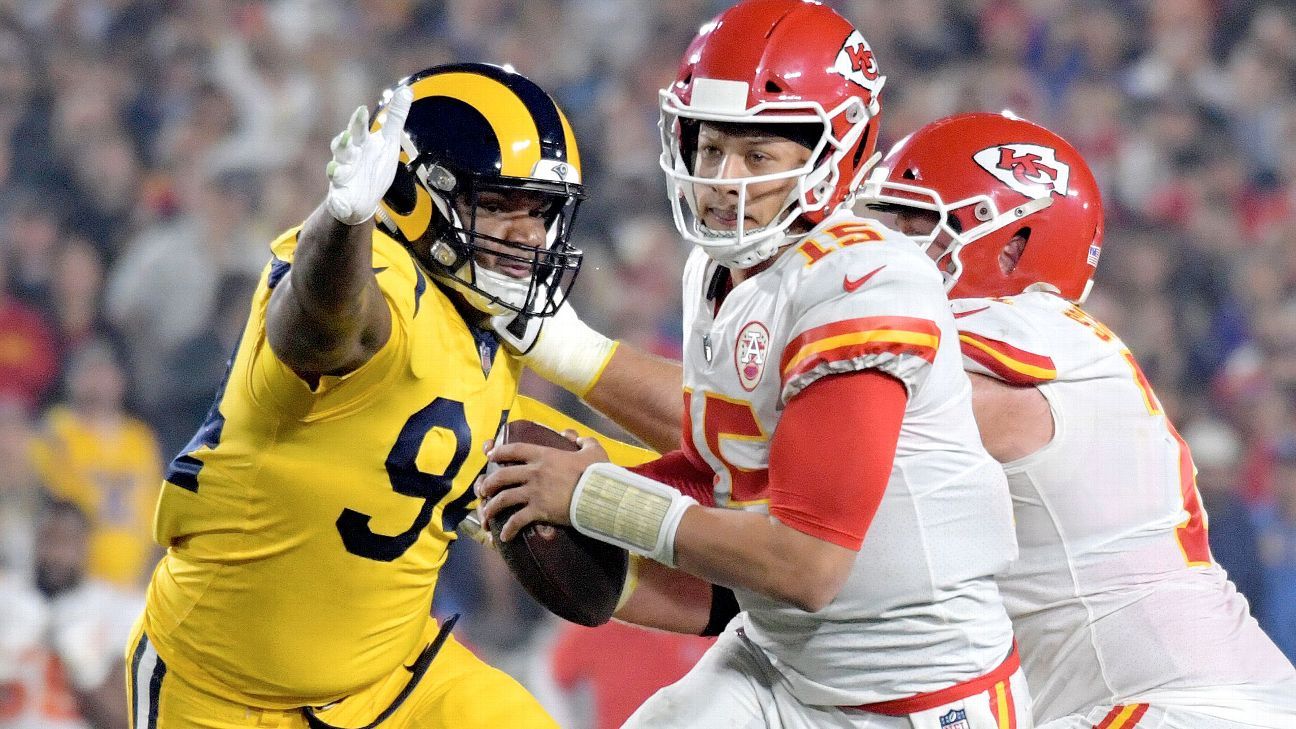 The Los Angeles Rams‘ rookie class: We hardly got to know you. The Rams built their 2018 roster to win this season, and develop their rookies for later. Rams rookies played only 573 snaps on offense and defense, the fewest in the NFL — by far. For comparison’s sake, the Indianapolis Colts rookies played almost 5,000 snaps.

Despite a small sample size, it was evident that the Rams made a few promising selections, even without a first-round pick. Here’s a look at the Rams’ 2018 draft class:

Best rookie: Defensive end John Franklin-Myers, a fourth-round pick from Stephen F. Austin, appeared in all 16 games and played 283 snaps, the most by any Rams rookie.

Franklin-Myers was utilized in four-man rush packages, third downs and some two-minute situations. “You could always see the raw athleticism, the talent, he’s got great length, got just a natural feel for how to work edges on people,” Rams coach Sean McVay said

Franklin-Myers made a game-changing play in a Week 4 win over the Minnesota Vikings, when he forced Kirk Cousins to fumble late in the game, helping to secure a Rams victory.

“There’s still a lot of room for growth,” McVay said.

Most improved rookie: Offensive lineman Joseph Noteboom, a third-round pick from TCU, played his most meaningful minutes of the season in Week 17, when he was inserted at left tackle for Andrew Whitworth, who was sidelined in the second quarter.

“He protected really well,” McVay said. “He had a good understanding of what we’re trying to get done in the run game.”

Noteboom played only 77 snaps on offense (More than 60 percent of those in the regular-season finale), but demonstrated an ability to play guard and tackle. His continued development will be critical to an aging line.

Jury is still out on …: The majority of the draft class. The rookies, outside of Franklin-Myers and Noteboom, did not play a large enough role to evaluate who can be relied on as a significant contributor going forward.

On offense, Noteboom could be needed to start next season because of the expiring contract of left guard Rodger Saffold, and it’s possible center/guard Brian Allen also will need to contribute as Whitworth and center John Sullivan age. Running back John Kelly gained meaningful experience in the final three games but must demonstrate an improved ability in pass protection if he wants to back up Todd Gurley.

On defense, a permanent solution must be found at outside linebacker with Dante Fowler‘s contract expiring. Ogbo Okoronkwo, considered a nice pickup in the fifth round from Oklahoma, never worked his way into the lineup after he underwent offseason foot surgery. The development of tackle Sebastian Joseph-Day, a sixth-round pick from Rutgers, will also be interesting to monitor since Ndamukong Suh played on a one-year deal.

Undrafted rookie evaluation: The receiving corps was hit by injuries early in the season when backups Pharoh Cooper and Michael Thomas were put on injured reserve, providing an opportunity for KhaDarel Hodge to be activated from the practice squad. Hodge, from Prairie View A&M, played in 14 games, with his primary role on special teams. He did, however, play 84 snaps on offense and caught two passes for 17 yards.