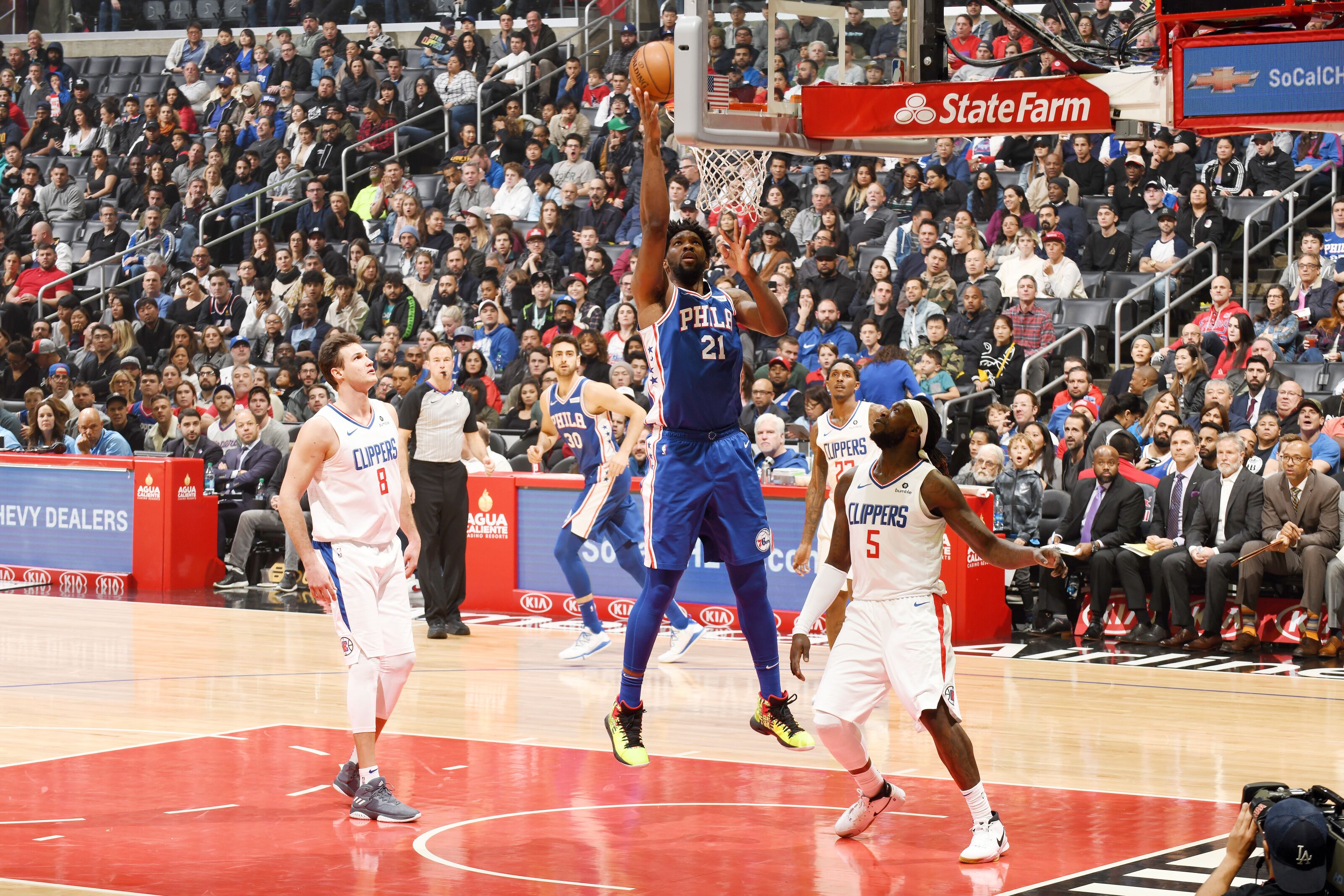 The Philadelphia 76ers rebounded from Sunday’s blowout loss with a road win in Los Angeles.

It’s 2019 and the Philadelphia 76ers are undefeated in the new year, beating the Los Angeles Clippers 119-113 for a hard-fought road win. Joel Embiid was once again the Sixers’ standout, returning from a one-game absence and producing at a high level.

The first half belonged to Philadelphia, with Embiid putting up 15 points in the first quarter alone. He would finish the half with 19 points, while J.J. Redick trailed shortly behind with 16. The Sixers were up 76-58 after two, marking the team’s highest-scoring half this season.

In the second half, things got a bit more interesting. The third quarter was mostly back and forth, but the Clippers managed to trim the lead to 13. The primary storyline, however, doesn’t relate to the actual basketball game.

Early in the quarter, Embiid and Ben Simmons got tied up on a rebound, with the latter making incidental contact with JoJo’s face. Embiid made an audible (and NSFW) complaint to the bench, upset with Simmons fighting for a rebound. Some, naturally, are viewing it through the lens of stat-padding.

Brett Brown said after the game Embiid’s reaction was out of “frustration and fear,” citing last season’s facial injury.

The Clippers got strong production from multiple players in the second half, with Danilo Gallinari standing out in the third quarter. Finally healthy, his versatile scoring and skill level shine in the L.A. offense.

In the fourth, things got both chippy and tight. The Sixers saw their lead drop to as low as four, with a couple scuffles providing in-game fireworks. First, it was Embiid and Patrick Beverley exchanging words after the big man was fouled. Then Jimmy Butler and Avery Bradley got into a light shoving match, leading to double ejections a few minutes later.

Philadelphia’s offense stalled late, with Simmons struggling to produce in the final minutes. Embiid hit some big shots, but the Sixers rely too heavily on Embiid when Butler (who was ejected) isn’t there to generate isolation buckets.

After several ugly misses, Simmons got redemption to an extent, hitting a tough righty floater with under one minute left. That extended the lead to seven. He would also put the proverbial nail in the coffin, inbounding the ball off Sindarius Thornwell’s back and throwing down an uncontested slam to give Philadelphia the final six-point margin.

Embiid looked good after missing last game with knee soreness, scoring 15 points in the first quarter and quickly leading the Sixers to a sizable advantage. Things faltered a bit in the second half, but he managed to keep the Sixers afloat without Butler late in the fourth quarter. A few big shots and defensive possessions were instrumental in the victory, even with Montrezl Harrell‘s late-game heroics.

Simmons was excellent in the first two quarters, activity distributing the ball and putting us on early triple-double watch. He once again struggled in the final frame, though, clanking multiple shots at the rim and missing some key free throws, albeit they were inevitably inconsequential. He made up ground with two game-sealing buckets in the final minute.

Redick was a non-factor in the second half, scoring just two points over the final two frames. He still played a big role in building the Sixers’ 18-point halftime lead, hitting multiple high-difficulty shots and working the dynamic two-man game with Embiid. It’s his second solid showing in three games.

McConnell was electric in the first half, nabbing several steals and imposing his will on defense. While offensive and physical limitations continue to cap his impact, McConnell’s basketball I.Q. and effort are two things Brett Brown can lean on. He finished the game with Butler in the locker room.

This was the best game of Jonah Bolden‘s young career. He hit all four field goal attempts (including his lone three-pointer), grabbed five offensive rebounds, and was impactful on defense without fouling in excess. There will be natural ups and downs for the rookie, but his two-way impact should push Brett Brown to get him more consistent playing time.

The Clippers are a deep team with several talented pieces. Montrezl Harrell, on multiple occasions, got the best of Embiid late in the final frame. His effort on both ends stood out, highlighting his Sixth Man of the Year candidacy in the process.

After getting slaughtered by Portland on Sunday, the Sixers got a nice bounce-back win on the road. The Embiid-Simmons moment and fourth-quarter collapse weren’t ideal, but the Sixers still got the dub, advancing to 24-14 on the season.

This was the first half of a back-to-back, as the Sixers will tip off at 9 PM E.T. tomorrow night in Phoenix.