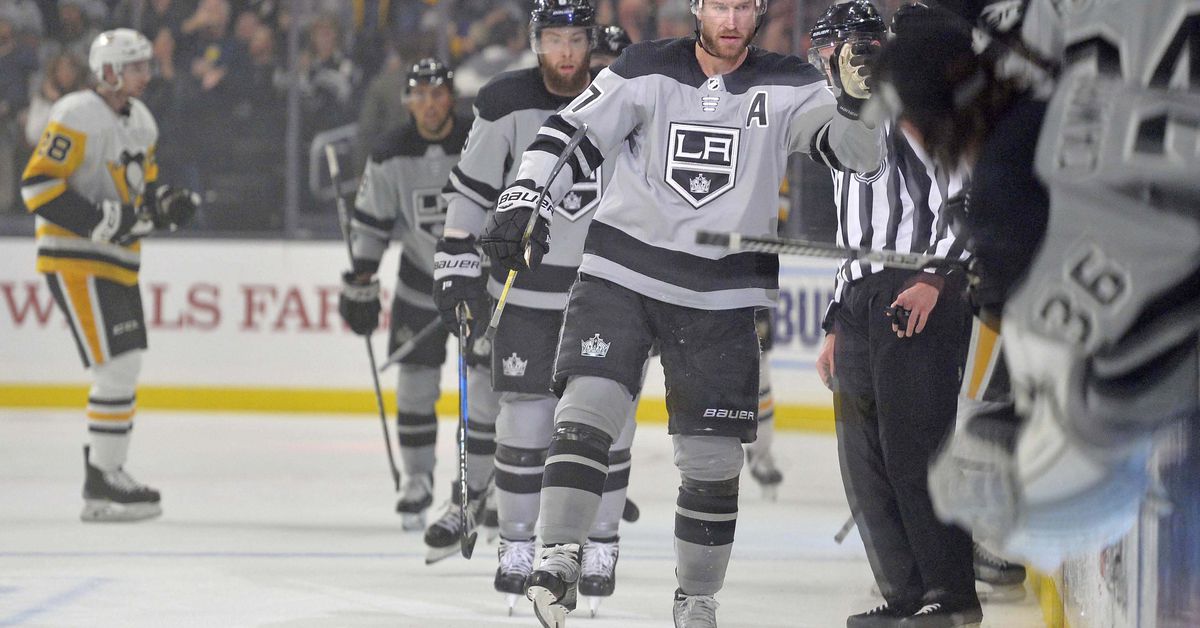 It’s Star Wars Night at Staples Center and all the villains are here: Darth Vader, Stormtroopers, Darth Maul, and Sidney Crosby and the Pittsburgh Penguins. The Pens are on the second night of a Southern California back-to-backer. On Friday, the Pens spotted Anaheim a 3-0 lead before eviscerating the Ducks 7-4, including four third period goals. On Thursday, the Kings hosted what was the worst team in the league (Ottawa) before giving up with 36 minutes left in the game and losing 4-1. Kyle Clifford called the game an embarrassment while Willie Desjardins said the team didn’t give up. (Whatever Willie!) Tonight, most of us are just hoping the Kings bring some semblance of energy.

Snoop Dogg is in the house tonight serving up celebrity DJ duties. Here’s his set list:

Drop It Like It’s Hot
Jump Around
This Is How We Do It
I Love L.A.
Nuthin But A G Thang
Come On Feel The Noise
Roxanne

Tanner Pearson returns to Staples Center tonight, which means there will be some wet eyes as the Kings play a tribute video like only they can. Jonathan Quick starts in net and the Pens counter with some guy named DeSmith. So, are you saying the Kings have a chance?

(Upon further review, Casey DeSmith sorts some impressive numbers—12-7-0 record with a 2.47 goals agains and a .924 save percentage.)

4:17—Evgeni Malkin to the box for slashing. Kings to the power play. That makes me nervous in a hurry. Will there be a shorthander? Should we just decline the penalty? Will Willie send out four forwards and a D-man on the power play? Will Drew Doughty get tackled and be sent to the box somehow to cancel out the power play? So many possibilities here.

5:30—And just like that, the power play goes sour as Jake Guentzel nets his 22nd off a 2-on-1 rush with Sidney Crosby. Dammit it all! Goodness gracious sakes alive! Damn the torpedoes! Why in the hell does Willie D. continue to send out four forwards and one defenseman on the power play? IT DOESN’T WORK! YOU GIVE UP ODD MAN RUSHES WITH THAT CONFIGURATION OUT THERE! That was the eighth shorthanded goal the Kings have given up this year. So frustrating to watch this play out the same exact way, every game, every power play.

7:48—There it is…the Pearson Tribute. Standing ovation from the Staples faithful. Smiles and friendly waves to the fans from the father-to-be. Nice moment from one-third of our beloved 70s Line. Class move by the Kings as always.

10:58—We flashback to 2016-17 when Jeff Carter was a monster, battling Sidney Crosby for the Rocket Richard Trophy fairly late into the season. Carter with the steal and he tees up a slapshot that DeSmith never saw. I’m fairly emotional seeing the brilliance of Carter we haven’t seen all year.

Do you know what would have been really great on that vintage Carter goal? If the referees wouldn’t have swallowed their whistles on that extremely late hit from former King Jack Johnson after the red lights went on. That being said, maybe it’s better that the Kings didn’t go back on the power play.

16:26—Uh-uh. Kings back on the power play. What horrors will this man advantage produce?

18:26—Power play over and even Snoop Dogg is upset about the lack of shooting and organization on that power play. Simply horrid. On the bright side, the Kings didn’t give up one the other way. There’s always a silver lining, amirite?!

Kings with the great energy period. If only Willie D. worked on special teams in practice. Just imagine.

7:44—The TV timeout gives us a chance to catch our breath. It’s been a good period. One where you don’t wonder aloud why you’re wasting your time and/or money watching this game. We’ve seen end-to-end rushes, a Doughty-Crosby one-on-one battle, some wild sequences with brilliant saves on both ends, a Carter injury scare, a missed rebound chance by Tyler Toffoli, and some great Quick leather action:

8:47—Carter calls “bank” smacking a sweet pass from behind the net off Alex Iafallo and into the net. That’s Iafallo’s first goal since moving to the second line. Nice to have you back on the scoresheet, Alex.

9:37—Doughty gets mugged in the right wing corner by a combo Crosby elbow/high stick, crumples to the ice, and pleas to the referee why there was no call.

As we covered in the last running diary, the zebras are not in love with you this year. Sorry, bruh.

11:33—Not a great game for the Pens’ Marcus Pettersson. First Carter worked him in the first, stealing the puck and scoring unassisted, and not Matt Luff gets the better of him on a behind-the-net scrum.

14:41—Doughty to the box for interference against Crosby during an extended Pens offensive zone cycle. If this stat doesn’t make you sick, then nothing will: Pittsburgh leads the league with a 34.5 road power play percentage.

16:05—Carter with another steal, leads the 2-on-1 break, and it’s Anze Kopitar who gets stuffed by DeSmith. But Kopitar doesn’t give up, getting to his rebound, picking the corner to convert the shorty! Vintage Carter with two takeaways and three points! Everything feels right in Los Angeles tonight.

Where has this Kings team been all year?

00:49—Ilya Kovalchuk uses the force with a no-look redirection to Brendan Leipsic who converts for his first goal since December 6th.

Wait there’s a coach’s challenge:
A. Was Kopitar offsides?
B. Did Jake Muzzin hold the puck in?
No, it’s C. None of the above!

Kings to the power play with the failed challenge.

04:33—Five-foot, ten-inch Leipsic takes down six-foot, eight-inch Jamie Oleksiak with the the combo high stick/interference call. Quite a sight and a big win for the small guys out there.

8:58—Kopitar with the rare miscue, sending the puck over the glass. He will sit for two minutes or less. The Penguins put the power in power play and the Kings are giving Pittsburgh every chance to showcase it with another needless penalty.

09:20—Jake Guentzel again. That’s five goals in the last 23 hours. The Penguins are 18-5-3 since they dipped briefly into the Jack Hughes Sweepstakes. Thing just got real tense at Staples Center. But have no fear as the “Go Kings Go” chants have returned. Yes, there’s A New Hope present tonight.

11:45—Oh geez. Another Leipsic penalty? Not what we need here, Brendan.

Now might be a great time to call your timeout and settle down the boys. You’re being outshot 14-4 this period and the curse of the flat-foot is starting to tsunami over your team.

Hello? Willie? You there? Wake up!

14:21—TV timeout. Not a second too soon for the Kings’ concerns.

16:27—Quick with an under-rated huuuuuuuge pad save. With Carter having such a great game, the number one star is probably secured, but without Quick doing his Jedi mind tricks all game, this could easily be a 7-4 game in favor of the Penguins. Shots are 18-4 (Pittsburgh) this period.

18:26—Timeout Penguins as they empty their net.

19:13—Kopitar with the empty net dagger! That’s his first multi-goal game since March of last year. Where has this Kopitar been all year?

Kings move up to 29th place in the NHL. Only eight points out of a playoff spot. That’s a win-win. Jack Hughes still in play. Playoffs still in play.

NEXT: The Kings begin a three-game road trip, visiting the Minnesota Wild on Tuesday.