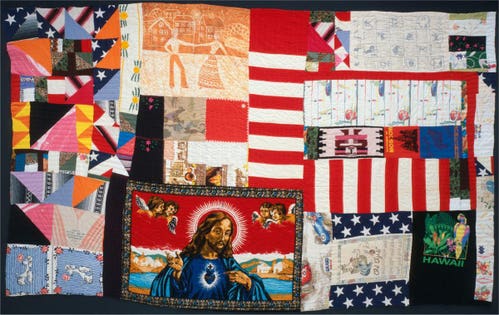 The term “outlier” entered the American consciousness full force in 2008 following publication of Malcolm Gladwell’s best-selling book, Outliers: The Story of Success. Gladwell’s book examined the conditions which allowed exceptionally successful people to achieve their success, particularly when contrasted against others who seemed destined for similar success, but who failed to reach it.

“An outlier, as we use the term today, is an individual or an agent or an entity that is at a distance from an aggregate, so from the norm,” Cooke told Art Agency, Partners. “But that distance isn’t fixed. It’s negotiable, and it changes.”

Cooke also stresses that the term “outlier” carries none of the negative connotations inherit in previous attempts to label the kind of work on display in this exhibit–outsider, folk art, self-taught, naïve, primitive, innocent.

“In introducing the term ‘outlier,’ this exhibition proposes a new concept, one that suggests that creators (both trained and untrained) who function at a remove from the mainstream, whether due to issues of involving race, gender, class, or schooling, may be working from positions of strength,” Rita Gonzalez, acting department head and curator of contemporary art and coordinating curator of the presentation at LACMA, said. “By bringing attention to histories and artists that have often been neglected or dismissed, the exhibition cuts against orthodox ways of thinking in favor of more diverse and inclusive representation in cultural institutions and art history.”

Outliers and American Vanguard Art focuses on three periods: mid-1920s to early 1940s, late 1960s to early 1980s, and mid-1990s to the present. These periods were marked by social, political, and cultural upheaval when values were brought into question. During these years, the boundaries between self-taught, marginalized artists and the avant-garde blurred with the mainstream, the “center,” becoming more receptive of work on the periphery. Artists from the margins gained a measure of agency they did not previously possess.

Use of the term “outlier” in an art history context has additional advantages according to Cooke.

“It’s also not bounded in the past,” Cooke further told Art Agency, Partners. “It hasn’t been used in this field before and therefore, I think, is clearly a term of the present. And the perspective of this show is a show that looks back to the past to see what precedents there have been and to see what may be gained from re-evaluating that.”

As you can imagine, the “outliers” on view in this show have a tendency to be non-white, non-male and not formally educated. They have also not been sucked into the gravitational pull of New York which has always dominated American art. Outliers and American Vanguard Art spotlights regionalism, from the Midwest to the South and West Coast.

This is particularly important for LACMA, the largest art museum in the western United States, located far from New York’s galleries and museums with a mission statement “devoted to collecting works of art that span both history and geography, mirroring Los Angeles’s rich cultural heritage and uniquely diverse population.”

The art world has always had a problem with labels. How does an industry categorize work and people when one of the most basic tenants of the people working that field, the creator, the artist, is to push boundaries and defy simple categorization? The “outliers,” who boggle every attempt define them, have too casually been dismissed to what amounts to the kitchen “junk drawer” of art crammed full with items connected only by their inability to be connected elsewhere.

Cooke, who is Australian and received most of her education and experience in Europe, deserves applause for attempting to redefine American art in a more holistic fashion. Perhaps it required an outlier to welcome “outliers” into the mainstream.

Whatever the label, the work on display speaks for itself.

If this style of art interests you, be aware that Christie’s hosts its “Outsider and Vernacular Art” auction January 18th with work from many of the artists in the Outliers exhibit going under the hammer including Henry Darger, Bill Traylor, Martin Ramirez and Sister Gertrude Morgan. Included in the sale are 40 works from the collection of financier William Louis-Dreyfus, father of actress Julia Louis-Dreyfus who played “Elaine” on Seinfeld among other roles.

Free public viewings of the auction items will be held all this week from 10:00 AM to 5:00 PM in the Christie’s offices at Rockefeller Center.