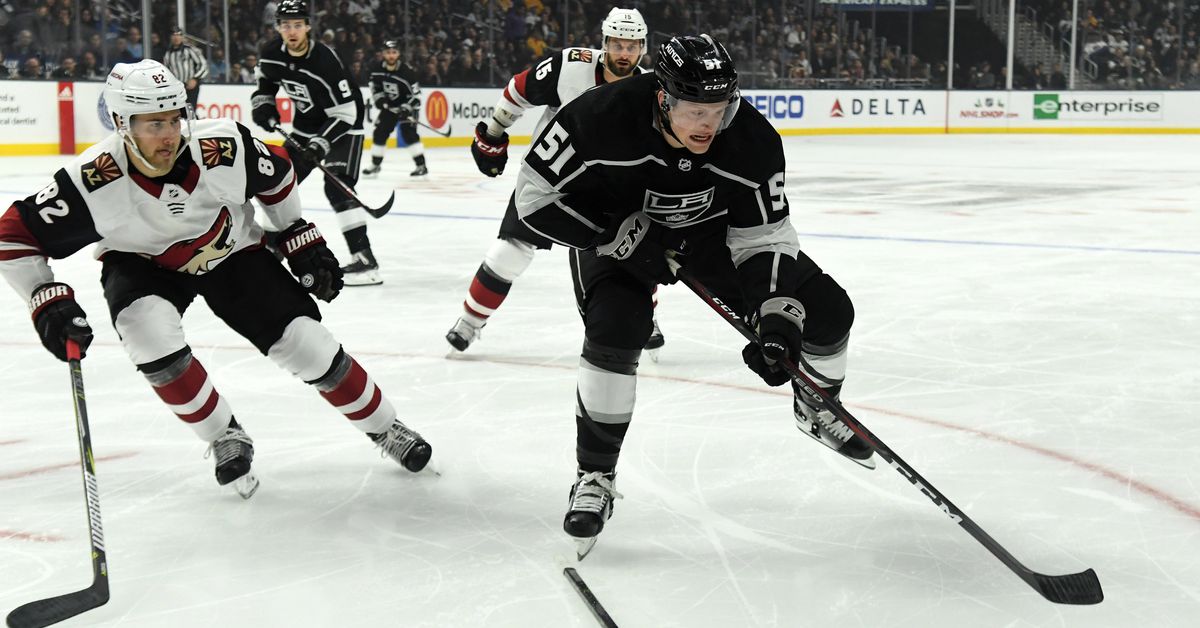 Good morning! The Kings have won four games in a row. Does anyone else feel kind of weird in the stomach parts about that?

Last night’s win wasn’t the most thrilling of games — save for some patented Jonathan Quick chaotic action:

And Austin Wagner continues to settle into his role of “very fast and also a pest” by standing up for Quick later in the game in, honestly, one of the only truly lively parts of the game. If you’ve followed my writing for any time, you’ll know I’m not a huge fan of fighting in hockey, but I think physicality of the “sticking up for your teammate” variety will never go away, and kudos to Wagner for being the one to engage Nick Cousins.

Next up for the Kings: the Vegas Golden Knights come to town on Saturday for another matinee game.

If you’re wondering how long we have to wait for the Wagner-Cousins rematch, the Kings don’t play the Coyotes again until March 9. Hopefully everyone has simmered down by then.

Slowly but surely, the Kings are gaining points. [Jewels from the Crown]

A view from the other side of the ice in last night’s win. [AZ Central]

After being passed up in the draft and signed as a free agent, Matt Luff is embracing his role with the Kings. [LA Kings]

Hopefully we never have to see these guys in action, but here’s a peek behind the curtain at the Kings’ (and Ducks’) emergency goalies. [The Athletic]

Oscar Fantenberg, having played in 12 straight games, is cementing his role on the Kings. [Kings Insider]

Alex Iafallo is exceeding expectations for his second season in the league. [Los Angeles Daily News]

This is just, like, a bundle of 10,000 rumors, but are the Philadelphia Flyers interested in making a deal for Jonathan Quick? [Sportsnet]

Ahead of the World Juniors competition, Hockey Canada hosted learn-to-play events for the South Asian community in Vancouver. [CBC]

Learn about the top five NCAA goalies in women’s hockey. [The Ice Garden]

Corey Schneider has not won a regular-season game in over a year. Yikes. [RMNB]

A look at some analytics-driven power play formations. [The Coaches Site]

Some early projections for NHL award winners. [The Athletic]

Jeremy Colliton has some big shoes to fill in Chicago. How did the Blackhawks even find their new coach? [ESPN]

Chris Krieder reflects on the past year after dealing with a blood clot that required surgery to alleviate. [New York Post]

Only three games to choose from tonight; your best bet for your entertainment would probably be the Toronto Maple Leafs and Columbus Blue Jackets game, airing at 4:00 PM Pacific (via the NHL’s streaming service). Toronto’s just real fun to watch, and it’s got the added bonus of being an Eastern Conference matchup which will have exactly zero bearing on the Kings whatsoever.

For World Juniors action, the United States (and Kings prospect Mikey Anderson) takes on Kazakhstan. This is Kazakhstan’s return to the top levels of IIHF competition after a decade of being relegated. The game airs on the NHL Network at 7:30 PM Pacific.