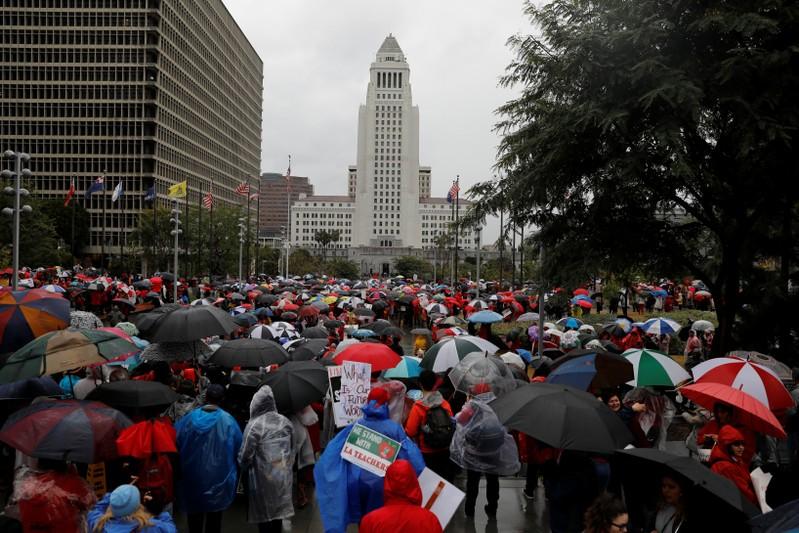 (Reuters) – No talks were publicly scheduled as the Los Angeles teachers’ strike enters its third day on Wednesday even as both the city’s mayor and California’s governor urged both sides to negotiate.

Some 30,000 Los Angeles teachers are on strike for higher pay, smaller class sizes and more staff.

Thousands were to hit picket lines again, while the district struggles to keep schools open for 1,200 campuses, relying on remaining administrators and substitute teachers to run classes.

“Things are developing in a good way there, and we’ll have more to report to you tomorrow on that,” Caputo-Pearl said.

Two press conferences are scheduled by the union on Wednesday, raising speculation talks could resume even though the union and the Los Angeles Unified School District (LAUSD) remain at loggerheads over how much money should be spent.

Neither district nor union officials were available early Wednesday for additional comment.

California’s Governor Gavin Newsom has been pushing for negotiations to resume and for the strike to end.

“This impasse is disrupting the lives of too many kids and their families,” the governor said in an online statement.

“I strongly urge all parties to go back to the negotiating table and find an immediate path forward that puts kids back into classrooms and provides parents certainty.”

The Los Angeles walkout followed a wave of teachers’ strikes across the United States over pay and school funding, including in West Virginia, Kentucky, Oklahoma and Arizona.

Denver teachers could vote to strike by Saturday if no deal on a new contract is reached by then.

Negotiators for the union and the second largest public school district in the United States have not met since teachers’ leaders rejected the LAUSD’s latest contract offer on Friday night, calling the proposal an “insult.”

The walkout ended 30 years of peace between the union and the district.

District Superintendent Austin Beutner said the district had offered staff increases that would cost $130 million a year – more than county officials have said is available – while the union’s demands would cost $800 million.

The union wants a 6.5 percent pay raise. LAUSD teacher pay currently averages $75,000, according to state figures. The district has offered a 6 percent hike with back pay.