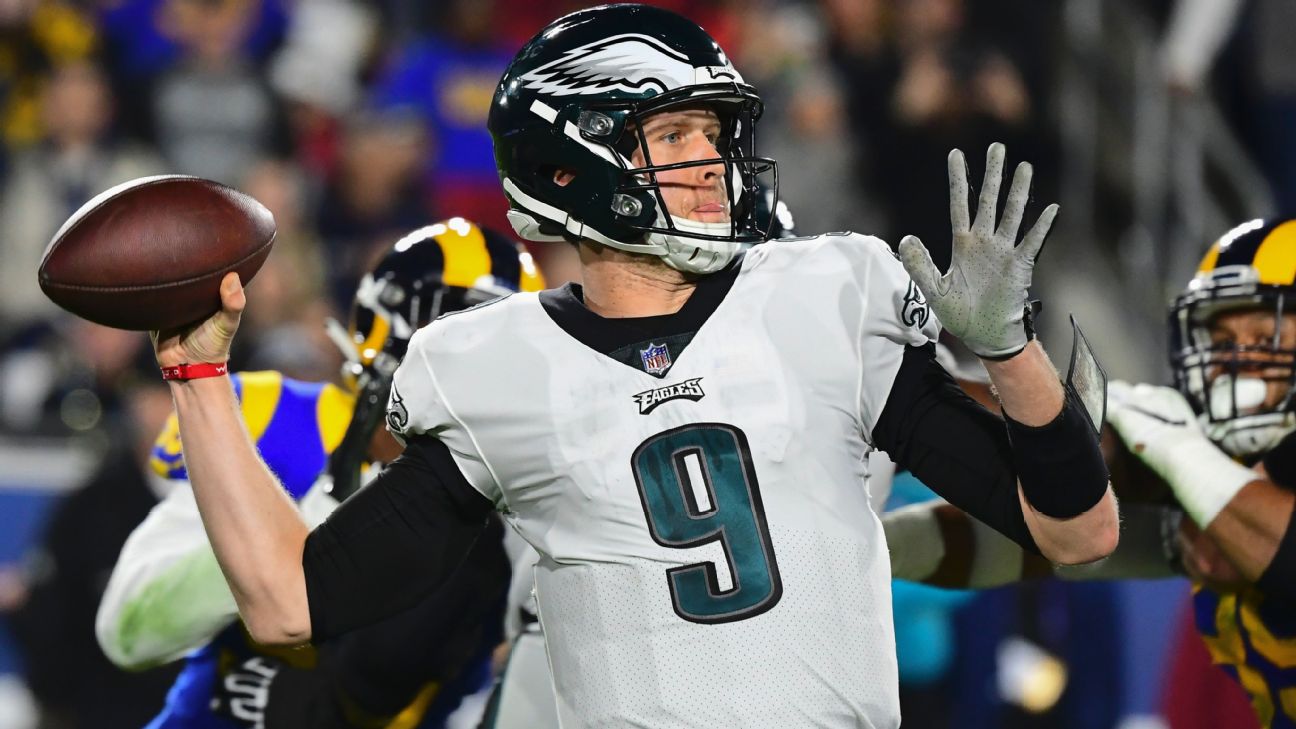 LOS ANGELES — The magic of Saint Nick reappeared Sunday night at the L.A. Coliseum, helping the Philadelphia Eagles to a 30-23 win over the Rams in one of the biggest upsets of the season.

The drill is quite familiar by now: Nick Foles steps in for Carson Wentz, the public doubts Foles’ ability to lead the charge, and the team responds by rising to improbable heights.

That story began to unfold at this very stadium this time last year. Wentz was lost to a multiligament knee tear, Foles took over and started on a ridiculous run that included three postseason wins as underdogs on the way to a Super Bowl championship — the first in the organization’s history.

Despite all that, the oddsmakers moved the point spread from as low as 7.5 points to 13.5 points when the news of Wentz’s back injury hit this week, putting Foles and the Eagles as two-touchdown underdogs.

Foles finished 24-of-31 for 270 yards and an interception. But the numbers don’t tell the full story. The offense came to life under Foles, hitting the 30-point mark for just the second time all season. Alshon Jeffery caught all eight of his targets and finished with a season-high 160 yards.

As 13.5 underdogs, it was the second-largest upset of the season behind the Buffalo Bills‘ toppling of the Minnesota Vikings in Week 3. It’s Philly’s largest upset win since 1995. The defending champs still have life at 7-7. Their chances of making the playoffs jumped to 34 percent, according to ESPN FPI. A loss would have dropped those odds to five percent.

The Rams nearly erased a 30-13 deficit, but a bobbled JoJo Natson punt return was knocked away by Tre Sullivan and recovered by D.J. Alexander late in the fourth, giving possession back to Philly. One final rally by L.A. ended as Jared Goff‘s pass in the corner of the end zone fell incomplete.

The Eagles are at their best when being counted out. Their mentality was evident pregame when injured safety Rodney McLeod came out of the tunnel holding a ski mask, signaling the team’s intention to steal the game.

“They’ve already got the script written apparently,” he said.

The defense intercepted Goff twice and suppressed a high-octane Rams for the first three quarters. This was the first home loss of the season for the Rams, who had been averaging 38 points per game at the Coliseum.

It was revealed Friday that Wentz has a stress fracture in his back that could take three months to recover from, according to coach Doug Pederson. Wentz has been seeking medical opinions on his injury outside the team. While he hasn’t been ruled out for the season, there’s a good chance this is Foles’ show the rest of the way. It not only gives Foles an opportunity to make more money — under his restructured contract, he gets an extra $250,000 for every game in which he plays at least 33 percent of the snaps, and another $250,000 if the team wins that game — but sets up intrigue heading into the offseason.

Foles’ contract includes an option for 2019 that both parties would have to be on board with to exercise. The base salary in 2019 is scheduled to be $20 million.

Wentz, meanwhile, is eligible for a new deal after this season. There is plenty to watch when it comes to the Eagles’ quarterbacks in the coming weeks and months. But there are more pressing matters.

The visitors left L.A. with chants of “Let’s go Eagles!” from the Philly-friendly crowd. They head home to play the 10-4 Houston Texans on Sunday before finishing the regular season at the Washington Redskins.

Meaningful football remains, thanks in part to Foles and the spark he provided.