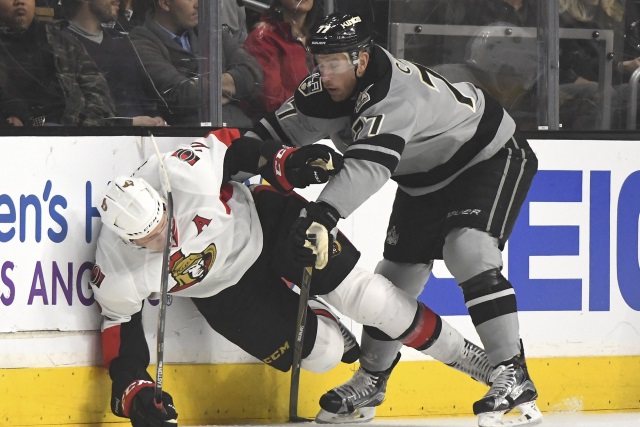 Could the Senators move Stone, Duchene and Dzingel?

The Senators can’t afford to lose any of those three for nothing after the season.

The Senators have the room to hand out money and give them term, but would owner Eugene Melnyk be okay with giving them big money upfront as well as lockout protection that they could likely get elsewhere?

Dzingle might be able to get a five-year deal at $5 million per.

Stone and Duchene could be looking at eight-year deals in the $8 to $10 million range.

Would also need to consider that if say Stone or Duchene left, would Dzingel want to re-sign? What if the team were to relocate or be sold, where would they end up playing? Signing somewhere as a free agent gives them that control.

Brennan believes that all three players will be traded before the trade deadline.

Ken Campbell of The Hockey News: 33-year old Jeff Carter has three years left on his deal at a $5.3 million salary hit. He is still good value for the next three years.

He’ll only collect about $7 million in real salary during those three years. That seems like it has the Arizona Coyotes written all over it. The Boston Bruins are believed to be a potential landing spot.

Carter doesn’t have any trade protection. If traded, and if he were to retire instead, the Kings would be stuck with a $2.75 million cap recapture penalty for the next three years.

Unlike defenseman Jake Muzzin who would net a decent return, the Kings may not be able to get a big return for Carter.

“He has told me very candidly that if he feels he has to make some changes that Jeff and a couple of other veteran players would be candidates,” Curran said. “Jeff’s preference would be to stay in L.A. and finish his career there.”

That doesn’t mean that Carter will get traded or that they are shopping him.