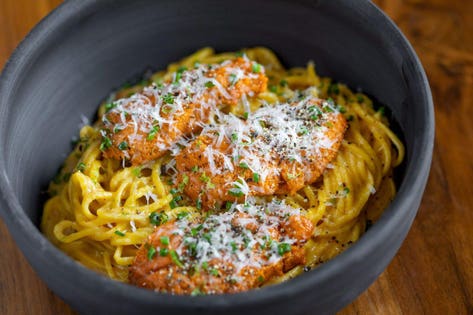 It’s hard to view Los Angeles as a singular city. At over 500 square miles, this diverse, loosely banded collection of neighborhoods is almost half the size of Rhode Island. But rather than seeing that as a flaw, residents celebrate it as a feature. Culinary excitement blows across this vast landscape like the Santa Ana Winds, sometimes it builds up along the shore in places like Venice and Santa Monica; other times it carries high into the hills and over the San Fernando Valley. For the past several years, Downtown LA has entrenched itself as the epicenter of headline-grabbing food and drink. Restaurateur Beau Laughlin is doing his best to attract that energy to Los Feliz. He holds a magnet in the form of Atrium, a hip new eatery housed in a former recording studio and rehearsal space.

Proper cooking is paramount to any aspiring dining destination, of course. But Los Feliz also benefits from its surprising degree of walkability. Yes, that’s right: people walk in LA. Particularly along the historic Vermont Avenue Strip, forming a commercial track along the neighborhood’s western edge. A certain ‘Old LA’ charm is best followed afoot, weaving its way through vintage shops, century-old cinemas. Sandwiched between such storied venues, tucked behind a nondescript alleyway is Laughlin’s airy new kitchen. It’s one he helped build by hand. “I don’t know many operators who design and build their own spaces,” says Laughlin. “Being able to conceive a concept from inception all the way to completion is something I take a great deal of pride in.”

Manning the helm is Hunter Pritchett, an inventive chef who made a name for himself over the past five years at LA mainstays like Son of a Gun and Melody. Here he plates full flavor into unexpected preparations of cacio pepe (served with generous lumps of sea urchin) and cauliflower grilled with pistachio and Middle Eastern spice to emulate the aromas and textures of a shawarma. His showstopper is a ‘Patchamama’ pork chop, rendered as a katsu under a bath of slaw and tonkatsu sauce. The eclectic menu purposefully reflects Los Angeles’ vibrant multiculturalism. Hispanic, Korean, Thai, and Vietnamese influences are in abundance from appetizer through dessert.

At the bar, beverage director Jordan Young is shaking things up with spirit-forward arrangements ranging from sweet and tropical to big and bitter. If It Ain’t Broke combines a spicy Rittenhouse Rye with oloroso sherry and the elegant notes of Carpano Antica vermouth for an advanced aperitif familiar to fans of boulevardiers and negronis.

The overall experience is enhanced, Laughlin contends, by a progressive business model. “All upper management in the front and back of house are owners in the business,” he says. “And I think it shows when you come to dine. Everyone has worked incredibly hard to make the business the best it can be, and you can feel that level of care.”

Well-conceived F+B in conjunction with a a stylish, semi-private atmosphere has marked the restaurant a fast favorite amongst trendsetters. Building upon that success, Laughlin looks to add more. “I’m a big believer in taking large spaces in great locations, and subdividing them into smaller complimentary businesses,” he explains. “In the coming months, we will open an intimate cocktail bar and additional restaurant, all within the same area of Los Feliz. I always say, ‘busy creates busy’ and this strategy of subdividing has greatly increased the overall buzz of our concepts.”

Laughlin’s growing empire adds compelling testimony to a case laid out by nearby Kismet (a Mediterranean standout), Bar Covell (a cozy neighborhood wine bar), and HomeState (a hip, fun take on Tex-Mex), among others. Namely: Los Feliz is a LA’s newest dining destination. In this city, you gotta be ready to go wherever the wind takes you. So set your sails and arrive hungry.