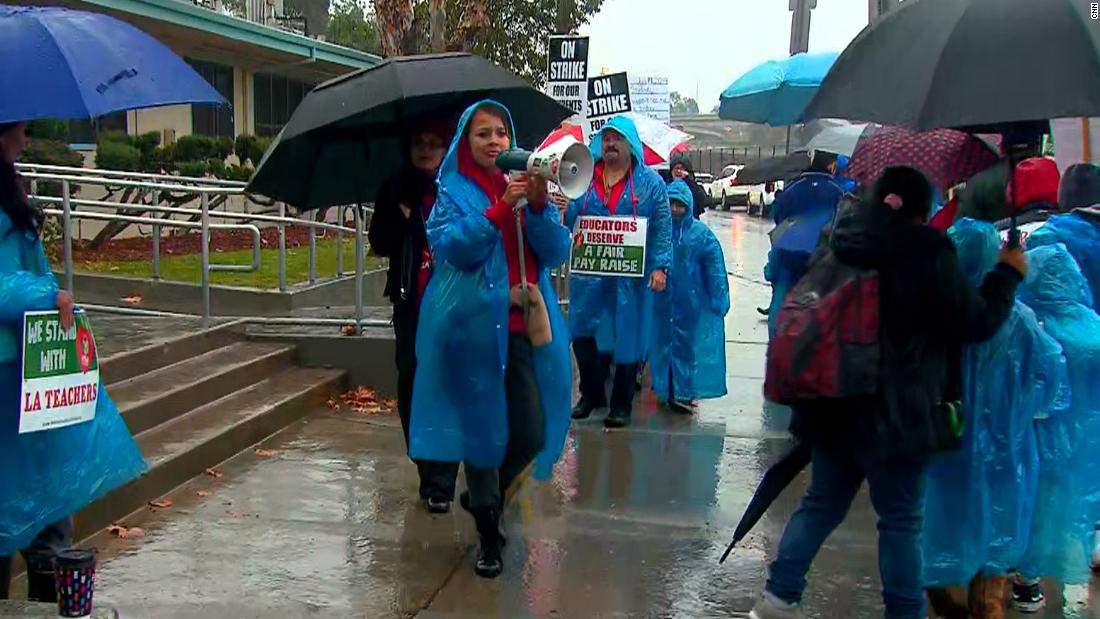 The union and school district have been unable to agree on how to fund smaller class sizes, bigger teacher salaries and more counselors and nurses in the district’s roughly 1,000 schools. Both sides agree that they want to achieve those goals.

The teachers’ strike is the city’s first in 30 years.

“About $15 million that would have been better spent to reduce class size, to hire more nurses, counselors, librarians… Each day we should be asking ourselves, ‘Why can’t we get this solved?’ Let’s finish this contract, let’s put that behind us, let’s move forward, let’s get back to Sacramento, where I was last week, let’s keep working for more funding so we can do more at our schools,” he said.

“We want to have fully staffed schools,” said Andrea Cohen, who’s taught at John Marshall High School for 24 years. “That means librarians, nurses, psychiatric social workers and their interns. We have 46, 45, 50 students in a class. It’s unacceptable.”

While the adults keep struggling to find a resolution, students were still expected to go to school during the strike Monday.

Despite the mass exodus of 32,000 teachers and staff, classes continued at all schools. LAUSD has hired about 400 substitute teachers and reassigned more than 2,000 administrators to help educate the 600,000 students.

At one high school, KCBS reported, ninth and 10th graders were brought to the auditorium instead of going to class.

Students at an elementary school in South Los Angeles were outside playing board games, KCBS reported.

And at another elementary school in East Los Angeles, only 89 out of 356 kindergarten through sixth graders showed up, KCBS reported. Some classrooms were left dark and students were in the auditorium all day, KCBS reported. One student even told KCBS Monday was a waste of time.

But some students still showed support for the strike.

“I wanna support the teachers and I want to see what happens after the strikes,” Evolet Vazquez told

While both UTLA and LAUSD have made some concessions, both the union and the school district accuse the other of giving misleading facts and figures.

UTLA leaders said on Facebook Monday night that superintendent Beutner “continued lying publicly” by saying he was willing to negotiate “around the clock.” They claim he didn’t show up to two of the three sessions teachers set up with the district that were scheduled for last Monday, Wednesday and Friday.

In LAUSD’s latest offer to the union Friday, the school district said it “would add nearly 1,200 more educators — teachers, counselors, nurses and librarians — in schools, reducing class size in thousands of classrooms.”

The offer would also “ensure no increase in any class size, increase nurses, counselors and librarians at all schools, along with a 6% salary increase and back pay for the 2017-2018 school year,” LAUSD said.

But union President Alex Caputo-Pearl said the offer was good for only one year and that the school district’s proposal was “woefully inadequate.”

The union wants LAUSD to pull from its $1.86 billion in reserves to increase school staffing and boost teachers’ salaries by 6.5%.

But the school district says it’s not nearly as wealthy as the teachers’ union suggests.

The school district said at this rate,

“Our commitment to our families is to make sure all of the money we have is being spent in schools. We are doing that,” Beutner said in a statement.

The financial situation is so bad, the Los Angeles County Office of Education is stepping in. Last week, the state-funded regulatory agency assigned fiscal experts to work with the school district on a plan to “eliminate deficit spending and restore required financial reserve levels.”

And the Los Angeles school board has ordered the superintendent to come up with a three-year “enterprise plan” to get more revenue by March 18. That plan “could include parcel tax and school bond measures, as well as strategies for increasing enrollment.”

Beutner blamed the union for the stalemate, saying it rejected the school district’s latest offer Friday and then “walked away from bargaining.”

California Gov. Gavin Newsom said Monday night he’s been having “productive conversations” with both parties in the strike.

“We need to get this to a conclusion, we need to see a deal and we need to make sure that both parties are well represented in that process,” Newsom said.