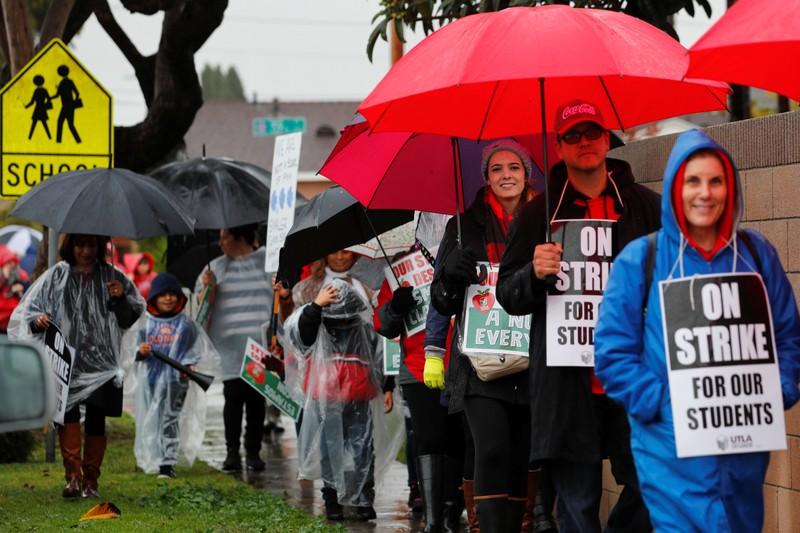 In the first teachers’ strike in the Los Angeles Unified School District (LAUSD) in 30 years, members of the United Teachers Los Angeles (UTLA) union are seeking higher pay, smaller classes and more support staff, while denouncing their current working conditions as an “injustice.”

“They are resolute on reaching an agreement,” the president of United Teachers Los Angeles (UTLA) union, Alex Caputo-Pearl, said at a news conference, referring to the union’s bargaining team ahead of Thursday’s talks.

LAUSD Superintendent Austin Beutner has said the demands, if fully met, would place too great a strain on the district’s budget.

The union is seeking a 6.5 percent pay raise. LAUSD teacher pay currently averages $75,000, according to state figures. The district has offered a 6 percent hike with back pay.

Mayor Eric Garcetti, who attended a teachers’ rally earlier this week and has voiced strong support for their cause, said in a statement that the two sides had agreed to reopen negotiations on Thursday, with his office serving as mediator.

Union leaders said Garcetti had met with both parties and that California’s top education official, state Superintendent of Public Instruction Tony Thurmond, was also in contact with each side and had offered his support in efforts to reach a settlement.

Thurmond could play a key role in helping the district secure extra funds it may need to close a deal with the teachers.

Negotiators for the district and the union have not met face-to-face since union leaders rejected the LAUSD’s latest contract offer on Friday. The union disputes Beutner’s assertions that the district lacks sufficient resources to accept teachers’ demands.

Caputo-Pearl said on Wednesday that the union was “engaged” with Thurmond, and with California Governor Gavin Newsom, to “try to push on the state as well for additional funding.”

“The money’s there. There’s no doubt about it. California is the richest state in the country,” he told reporters on Wednesday. “The money is there for kids.”

The teachers, who have been without a contract for nearly a year, walked off the job on Monday. LAUSD officials have kept all 1,200 of its schools open on a limited basis with skeleton staff of administrators and substitute teachers, but attendance has been running at roughly a third of normal.

Thousands of striking teachers fanned out across the sprawling school district for a series of rallies and picketing on Thursday, braving a fourth day of showers that did little to dampen their spirits.

“It’s important that we show the example of what we can do and the power that we have as the people,” said Justin Polk, a high school music teacher, at the news conference alongside Caputo-Pearl. “Our strength comes in numbers.”

The Los Angeles walkout follows a wave of teacher strikes last year across the United States over pay and school funding, including work stoppages in West Virginia, Kentucky, Oklahoma and Arizona.

Denver teachers could vote to strike by Saturday if no deal on a new contract is reached by then.

Beutner, a former publisher and investment banker, said the district had proposed staff increases that would cost $130 million a year – more than county officials have said is available – while the union’s demands would cost $800 million.