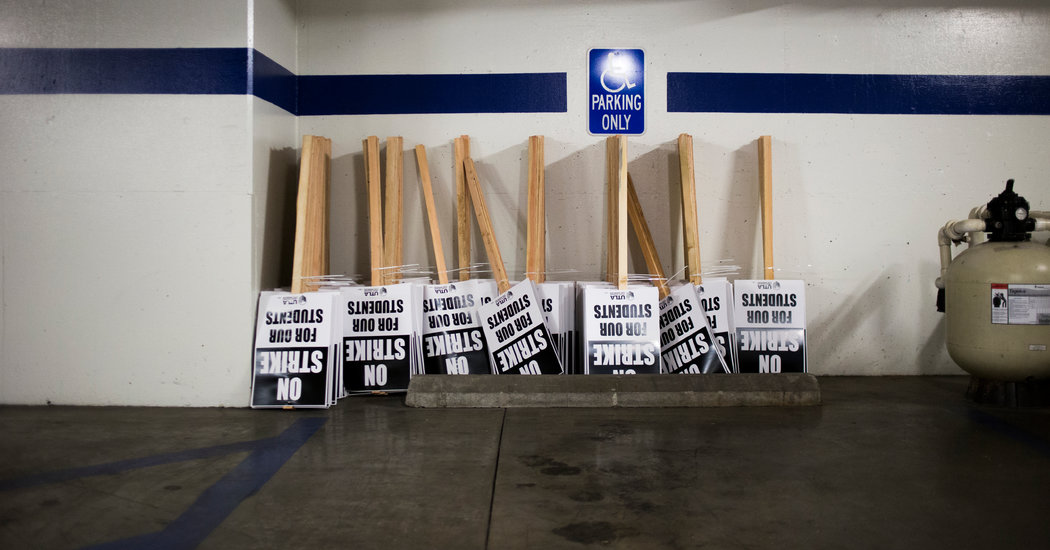 LOS ANGELES — Los Angeles public-school teachers reached a tentative deal with school officials on Tuesday to end a weeklong strike that had upended learning for more than half a million students in the nation’s second largest public school system.

The teachers won a 6 percent pay raise and caps on class sizes, which had become one of the most contentious issues between the union and district officials. The city and county will also spend money to expand services in schools, including hiring more nurses, counselors and psychologists.

The settlement came after tens of thousands of teachers marched in downtown Los Angeles and picketed outside schools for six school days, and after a round of marathon negotiating sessions over the holiday weekend.

The contract still needs to be ratified by members of the union, but that approval is widely expected. Teachers are expected to be back in their classrooms Wednesday morning.

“Today is a day full of good news,” Mayor Eric Garcetti said during a news conference on Tuesday morning at City Hall, as he stood alongside Austin Beutner, the superintendent of the Los Angeles Unified School District and Alex Caputo-Pearl, the president of United Teachers Los Angeles. “This is a good agreement, it is a historic agreement, it gets to lower class sizes, it gets to support services.”

“The strike is painful and had a cost,” the mayor added. “But there is no question to get here, the strike helped.”

The victory for the teachers’ union goes far beyond the new two-year contract.

“We have seen over the last week something amazing happened,” Mr. Caputo-Pearl said. “We took on the idea of bargaining for the common good. Public education desperately needs attention.”

The three men declined to give specific details, but said that the county and city would pay for some services and that class sizes would be reduced incrementally in every school starting next year.

“We’re spending every nickel we have,” Mr. Beutner said. “It’s all in for schools. This is the start, not the end.”

In recent years, teachers in many states have often found themselves on the defensive, as politicians and educational leaders demanded that more be done to weed out ineffective teachers. But political leaders rallied to the side of the striking Los Angeles teachers, calling them “heroes” who are “on the side of justice.”

The strike also drew attention to how California, one of the wealthiest and most liberal states in the country, spends relatively little on its public schools.

The state’s chronically constrained school spending is largely attributed to its property tax laws, and especially to Proposition 13, a ballot initiative passed in 1978 that drastically limits tax rates and makes increases difficult to enact. Affluent, fast-growing suburban communities have suffered less under the law than large urban systems like the Los Angeles Unified School District, where declining enrollment and rising costs for pensions and health care have created budget problems year after year.

While many educators and local leaders have called the strike a watershed moment for public schools in the state, it is far from clear whether there is a political willingness to change the statewide property tax laws or to try to persuade Los Angeles voters to approve a local bond issue to raise the money the schools need.

The strike settlement is also a significant achievement for the mayor of Los Angeles, Eric Garcetti, who has no formal authority over the school system. Though he publicly supported the teachers, he managed to act as a mediator of sorts and helped to broker the deal during days of negotiations at City Hall. Before the strike, Mayor Garcetti had largely shied away from involvement with the public schools, but with the national spotlight on the strike and the mayor considering a presidential bid in 2020, he appeared eager to get involved during the last week.

Teachers in several other states, including Oklahoma and West Virginia, have managed to win raises and increases in school spending through statewide strikes that attracted wide public and political support.

Other major American cities are now facing a possible school walkout, even as Los Angeles reached a settlement. Teachers in Denver began voting over the weekend on whether to strike, after negotiations with the city’s school system failed to produce an agreement on Friday, local news outlets reported. And teachers in Oakland have said they’ve drawn lessons from Los Angeles teachers and are now preparing to vote on a strike.

With fewer than half the district’s students attending school during the strike, officials said the walkout had cost the district roughly $125 million in state financing that is distributed based on attendance.

A poll released by Loyola Marymount University on Tuesday showed that the overwhelming majority of Los Angeles residents continued to support the strike.