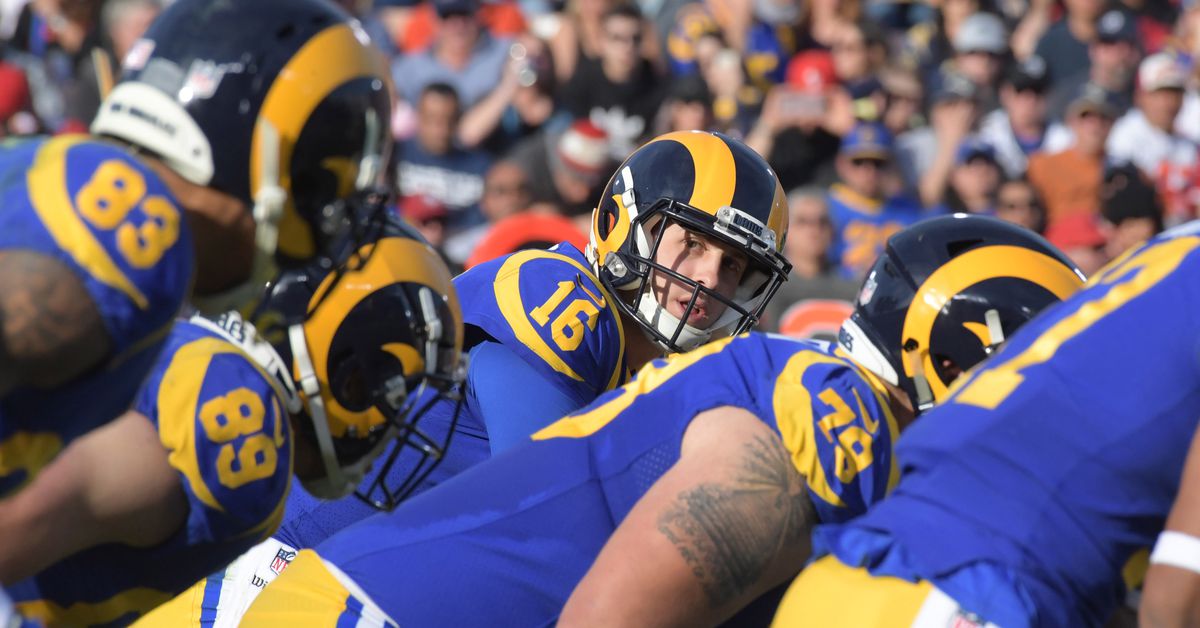 Apparently none of the NFL’s six highest-paid quarterbacks or their teams will be participating in this year’s playoffs. You can give a pass to the Jimmy Garoppolo, who tore an ACL after 3 games, but that still leaves Aaron Rodgers, Matt Ryan, Kirk Cousins, Matthew Stafford, and Derek Carr on the outside looking in.

None of the 6 highest paid QBs in the league made the playoffs in 2018. They combined for 31 wins.

That’s not to say that the listed quarterbacks laid an egg, but that the margin for error increases when a quarterback exits their rookie deal and takes a giant bite out their team’s salary cap structure. The Rams view this season, as well as next season, as their best shot to capture both a Lombardi Trophy and the imaginations of Los Angeles sports fans, as quarterback Jared Goff plays out the remainder of his rookie deal.

Like Les Snead and the Rams brass, fans should should also view this playoff run as extremely important, especially for the eventual legacy of names like Jared Goff and Sean McVay, and the rebooted Rams franchise as a whole. Yes, just a year ago we all shed tears of joy when the Rams finally claimed an NFC West crown for the first time 14 years, but now is the time to think big. Remember when the Greatest Show On Turf turned the franchise around in a single season and won the whole enchilada?

If this season ends in a hard fought loss in the NFC Championship, many will view this as a step forward and declare that the progress from last season is just part of a trajectory that will inevitably culminate in a Super Bowl victory down the line. While that could happen, it is certainly not a lock. Eventually, the Rams will need to rely heavily on Jared Goff to carry them through sloggy wars, with a supporting cast that will likely have less blue chippers to lean on. While he’s proven to be an above average quarterback, who can be a surgeon when times are good, he will certainly need to continue to develop to become that type of player. So the time is now.

Win one while Andrew Whitworth is anchoring the line. Win one while Todd Gurley is still Todd Gurley – health provided. Strike while the iron is hot, and get that monkey of your back before it ever arrives.

As for Sean McVay and these Rams, this can go two ways. Last year’s loss to the Atlanta Falcons during Wildcard Weekend was unexpected, but was forgivable for a team that had ascended faster than anyone would have expected. This year is different. The team knows that they won’t win by showing up, or because the crowd is turned up. This year, they will have to make plays, and turn in clean complete efforts. If they can get it done, they will again be gold, just as they were until the bye week. Sean McVay will become transcendent in a way that “We Not Me” will cast a shadow larger than any speed bumps or character issues could ever present. McVay will BE the Rams.

Or they could come up short against the physicality of the Chicago Bears, Dallas Cowboys, or Seattle Seahawks. Or they could get drummed in New Orleans by Drew Brees and his well-oiled offense. If that’s the case, expect the armchair pundits to start sticking labels to this edition of the Rams, and doubts to be cast. It could be an offseason of uncomfortable questions if the Rams don’t assert themselves on the playoff field.

There’s a lot at stake, and the window is now.

Let’s see if the Rams can get back to controlling the line of scrimmage.

Let’s see if the vets, like Ndamukong Suh, can take it to another level with all the chips on the table.

Let’s see if Sean McVay continues to reestablish the Rams’ commitment to the run, which may be the best way to make sure Goff is at his best.

The story will be written over the next few weeks, let’s hope it’s one that you’ll want to tell your children and grandchildren someday.