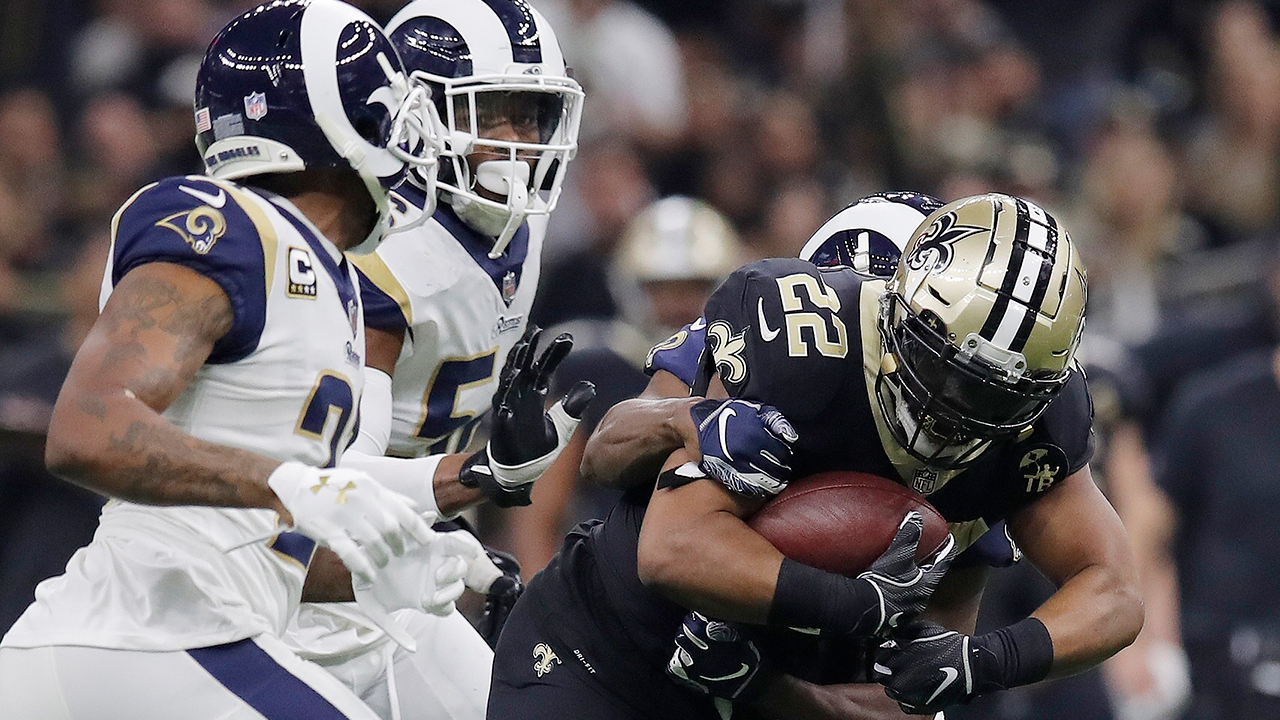 The Latest on the conference championship games (all times EST):

The Los Angeles Rams have defeated the New Orleans Saints in overtime in the NFC Championship.

Greg Zuerlein made a 24-yard field goal with 5:03 remaining in the fourth quarter and the Rams tied the Saints 20-20 in the NFC championship game.

The kick capped a nine-play, 85-yard drive for the Rams, who trailed 13-0 after the first quarter.

Jared Goff completed passes to Josh Reynolds for 33 yards and to Gerald Everett for 39 yards on the drive.

Both are a bit of a surprise. Wise has been dealing with an ankle injury but was taken off the report this week, while Shelton is a helpful body when it comes to stopping the run.

The Patriots are choosing instead to go with an extra defensive back.

Chiefs right guard Laurent Duvernay-Tardif also is inactive. He returned to the active roster from IR this week after missing time with a broken leg. But the Chiefs chose to stick with Andrew Wylie, who has been playing well in a starting role.

The Los Angeles Rams cut New Orleans’ lead to 20-17 with a short touchdown pass from Jared Goff to Tyler Higbee late in the third quarter.

Higbee was wide open in the right flat on a third-down scoring pass after Saints defenders packed the middle in apparent anticipation of a run on third-and-goal from the 1.

The touchdown capped a 10-play, 75-yard drive highlighted by a 25-yard pass to Brandin Cooks and a 16-yard run by receiver Josh Reynolds to the New Orleans 1.

The score came after New Orleans had gone up 20-10 on its previous possession.

The New Orleans Saints have regained momentum early in the second half and widened their lead to 20-10 on a short touchdown catch by versatile third-string quarterback Taysom Hill.

After allowing the Rams to score the last 10 points of the first half, New Orleans’ defense quickly forced a punt on Los Angeles’ opening possession of the third quarter. After retaking possession, Saints methodically drove 71 yards with a mix of power runs by Mark Ingram and short receptions by Alvin Kamara.

Kamara caught four passes on the drive and has been the Saints’ top receiver in the game with 10 receptions for 88 yards. Ingram rushed three times for 25 yards during the series, including a 16-yard carry.

The Rams have pulled to 13-10 at halftime following a two-minute drive highlighted by Jared Goff connections of 17 and 36 yards to former Saints first-rounder Brandin Cooks.

The Saints opened up a 13-0 lead with a pair of Wil Lutz field goals and Drew Brees’ 5-yard touchdown pass to seldom-used tight end Garrett Griffin on their first three possessions. New Orleans’ second field goal was set up by linebacker Demario Davis’ interception of a short pass that deflected off Gurley’s hands.

But Los Angeles, which will receive to open the third quarter, responded with 10 points in the second quarter. The touchdown capped an 81-yard drive that took just 1:29 off the game clock.

The New Orleans Saints will be without tight end Josh Hill for the rest of the NFC championship game.

Hill left the game with a concussion after hauling in a 24-yard pass from Drew Brees.

While making the tackle, Los Angeles Rams linebacker Cory Littleton delivered a forearm to Hill’s head. No penalty was called, but Hill staggered off the field to be evaluated by the medical staff. Just before halftime, the Saints announced he was done for the game.

The loss of Hill led to a much bigger role in the offense for Garrett Griffin, who spent most of the season on the practice squad and had only one career catch coming into the game.

Griffin hauled in a 5-yard touchdown pass and finished the half with two catches for 12 yards.

A fake punt gave the Rams their first first down on their third possession and led to their first points of the game on a field goal.

Jonny Hekker’s pass to Sam Shields along the right side caught the Saints off guard on fourth-and-5. The play sustained a drive that produced three more first downs before Los Angeles stalled on running back Todd Gurley’s dropped pass inside the New Orleans 20.

New Orleans used a little gamesmanship to sustain the drive after their third third-down failure in the red zone on three possessions to start the game. The first two ended in field goals. This time, they kept the offense on the field and drew the Rams’ aggressive front offside for the first down.

The Saints have converted an early turnover into a second field goal to take a 6-0 lead.

New Orleans’ second possession began on the Rams 16 after Jared Goff’s short pass over the middle deflected off running back Todd Gurley’s hands and into the arms of Saints linebacker Demario Davis.

It marked the Saints’ second time in the Rams’ red zone, and the second time they stalled on third down with a short field. Wil Lutz, who kicked a 37-yard field goal on the opening drive, came back out to hit from 29 yards.

The silver lining for Los Angeles is that it trailed by only one TD after its defense held twice inside its 20.

The New Orleans Saints have opened the NFC title game with a field goal after very nearly scoring a touchdown.

Drew Brees converted third-down passes of 9 yards to Ted Ginn and 21 yards to Alvin Kamara to sustain the drive, which stalled when tight end Dan Arnold was unable to hold on to a third-down pass in the back of the end zone.

Wil Lutz came on and connected from 37 yards to give the Saints a 3-0 lead.

There are no surprises among the Los Angeles Rams’ and New Orleans Saints’ inactive lists for the NFC championship game.

Both teams came in largely healthy and most of those not in uniform are healthy reserves.

The Saints already had ruled out receiver Keith Kirkwood with a calf injury that sidelined him during practice the past week. Kirkwood’s absence comes one week after he caught a critical fourth-and-2 touchdown pass in New Orleans’ comeback victory over Philadelphia in the divisional round.

Also scratched from New Orleans’ lineup is veteran tight end Ben Watson, who has been ill this week. He is in the Superdome with the Saints and even could be seen stretching on the field, raising his prospects for returning if New Orleans advances to play in the Super Bowl in two weeks.

Los Angeles did not have a single player on its injury reports last week.

Here are the full inactive lists for both teams.

The Los Angeles Rams are back inside the stadium where they lost for the first time this season, looking for retribution and a Super Bowl berth as they face the New Orleans Saints in the NFC championship game.

The Superdome is coming alive for the last time this football season as predominantly Saints fans arrive for just the second NFC title game to be held at the site of seven Super Bowls.

The previous time the Saints hosted a game this late in a season, they pulled out a hair-raising overtime triumph over Minnesota en route to their first Super Bowl appearance – and championship.

That was the 2009 season. Some nine seasons later, coach Sean Payton and 40-year-old, record-setting quarterback Drew Brees are back with a largely different cast, one victory away from the team’s second trip to the NFL’s biggest event.

When these teams met in Week 9, running back C.J. Anderson had not yet joined Todd Gurley in the Rams’ backfield and Los Angeles cornerback Aqib Talib was not healthy enough to play. Their availability puts the Rams in a stronger position than they were in back on Nov. 4, when they fell to New Orleans 45-35.

This is the first NFC title game for Rams 32-year-old, second-year coach Sean McVay and his 24-year-old quarterback, Jared Goff.

On the AFC side, the New England Patriots are in their eighth consecutive conference championship game and trying to reach the Super Bowl for the fourth time in five seasons and the ninth time overall in the Bill Belichick-Tom Brady era.

One thing that is unusual is that the Patriots are a slight underdog against the top-seeded Chiefs.

“We’re going against a team that’s the No. 1 seed in the league,” Brady said after the team’s final practice on Friday. “I’m sure there’s a lot of people that are thinking they’re going to win. Everyone can have their own opinion. We certainly have an opinion, and we’ve got to go out there and execute our best in order to accomplish that.”

The winners that emerge from the conference championship games will meet in Atlanta on Feb. 3 in the Super Bowl.

(Copyright ©2019 by The Associated Press. All Rights Reserved.)