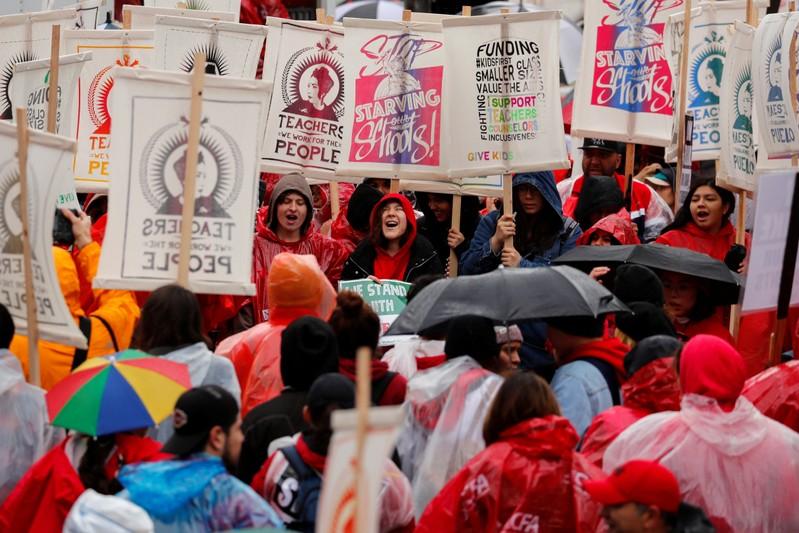 LOS ANGELES (Reuters) – Elizabeth Rietz says it hasn’t been easy taking care of her daughter at home during the first two days of a strike by Los Angeles teachers, while she and her husband try to start their own clothing line. But she believes it’s the right thing to do.

FILE PHOTO: Students attend a march by some of the more than 30,000 teachers in the Los Angeles public school system who held a rally at the City Hall after going on strike in Los Angele, California, U.S., January 14, 2019. REUTERS/Mike Blake/File Photo

Like many parents Rietz, whose daughter is a 4th grader at Ivanhoe Elementary School in the middle-class Silver Lake neighborhood, has taken on the extra burden in solidarity with 30,000 teachers demanding higher pay, smaller class sizes, more staff and less testing.

“We’re choosing to struggle because we support the teachers. And we would rather struggle at home and try to entertain our daughter while we work, so that we can send a message to the district that we believe that class sizes should be reduced,” Rietz, 42, told Reuters in a telephone interview.

But only about a third of the district’s 492,000 students turned up on the first day of the work stoppage, many parents choosing to keep their children home. The Los Angeles Zoo, La Brea Tar Pits and area museums have offered free admission to students during the strike.

Even with attendance down sharply, limited staffing meant schools gathered students in gymnasiums for “independent study.”

The walkout entered its second day on Tuesday, three days after negotiations broke down over a new contract and with no new talks scheduled between the district and United Teachers Los Angeles.

UTLA negotiators have demanded a 6.5 percent pay raise. Teacher pay currently averages $75,000 in the district, according the California Department of Education. The district has offered a 6 percent hike with back pay.

Rietz is among a group of Ivanhoe parents who decided in discussions on social media to keep their children home.

The expansion of charter schools has been a sticking point in negotiations. Union negotiators say they drain higher performing students and their more engaged parents from traditional campuses.

“I think the charter parents are very informed, a lot of us work very hard for our schools,” Crames said. But Crames agrees with teachers that class sizes should be smaller.

She said keeping her daughter home was a gesture of support for the walkout, which she could offer because of the “privilege” of her economic stability.

Her daughter was spending the week building her own computer.