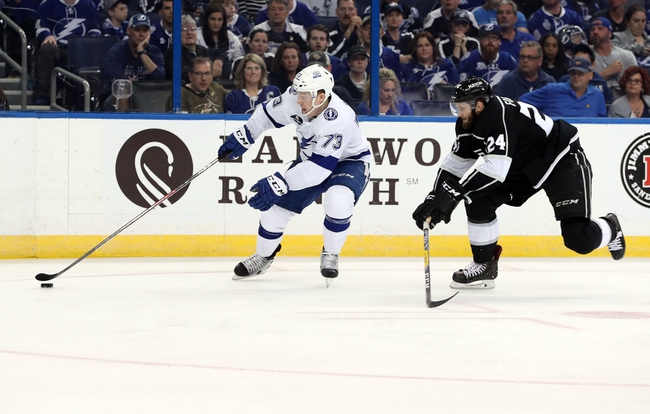 The Tampa Bay Lighting and the Los Angeles Kings meet in NHL action from the Staples Center on Thursday night.

The Tampa Bay Lightning will be looking to build on their current 6-game winning streak after a 2-1 overtime win over the Anaheim Ducks in their last outing. Nikita Kucherov opened the scoring for the Bolts before Nick Ritchie tied the game for Anaheim with less than three minutes to go in the opening period. The game remained at 1-1 through the 2nd and 3rd periods as none of Tampa Bay’s 25 shots on goal in the last two periods would find the back of the net. It didn’t take long in OT though, as Brayden Point slipped the first shot of the extra period home to give the Bolts the 2-1 overtime win. Andrei Vasilevskiy got the win to improve to 15-3-2 this season after stopping 35 of 36 shots faced in the winning effort.

The Los Angeles Kings will look for a rebound performance after falling to Vegas by a final score of 2-0 in their last outing. The Kings did a good job battling through the first two periods, but mustered up just 12 shots on goal through 40 minutes of play. Brandon Pirri opened the scoring for Vegas and Alex Tuch chipped in an empty net goal to seal the deal for the Golden Knights, who outshot L.A. 48-17 in the game, including 21 shots in the 3rd period. Jack Campbell fought hard in the loss, falling to 5-8-0 this season after stopping 46 of the 47 shots he faced in the losing effort.

I’d like to give the Kings a shot here, but the fact is that the Lightning haven’t lost a game in regulation in over a month, logging at least one point in 15 straight games and in 20 of their last 22 games overall. It’s not often that you’d get the Bolts in this situation with a price tag under -200, but the juice is still a bit steep for me and since I think that Tampa can win this one by a couple, I’ll side with the Lightning on the puck line to squeeze some extra value out of this bet.