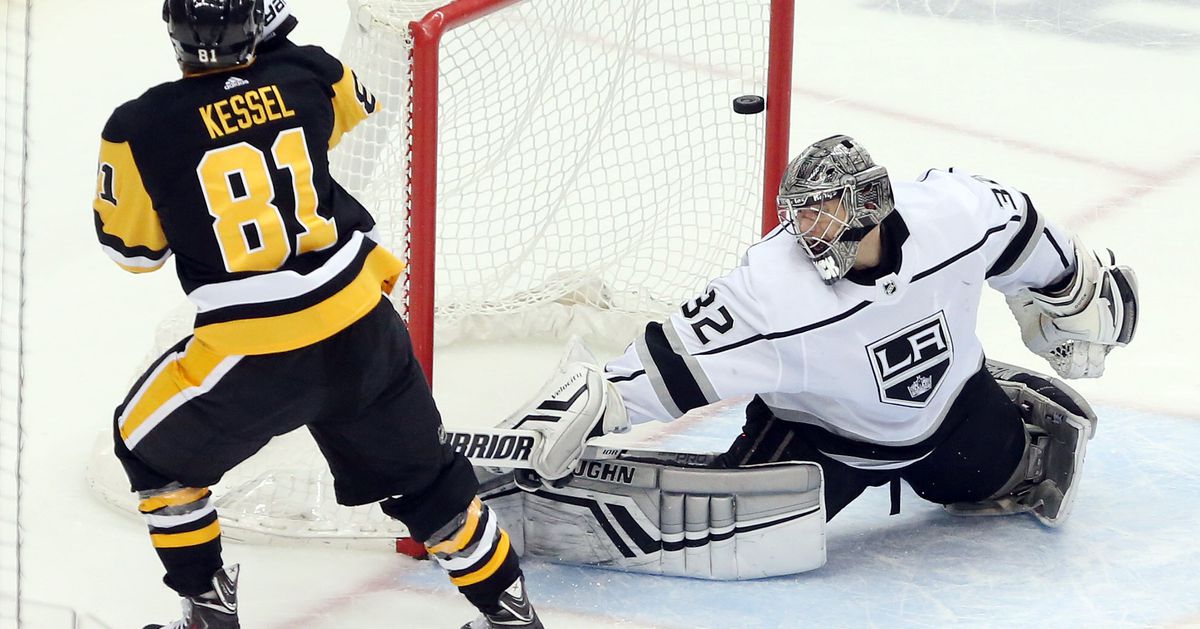 We’re live from PPG Paints Arena in Pittsburgh as the Penguins take on the Los Angeles Kings. Mercifully, the road trip ends tonight in Pittsburgh. The Kings haven’t looked good since the second period in Buffalo and have managed one point so far and sit at 0-2-1.

Jonathan Quick is 3-4-3 in 10 appearances all time against the Penguins, with a 2.51 GAA and a .909 save percentage. Quick’s three victories are his fewest against any team (aside from Vegas). Last night at dinner I spoke with my kids about maybe Willie Desjardins having a little restraint and not playing Quick tonight and letting him heal properly. Yeah, that was a lot to ask.

Unbelievable that he would play Quick tonight. Seriously.

I’ve never seen so many empty seats around the glass in Pittsburgh. I mean, what else is there to do there on a Saturday night? Lots of yellow seats all the way around.

Kings to the power play twice. The first one produces nothing. Actually, the power plays are painful to watch. The second man advantage produces a Jeff Carter chance that he doesn’t get all of which immediately leads to a shorthanded Matt Cullen goal. Penguins 1. Kings 0.

I’m sticking to my assessment that the Kings should decline all penalties. One day they will listen. After the Obligatory Willie Desjardins Lost Look, Jim goes into a long explanation of the Kings rush on the power play and what they go over in practice. No one can convince me that this team practices the special teams play. If they do, you wonder how the coaches still get paid. Maybe Dustin Brown should become the player-coach.

Kings outshooting Pittsburgh 12-3 as the Pens head to the power play.

Quick transition for Pittsburgh. One pass. One Shot. One Goal. It’s Bryan Rust this time. I just realized that we have 48 more of these games left in the 2018-19 season. That’s sobering.

Where’s this guy been the last 15 games? Tonight he snipes it home! But wait. We have a coach’s challenge.

After further review, the play is ruled offsides. No goal. Poor Tyler Toffoli.

Special teams are the story tonight. Two empty trips on the power play and a shorthanded goal given up. Nothing surprises me anymore about this team.

Jake Muzzin, who was originally drafted by Pittsburgh, finishes a perfect pass by Anze Kopitar off the rush. Picture perfect. Muzzin being showcased on this trip. There’s hope once again!

Tanner Pearson remembers all of Drew Doughty’s moves, stripping him of the puck and then putting Quick on the ice and lifting it into the empty net. Pearson comes back to haunt the Kings. You could see that coming tonight. All night. All day.

That’s the third time on this trip Drew has been stripped of the puck on this trip. Coincidentally, Drew is also a minus 3 tonight. I wish it were 2014 again. Sigh.

Matt Luff creates his own screen and cashes in with his seventh goal in 17 games. Rookie on a pace for 24 goals. Wagner’s great pass to himself off the boards to himself will go uncredited on the scoresheet, but shouldn’t. Hope reigns again.

Much better period by the Kings, however, after the first, the bar was fairly low. Looking for push the pace to start the third.

Kings come out strong this period. Drew with a couple of lasers on alternate shifts but denied. There’s chance because the Kings look like they want a couple of points tonight.

Adrian Kempe gets boomed as he enters the zone by Juuso Riikola and then spends the next ten seconds straightening his helmet as play continues around him.

They are doing the wave in Pittsburgh. Did I mention that Pittsburgh really induces the hate in me?

Unbelievable! The Kings power play actually does something positive! Jake Muzzin to Kempe to Alex Iafallo with a laser to give the Kings the tying marker with seven-and-a-half to play!

Kings get a point. Looking for more. Time for bonus hockey.

Carter-Doughty-Toffoli to start overtime? That’s like four goals in a combined 50 games. I know they are due, but Kopitar-Brown-Doughty sounds a lot better.

And, as soon I write it: Toffoli on the breakaway and he’s…denied!

Wait. What? Brendan Leipsic and Nate Thompson are on for the Kings? You have to be kidding me! Note to Willie D.: You’re an idiot…

Leipsic promptly takes a slashing penalty against Sid the Kid. Ridiculous that Leipsic would even be out there. The Penguins will be on the power play the rest of the overtime period.

Boom. That didn’t take long. Phil Kessel strikes on the power play. Doughty smashes his stick against the crossbar and throws the rest of stick in disgust. Quick smashes his at the bench. It’s all fitting in a smashing defeat.

Valiant effort wasted by the incompetent Willie Desjardins. If I had a stick I would smash it over my television Drew Doughty-style.

NEXT: Kings return home to face Winnipeg on Tuesday.

“We lost. [expletive] effort’s not enough, you know? That’s a given, effort should be there every [expletive] night. We lost, so that’s how it works.”

“It’s a tough one, you want to win those games. We did battle back, had good chances and a good battle back from all of us. On the negative, we wanted that win, you just have to finish some chances. We have to help out Quickie there, we should’ve gotten the win there.”