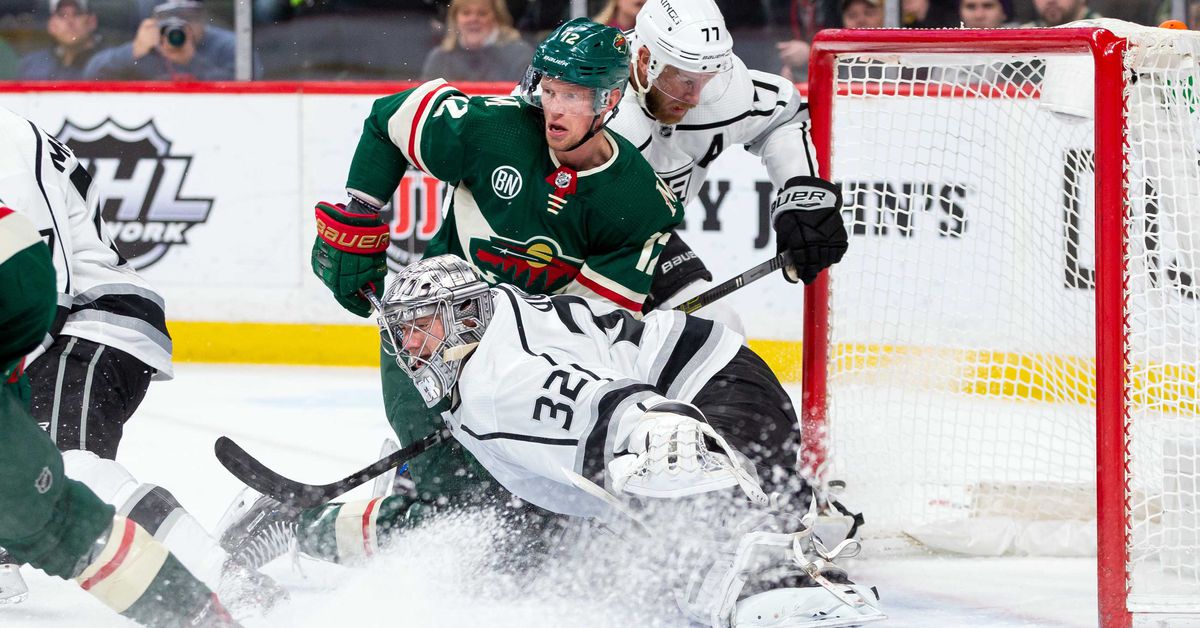 It’s the Los Angeles Kings versus the Minnesota Wild. This Kings are chasing Minnesota in the standings, sitting only eight points out of that final playoff spot in the West. Do they have a shot? Probably not, but this team is built on the #Believe movement and yes! Yes we do! The reason that the Kings do have a shot is because the Wild look like they have given up on coach Bruce Boudreau. Usually Boudreau’s teams wait until game seven of the playoffs to give up on him.

Pardon me while I go on my favorite Bruce Boudreau asides. Boudreau has coached in eight game sevens in his career: four with Washington and four with Anaheim. He has only won one of these games. Imagine being just the opposite of Justin Williams. I hear he’s a lovely man. Thankfully, he coached the Ducks to game seven losses in four consecutive years; it made hockey that much better from 2013 through 2016. Thanks Bruce!

I’m going to try and take it easy on Willie Desjardins in the last half of his Kings career, but he certainly doesn’t make it easy. Take this gem from Saturday’s dismantling of the Penguins at Star Wars Night:

Desjardins, on no call when Alec Martinez lifted a puck out of play and was followed by Anze Kopitar’s goal, and whether he communicated with the officials after a delay of game was not assessed:

“No, I never talk to the refs, there was nothing for me to say. I didn’t see that on the ice, I didn’t get a look at it. But we’ve had a lot of things go against us.” —Desjardins, on the no call when Alec Martinez lifted a puck out of play before Anze Kopitar’s empty net goal.

Oh Willie…I thought working the refs and watching the game was part of your coaching duties. My bad. Our bad.

Tonight, we are live from the Media Guy Man Cave with a running diary. The North Star State menu includes Swedish Meatballs, wild rice soup, polish sausage (all beef), and some pecan caramel and cinnamon rolls. The menu is better than normal because this game is in primetime and on national television.

On with the puck drop.

I know this is supposed to be a running diary loaded with tidbits and what-not, but the first twenty minutes was a clinic by Jonathan Quick. One day you’ll look back at this decade with Quick in net and mutter to yourself why Quick wasn’t lauded as an elite goaltender by the know-it-alls out there. I challenge any other goalie on Earth to have kept that a zero-zero game heading into the second. By my count it should be 3-0, even 4-0. If I were you, I’d do myself a favor and find this period and watch it. Admire the greatness of Jonathan Quick.

Kings came out flat despite Willie D.’s proclamation that, “If we want to win, we have to be passionate early.” Passion took a hit in this one, but Quick brought his passion bucket.

3:01—Hooking against the Wild. Kings to the power play. What adventures will we see here? One can only imagine what the next 120 seconds will bring.

Kings send out Anze Kopitar, Jeff Carter, Ilya Kovalchuk, Dustin Brown, and Drew Doughty. When will Willie D. learn that four forwards and one defensemen are not the recipe for success? I’m going with never…

5:01—Penalty killed off; who could have possibly envisioned that outcome?

10:16—Nino Niederreiter strips an unaware Dion Phaneuf of the puck behind the Kings net, circles out through the right wing circle, and fires it through traffic and off Kopitar for the seeing eye goal. If you figured that this would be the only way to get one past Quick tonight, you figured right.

11:29—We have our first Obligatory Willie Desjardins Lost Look of the evening, this time courtesy of a Jim Fox bench interview. Willie D. goes “Weekend At Bernie’s”, barely answering with a pulse.

16:35—Jim reminds us that the first curious thing about the Kings season was the way Kovalchuk was used and his lack of playing time. Player usage, team chemistry and line deployment may be the single reason that the Kings have frequently occupied the 31st and last position in the league.

16:42—When you open the Hockey Dictionary and turn to the definition of “Hooking” you’ll see this hook from Tyler Toffoli. That’s the textbook example of how you do it. Wild to the power play where they are 89+ percent at home this year. For those of you who were promised no math, that means Minnesota scores on 89 out of 100 chances with the man advantage. Yikes!

16:58—Carter and Carl Hagelin on the 2-on-1 break, but Carter’s wrister goes off Ryan Suter’s stick, striking the crossbar and deflecting out of play. So close!

17:53—Kopitar and Brown on another shorthanded 2-on-1, but Alex Stalock comes up big for Minnesota.

The Kovalchuk goal looms large because the Kings are winless when they trail after two periods (0-20-1) and 5-4-1 when tied after two. Kings a step slow all night. If not for Quick, it could be 5-1 or worse.

Have I mentioned tonight how great these telecasts are without Mike Milbury’s anti-Los Angeles Kings rhetoric spewing during the intermissions?

4:12—Jonathan Quick under fire with little cover this period as the Kings have been outshot 5-1 already. All five shots looked to be high quality. Seems like a matter of time before the Wild surges ahead.

7:13—Eric Staal loves to score against the Kings. That one left Quick talking to himself as he regroups with his Gatorade bottle.

14:27—Stalock with the diving save on Martinez and then Alex Iafallo. So close again!

17:30—Besides everyone who ever watched hockey, who knew that putting bodies in front of the goalie and crashing the net would produce goals? For the second time tonight, the Kings do just that and the game is tied at two. Jeff Carter with his second goal in as many games off an accidental Adrian Kempe deflection. And that Tyler Toffoli blast to set it all up! Assist to Willie D. putting Kempe–Carter–Toffoli together. (Yes, that was a one-time exemption compliment directed at Willie D.!) Good times right now with two and an half minutes left.

Kings with the point they really don’t deserve. Heck, let’s steal another!

00:18—Quick with two stops already of a 2-on-1 break. Have we mentioned that the Kings would be cooked without Quick tonight?

00:32—Stalock misplays and almost scores on himself. So close!

2:00—Doughty to the box. Goalie interference. Could have easily gone against the WIld. Stalock needs to learn how to face-wipe because he looked like a cornered cat slapping the air against a dog as he tried to exact some revenge against Doughty crashing into him.

4:00—Quick with three stops on that penalty kill. Those weren’t your average stops, more along the acrobatic level of stops. Typical Quick.

No rhythm in OT thanks to the questionable penalty. Onto the shootout.

Kings outplayed, but steal a point and pull out of last place in the league. Still remain the front runner for Jack Hughes. Cruel road schedule looms just prior to the trade deadline; lots of nervous veterans in that Kings locker room.

NEXT: The Kings take on the Dallas Stars on Thursday from the American Airlines Center.

“I honestly didn’t get a look at it [Drew Doughty’s penalty in overtime]. I was watching Kopitar with the puck. I didn’t see what happened at the net.”

…on earning a point in the standings:

“I mean, yeah, he’s a skilled guy. He makes plays. You know, his goal — there wasn’t a lot involved. He drove the net and when you go to the net, even on my goal, you go to the net and pucks bounce around and we were able to whack a couple in. But he’s a high-skill guy and he’s obviously playing with Kopi and Brownie, which is a real good line and hopefully he can keep it going for us.”

“It wasn’t the prettiest game we’ve ever played, but we did what we had to do. We battled. I thought we were skating pretty well.”

”I thought we deserved it. We played 65 minutes really hard. There was no let-up tonight.”