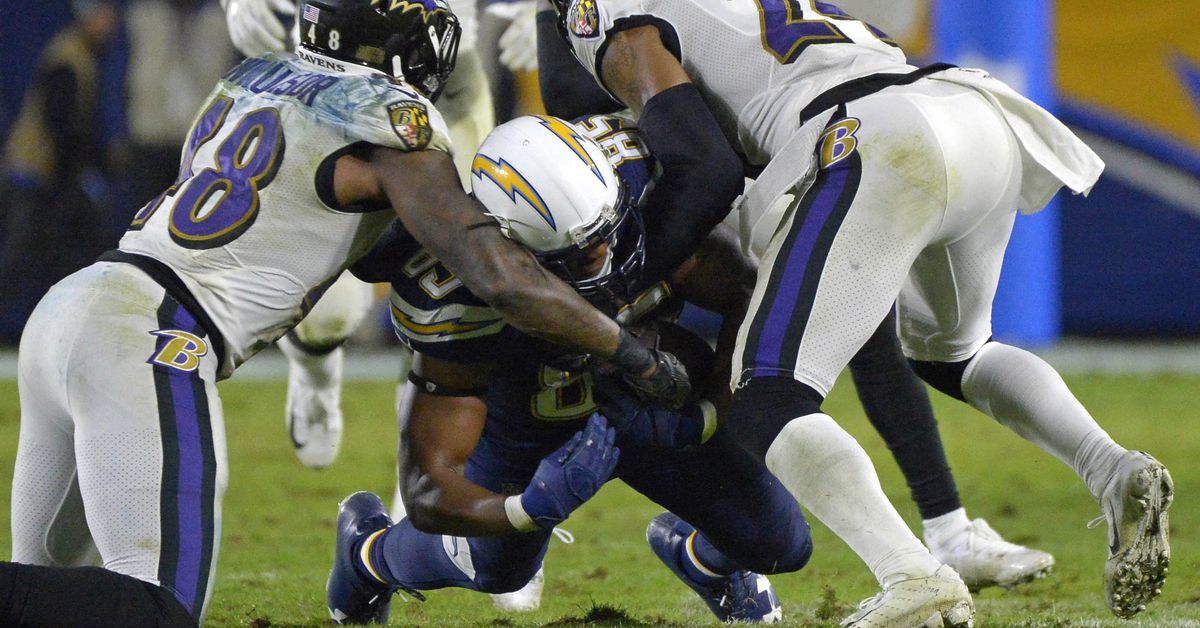 Ravens punish Philip Rivers, Chargers to bolster playoff outlook – Michael Middlehurst-Schwartz
After mounting big late surges to topple the Steelers and Kansas City Chiefs the last two weeks, the Chargers couldn’t recreate the late spark. Despite being held to a season-low 72 yards in the first half, Los Angeles remained within striking distance for most of the night and briefly led after a Melvin Gordon touchdown. But penalties were particularly problematic, as

Refocused, NFL Week 16: Baltimore Ravens 22, Los Angeles Chargers 10 – PFF Analysis Team
Philip Rivers lives in a perpetual state of pressure that when he actually has a clean pocket to throw from, he doesn’t know how to handle it. The Chargers’ offensive line had a dreadful performance, as they simply couldn’t handle the exotic looks and stunts the Ravens’ front seven deployed.

Quick Observations from the 22-10 Loss to the Baltimore Ravens – Hayley Elwood & Ricky Henne
Three plays after the forced fumble and fumble recovery, the team capitalized on the turnover as Melvin Gordon ran in for the touchdown to take a 10-6 lead. However, Baltimore wasted no time getting back into the game as they took one minute off the clock and went 85 yards in two plays as Lamar Jackson connected with Mark Andrews for a 68-yard touchdown and regained the lead, 13-10.

Chargers waste opportunity as offense stalls in loss to Ravens – Eric Williams
“We didn’t play as well as we have played,” Rivers said. “And if we were going to have one like this, better now than later. But we’ve got to regroup, have a good week and then find out where we go on that first week in January.”

Chargers fumble away chances to win AFC West in loss to Ravens – Travis Wakeman
After a holding call erased an 8-yard run by Melvin Gordon, Philip Rivers hit Antonio Gates over the middle but he had the ball punched out by Patrick Onwuasor milliseconds before his knee hit the ground. Tavon Young then scooped the ball up for the Ravens and raced the other way for the game’s decisive score.