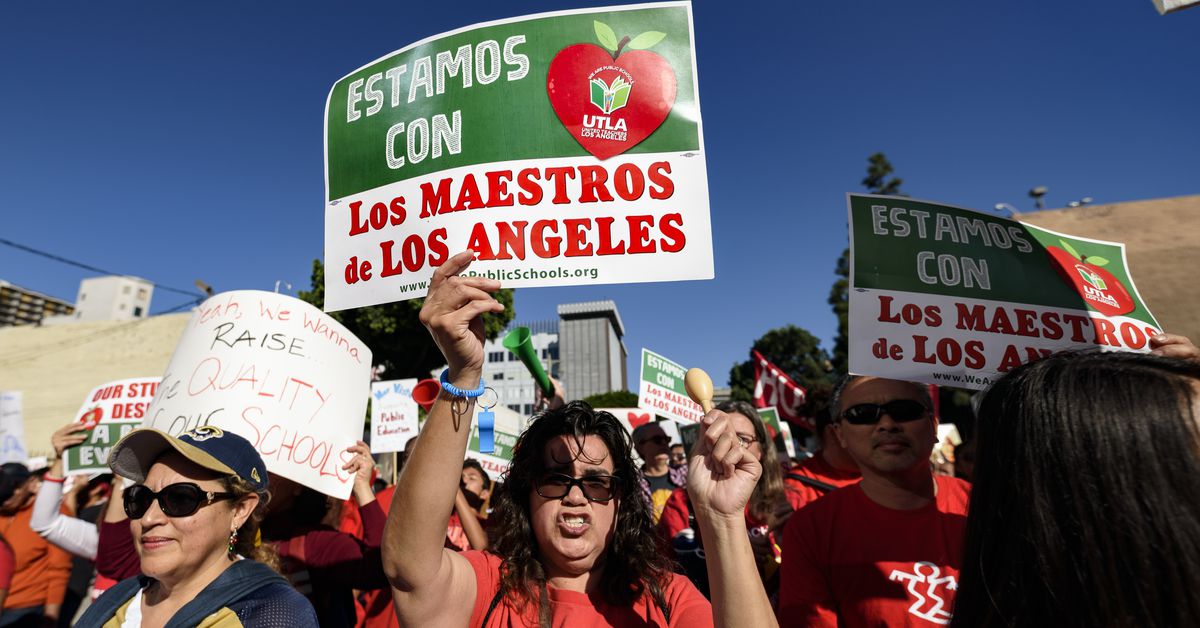 Monday morning, tens of thousands of Los Angeles educators will leave their classrooms and go on strike, throwing the weight of the country’s second-largest school district behind a growing national movement for better school funding and higher teacher pay.

The strike comes after months of fruitless contract negotiations between the teacher’s union and the Los Angeles Unified School District. The school system extended a last-minute deal on Friday, but organizers rejected it, saying they’re fighting for the future of the education system — with implications that extend beyond the district’s borders.

“Get ready, because on Monday, we will go on strike,” Alex Caputo-Pearl, president of United Teachers Los Angeles, said at a news conference late Friday.

Union leaders in Los Angeles expect some 31,000 teachers, counselors, nurses, and librarians to walk the picket line this week. Like the string of striking teachers who preceded them, they’re fighting for a raise. But they have larger grievances: They say that class sizes are so large, there aren’t enough desks to go around. That the proliferation of charter schools is leading to an over-tested student body and a system that treats education like a business rather than a right for all students. And that staffing levels are so low, some schools lack a single nurse or librarian.

Officials from both the state and district agree they need to invest more into students’ education — just not to the level that the unions demand.

The last time LA’s schools saw a strike was 30 years ago when 20,000 teachers walked out of their classrooms for nine days. This time, union leaders want to make a major contribution in the fight for education, setting the tone for 2019 with first walkout of the year.

School district officials and union leaders have been negotiating a new contract since spring 2017, with little to no headway from the start. Each of the union’s demands would cost money — money they say the school system has and the district says it could never afford — but what’s really at stake is the direction of education in the district.

Both sides have data to back them up, but as the Los Angeles Times’ Howard Blume notes, the negotiations have morphed into an intense, personal dispute, in which “hyperbole, passion and spin have often trumped fairness, moderation and neutrality.”

In August, 98 percent of union members voted to authorize a wide-scale strike, and it’s been in the planning stages for months. (The school board responded by authorizing $3 million to hire substitute teachers who could cover classrooms in the event that full-time teachers walked out.)

Here’s what the teacher’s union has demanded:

The district has tried on several occasions to limit the scale of the planned strike. Last week officials went as far as asking a federal court to block teachers who work with special needs students from leaving the classroom. The court instead threw out the district’s request for an injunction, clearing the way for the strike to move forward.

It also included provisions administrators had previously offered earlier in the week:

Union leaders rejected the offer on Friday, calling it “woefully inadequate.” They are demanding a 6.5 percent raise that includes retroactive salary bumps for the previous year, and higher levels of support staff to meet the district’s needs.

The teacher’s union believes the district can afford it. An independent report found the district has $1.8 billion in reserves, a sum that’s been growing significantly over the last five years, up from $500 million in 2014.

But Superintendent Austin Beutner says much of those funds have already been ear-marked, and based on future projections, the district’s finances will be insolvent in a matter of years, thanks to burgeoning pension and retiree health benefit outlays. If they met all the union’s demands, Beutner says, it would cost up to $3 billion and plunge the district into bankruptcy.

“If they want a strike, they’ll have a strike,” Beutner said at a press conference on Friday. “We’re doing everything we can to avoid it.”

Los Angeles has one of the largest school districts in the US, second only to New York City. More than half a million students attend the Los Angeles Unified School District, which encompasses over 700 square miles of the metropolitan area, from South LA to Bel-Air to the San Fernando Valley.

Much of the student population is poor and underserved — some 80 percent of kids qualify for free or reduced-price lunch. And according to the LA Times, nearly a quarter of them are learning English.

Beyond providing education, LA schools are a source of much needed child-care for parents, consistent meals for students, and resources for their health and special needs. This means that a wide-scale strike, such as what’s planned for LA, is likely to have a resounding effect on the very people the protest is ultimately trying to benefit: students.

Schools will be open no matter what — administrators, volunteers and a legion of newly hired substitute teachers are expected to fill in the gap while union members are on the picket lines, but that should leave staffing levels at roughly 8 percent of coverage for a typical day.

There’s no telling how many students will show up to school on Monday to learn from those skeleton staffs. Union organizers are asking parents to join their strike in solidarity — one Facebook group that has more than 100,000 members, “Parents Supporting Teachers,” is calling on others to show up Monday, the LA Times notes — but for most, it will likely be a struggle between juggling work and childcare.

Still, administrators say the strike is no excuse — students who don’t show up will be marked down as an unexcused absence.

The lead-up to LA’s strikes has been months in the making, building off of the success of high-profile teacher’s union strikes nationwide.

What had united many of these strikes and walk-outs is that they took place in conservative states: In Arizona, West Virginia, Kentucky, and Oklahoma, teachers walked off the job, fighting back against depressed wages that failed to keep up with inflation, yes, but also against decades of right-wing policies that had cut education spending levels to the bone.

As Vox’s Alvin Chang explains, “over the past several decades, state lawmakers have systematically divested from public education,” leaving many non-affluent children with a second-class education:

The root of these education cuts started decades ago, when state legislators gave tax cuts to the wealthy and corporations during times of economic prosperity. The hope was that it would spur economic growth — but that growth never came. When the economy turned south, states needed to raise more revenue.

But conservative lawmakers refused to raise taxes; they just cut spending. And because education often takes up the largest portion of state budgets, schools were hit especially hard.

Like the others, LA’s teacher battle boils down to funding. By one estimate, California ranks 41st in state spending per student, when adjusted for cost-of-living. But what’s unique is that both the district and unions agree that more funds must be spend to benefit children’s education. They’re not fighting over tight austerity measures or tax cuts for the rich.

LA’s union leaders want their strike to make a statement about the future of the public school system and the encroachment of charter schools. Because they know: Major changes to a single region that is home to 700,000 school-age children could set the tone for the progressive education fight across the country.