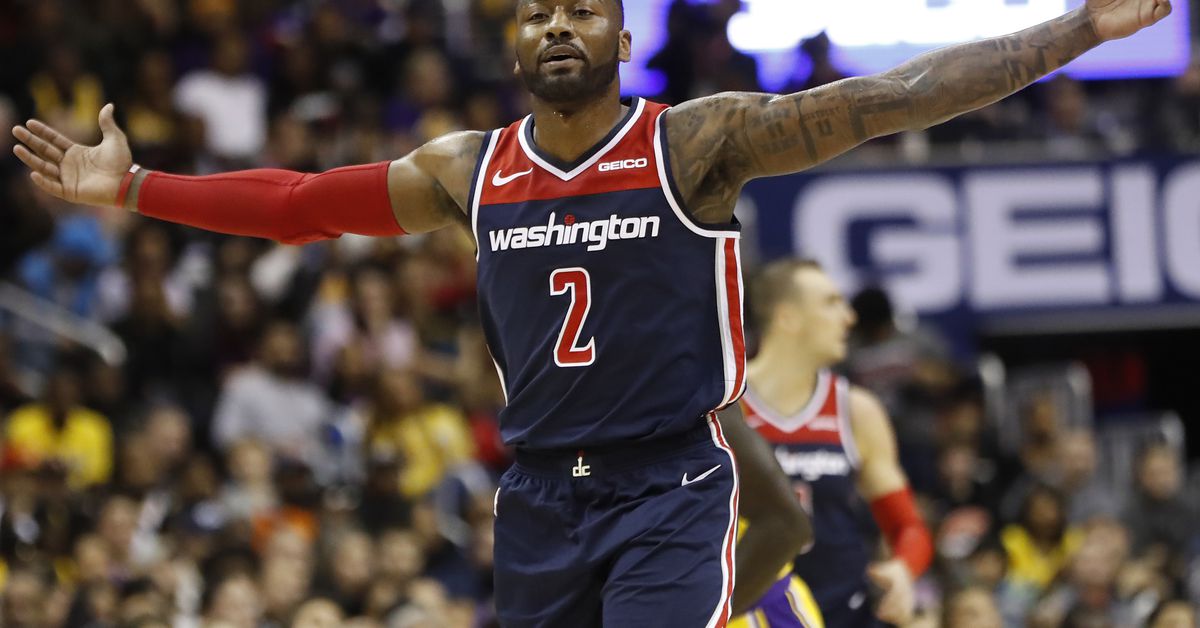 Things usually don’t end well when LeBron James steps foot in Capital One Arena. But tonight, Washington limited James to just 13 points and flipped the script as they ran the Lakers off the court, 128-110 on Sunday evening.

John Wall led the way for Washington with a season-high 40 points for a shorthanded Wizards team playing without Otto Porter for the third straight game and the newest member of the Wizards, Trevor Ariza, who had to sit this one out until the trade is officially approved by the league.

Bradley Beal scored 25 points tonight, the eighth straight time he’s eclipsed the 20-point mark and Jeff Green and Sam Dekker added 20 a piece for a Wizards squad that teased us for a night, showing us what this team could look like when they’re clicking on all cylinders.

Washington stormed out in this one on a 24-8 run over the first five minutes of the game forcing Luke Walton to burn two early timeouts. The Wizards were on fire as they connected on their first five field goals and 12-17 overall. But after nine brilliant minutes of basketball, the Wizards were a bit too loosey-goosey to close the quarter as the Lakers used a 13-5 run to cut the Wizards lead to 10, 33-23 after one quarter.

Things really opened up for Washington in the second quarter as they were able to push the pace. The Wizards used to pride themselves on getting out in transition but that hasn’t been the case this season. Tonight, the Wizards looked like their old selves as they relentlessly pushed the ball, especially on live ball Laker turnovers which allowed them to take control of the game midway through the second quarter.

And with just seconds remaining in the first half, Wall hit this arcing jumper of Tyson Chandler as the Wizards took a 71-51 lead into halftime.

Washington’s lead ballooned to 27 points at one point in the second half and the Wizards barely had to break a sweat as the Lakers never came within striking distance. Capital One Arena was filled with many purple and gold uniforms hoping to see a big game from James but they were silenced as it was Wall that stole the show.

John Wall turned in by far his best performance of the season with 40 points, 14 assists, and 6 rebounds, with most his damage coming in the first half. Wall came out like a man on a mission early on as he pushed the ball in transition and fearlessly attacked the rim, very reminiscent of the 2016-2017 version of John Wall who made an All-NBA team.

The biggest difference from Wall tonight came on the defensive end and that set the tone for the rest of the team. Wall was much more energetic both on the perimeter end and when LeBron tried backing him down in the post? He didn’t back down from the challenge.

Wall snagged three steals and had two emphatic blocks making everyone wonder, where is this defensive effort on a nightly basis?

Offensively, Wall was equally as impressive too. The Wallstar looked to get out in transition and would either find his teammates for easy baskets or he’d fearlessly attack the rim. Tonight was one of those nights where guys had to keep their heads on a swivel because if you were open, John Wall was finding you.

Here, he threw a between the legs pass in transition for Sam Dekker who did the rest:

And here, he easily penetrated the paint to find Thomas Bryant for an easy dunk:

An outstanding first half sets the tone for the night

On the heels of a trade, shipping Kelly Oubre Jr. and Austin Rivers out to Phoenix just one day ago, it was unclear how the Wizards would come out to start this game. However, all of those questions would be put to rest early on in arguably the Wizards best half of the season.

Washington stormed out of the gate for double-digit lead just minutes into the ballgame. The Wizards connected on their first five field goals and 12-17 overall and if they would have been able to knock down some of their open three-pointers, the first half could have been even more lopsided.

Washington came out with an energy and sense of urgency that we’ve seldom seen this season. Guys were active defensively evidenced as they logged eight steals in the first half and turned 14 Lakers turnovers into 17 first half points.

The Wizards dropped 71 points and were up 20 on halftime that begs the question, why can’t Washington bring this kind of energy in heck, 75 percent of their games?

Sam Dekker turns in his best performance in a Wizards uniform

He’s only played in four games for Washington, but tonight, Dekker showed that he has the potential to be a rotation player for this team. Dekker, who saw more minutes due to not only the absence of Porter, Ariza, and Kelly Oubre Jr., but he also got more playing time as Markieff Morris caught an elbow in the first half to the head and missed the remainder of the game.

Dekker scored 20 points on an efficient 10-15 shooting to go along with five rebounds and four assists. Most thought the trade for Dekker was just a cash saving move and that he’d rarely see the floor. Tonight might have folks thinking otherwise.