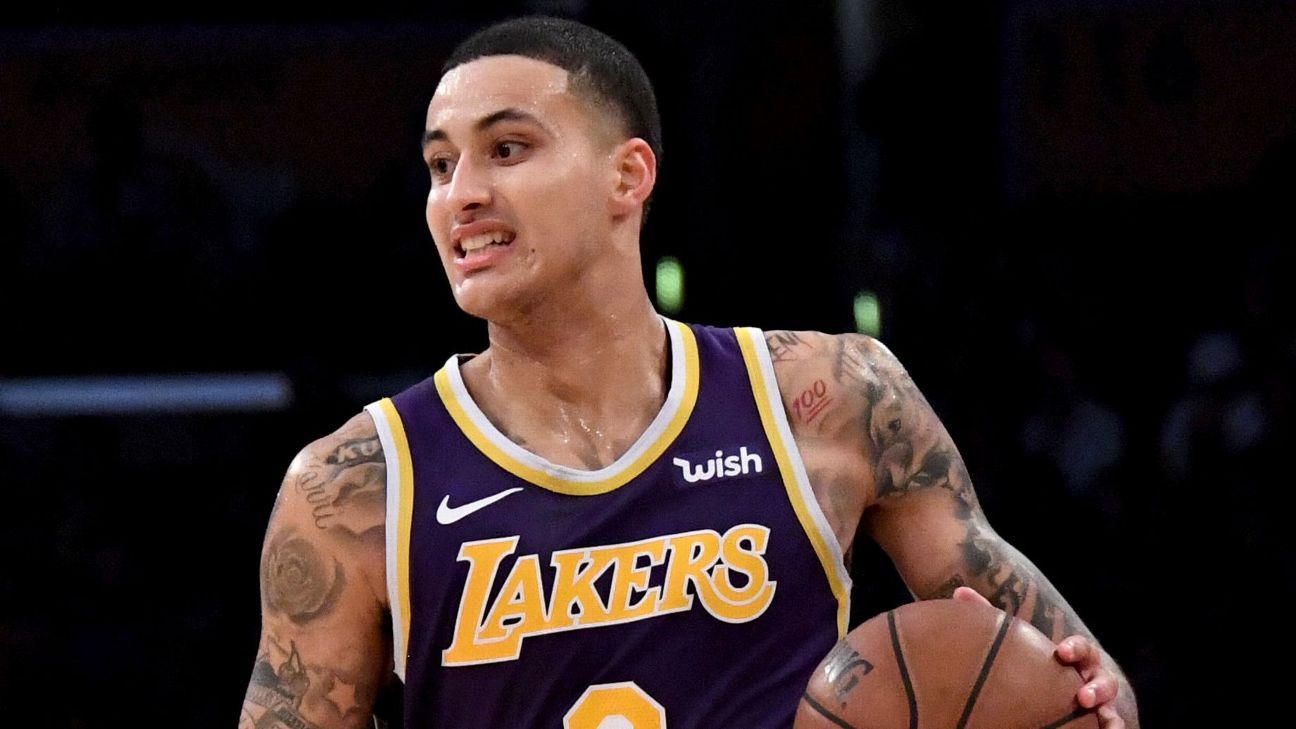 LOS ANGELES — A week after suffering a lower back contusion and two days after missing 16 of the 20 shots he attempted in his return to the court, Kyle Kuzma scored a career-high 41 points in the Los Angeles Lakers‘ 113-100 win over the Detroit Pistons on Wednesday.

And he did it in just three quarters.

“My teammates allowed me to get a lot of shots, finding me,” said Kuzma, who shot 16-for-24 from the field and eclipsed his previous best of 38 points. “And I think for the most part everything was in the rhythm of the offense, which was a good thing for everybody.”

Kuzma, who says he grew up modeling his game after Kobe Bryant, warmed up pregame wearing a pair of Nike Zoom Kobe 1s, the same model Bryant wore when he scored a franchise record 81 points.

Kuzma got a kick out of the meme circulating after Wednesday’s game showing a smiling Bryant giving a thumbs-up with the caption: “Kuzma dropped 41 with no assists?? MAMBA MENTALITY.”

Lakers coach Luke Walton, who has urged Kuzma to expand his game in his second season by looking to pass more, took a good-natured jab at Kuzma’s zero-assist total on a night when the Lakers notched 30 assists on 46 baskets as a team.

“It felt like [the ball] was skipping around out there until it hit Kuz’s hand, and then it was going up every time,” Walton said with a smile.

“I was still trying to look for teammates,” he said. “My assists don’t reflect that, but if I’m open, I’m going to shoot.”

Kuzma, a native of Flint, Michigan, had extra motivation to shoot against the Pistons, with plenty of friends and family tuning into the game back home.

“It’s pretty cool, honestly,” Kuzma said. “That’s the team I grew up watching. My fondest memories is them beating the Lakers [in the 2004 NBA Finals]. Bit of a coincidence. But it’s pretty awesome, especially to do it in Staples [Center] is awesome.”

It was the Lakers’ second straight win, making them 3-5 since LeBron James (groin) and Rajon Rondo (ring finger surgery) went out with injuries after Christmas Day.

And it was a much stronger performance for Kuzma than the 13 points on 4-for-20 shooting he had in the Lakers’ win in Dallas on Monday.

To make up for that off-night, Walton said Kuzma reported to the Lakers’ practice facility on Tuesday — even though the team had the day off — and attempted 500 jump shots.

“I know I’m a great shooter,” Kuzma said. “My percentages may not reflect that, but I’m always confident in shooting, and I’m always in the gym just trying to continue to put work in every single day, and it paid off today. Just got to continue to be consistent with that.”

It wasn’t lost on Kuzma either that in the same season Bryant scored 81, he preceded it by scoring 62 in three quarters.

With the Lakers extending their lead to 23 points and Kuzma wearing a heat pad on his sore back, Walton kept him on the bench in the fourth quarter even though there was some history at stake. Had Kuzma hit for 50 points, he would have joined James as the only Lakers teammates to score 50-plus in the same season since Elgin Baylor, Jerry West and Rudy LaRusso did so in 1961-62, according to research by ESPN Stats & Information.

Kuzma said he was fine with Walton keeping him on the bench because it opened the door for Michael Beasley, who turned 30 on Wednesday, to shine.

“I was happy for Beas,” Kuzma said. “It’s his birthday, and he doesn’t get the most playing time like a lot of us. I was cheering him on. I was happy for him.”

Beasley, the former No. 2 pick out of Kansas State, scored 15 of his 19 points in the fourth, finishing 9-for-13 from the field in 19 minutes. The performance came after he scored 13 points in nine minutes against the Mavericks on Monday as he continues to reacclimate himself with the team after missing nearly all of December because of the death of his mother, Fatima Smith, who died of cancer.

Beasley credited his teammates for helping him through the tragedy.

“It means everything,” Beasley said. “I love these guys. They make life a lot easier.”