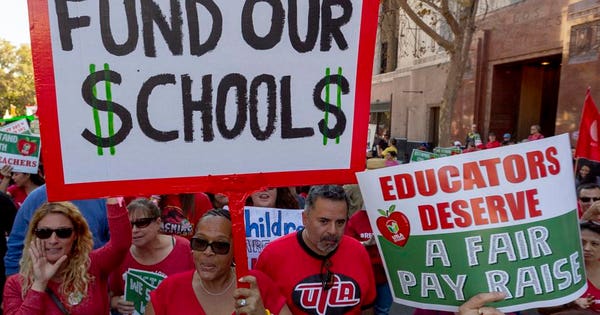 In my entire teaching career, I was in two teacher strikes; one as a newly hired first year teacher, the other as the president of the local association. The on-the-ground specifics of every strike are different, but both experiences underlined what I have come to believe is true of all teacher strikes:

Teacher strikes happen because teachers believe they are out of alternatives. There has never been a union meeting in which members said, “The board says they’re willing to talk, and we trust them to do so in good faith, but we think we should strike instead.” Teachers strike because they face issues that can’t be ignored and a board that won’t sit down to help solve those issues. Even then, teachers strike reluctantly. Strikes don’t happen because the most active, cranky members are ready to walk, and strikes don’t happen because local, state or national leaders convince the rest of the members to walk. Strikes happen when school district leadership convinces the most strike-averse teachers that they are out of options.

That’s what makes the L.A. strike, like the statewide strikes in West Virginia, Oklahoma, Kentucky, Arizona, Colorado and Washington, so extraordinary. If you have not worked in union leadership, I’m not sure you can imagine just how difficult it is to push that many teachers to undergo the stress, uncertainty and trouble of a strike. No union leadership could do it without the assistance of the local school district’s board and administration, or the politicians overseeing education on the state level.

This part of the L.A. strike is not new. Teachers strike because they want to be able to do their jobs with a decent standard of living, without having to constantly watch their backs, under conditions that allow them to do the best they can, and with a sense that they’ll leave a stronger school for the future. Teachers strike because they have stopped believing that their school board can be trusted to help them pursue those goals. All of this has been true of every teacher strike ever.

But in L.A. (and West Virginia and Oklahoma and the other #REDforED states) there is a new factor.

In my two strikes, and in virtually all strikes of the past, we could make one assumption safely–that as much as we disagreed about the means, everyone wanted, in their own way, to see the public school district remain healthy and whole.

This is no longer a safe assumption on the local, state or national level.

LAUSD Superintendent Austin Beutner came to the job with no background in education. This is no longer unusual in large districts, nor in state school leadership positions. Increasingly the agenda of many people taking positions of authority over public education is to dismantle public education and replace it with a network of private charter schools, a process often accelerated by starving public schools for funding in order to manufacture a crisis. And lest we forget, current secretary of education Betsy DeVos once declared that public schools are a “dead end.” Beutner’s comment to a reporter regarding the strike was “There are ways to educate kids that don’t rely on a physical body.” Teachers are not necessary.

L.A. schools particularly feel this privatization push. Eli Broad has long been a wealthy advocate of approaching education as business, and through Great Public Schools Now, announced in 2016 a bold plan to move half of Los Angeles students into charter schools. Currently charters have enrolled one in five of LA students. Last fall, charter school advocates poured millions of dollars into LAUSD board elections in  order to install a charter-favoring majority on the board.

Teachers in many school districts and many states across the country find themselves in the unusual position of working in an institution led by people who want to see that institution fail. Back in the day, teacher strikes were about how best to keep a school district healthy, but these modern walkouts are about the very idea that public schools should be kept healthy at all. UTLA demands for smaller classes, more support staff, safer schools, community schools, and charter school oversight are not about making their working conditions a little better, but about keeping public education alive and healthy.

Teachers across the country are dealing with the problems created by systematic underfunding of public schools and a systematic devaluing of the teaching profession by leaders who believe that public education should be swept aside to make room for a system of private free market education. Of all the reactions to this, the #REDforEd movement and the wave of strikes are actually the good news, because these are the teachers who intend to stay and fight for the future of public education and the students it serves. When those walkouts are settled, the teachers will return to the classroom. The bad news? The oft-noted teacher “shortage,” is really a slow motion walkout of teachers who will never return to the profession at all.

When the teachers of my district walked out years ago, it was a small strike that attracted little attention outside of our area because our issues were strictly our own. When Los Angeles teachers walk out, it will resonate across the country because the issues they walk for are about the health and survival of public education for children in their communities are the same issues that teachers all across the country are struggling with as well. That’s what makes this strike, like last year’s wave of state strikes, different–many teachers will see it not as simply a local battle, but as a skirmish in a larger national fight.